This is probably one of the best UFO sighting's that we will ever have the privilege of seeing. It's a carbon copy of a 1990 UFO sighting in the UK.

These are the most bonkers UFO sighting's we will probably ever see and the fact that these are been filmed, 30 odd year's apart makes these historic in my view.

Either way we know that one (at least) happened and as it stands there's no loser's in this UFO sighting because even just one of these UFO sighting's being real "changes everything" and I love these types of incredible UFO stories. 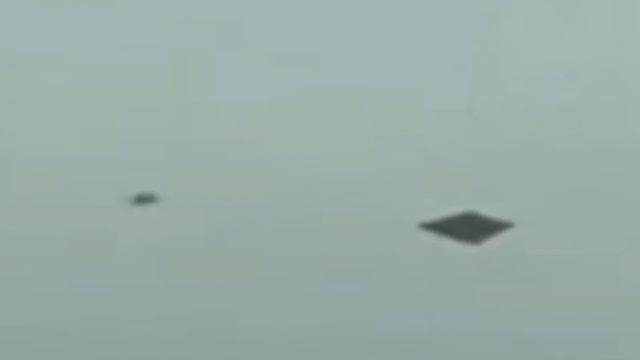 Above image is a recent UFO sighting over Ventura, CA USA.

Even if just one of those UFO sighting's is real it's historic! Do you know how many UFO sighting's with no loser's come along? Hardly ever? That's incredible news because no matter what happens, Ufology wins the day.

This guy's just driving down the highway near Ventura, CA, USA (we see the road sign) minding his own business and he looks up to see two aircraft motionless in the sky! They're not moving at all.

That's the part where reality start's to disappear from under your feet and Neo run's past on his morning jog. Because that right there is a glitch in the Matrix.

Seriously, we could be witnessing history repeat itself because believe it or not this near enough exact same thing happened before in 1990! It's pretty much a replica UFO sighting. It bring's up the obvious question "where do UFOs actually go when they're not flying around our atmosphere?"

Retired RAF officer Craig Lindsay, now 83, broke protocol and kept a copy of one of the pictures inside his copy of Great Aircraft Of The World in his desk.

This happened in 1990 and it's exactly the same UFO set up. The unofficial story is that the 1990 sighting could be the Aurora spy plane program? I'll post below a 1990 image and the recent Ventura, CA, USA UFO in the shape of a Diamond with the accompanying aircraft. 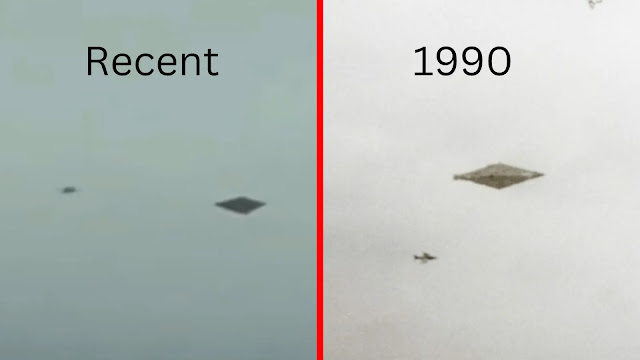 I'm pretty sure (actually I'm hoping) that people will have something to say about these two spectacular UFO sighting's? If you know me you'll already know that I don't believe in coincidences and I never will because everything happens for a reason!
Therefore I believe that what we're seeing here is a real UFO sighting and is probably one and the same UFO?
It was supposed to have disappeared forever because the newspaper gave it to the military and it disappears! But RAF Officer Craig Lindsay kept a copy...

I have belief's and so I stick to them because I've proved to myself in other different scenarios and on numerous occasions that it works. Not believing in coincidences "whatsoever" I've proven in the past to myself!

Both chef's that hid in the bush said they saw a huge, solid, diamond-shaped object, about 100ft long, hovering silently in the sky which was above them. And it flew straight up. We have no reason whatsoever to disbelieve them. The military thought it had taken care of the photos forever!

So, I'm definitely going with this being a real UFO sighting. You can't make this stuff up, and you can take that to the bank. Some people give their UFO story and we take them at their word. But some we don't, is that right do you think?

Here's a quote regarding the 1990 Diamond shape UFO:

The jet came back and circled the 'thing' before heading off on its original course, as if the pilot had seen the object too and had come back for a closer look.

Eventually the two men (chef's) stuck their camera out from where they were hiding and fired off six frames. At that point, the object shot vertically upwards and disappeared way, way up in to the sky.

The most recent UFO sighting has the eye witnesses testimony "as and when the UFO sighting was happening" that's in real time when we get the testimony which are the best types of evidence. Because it's not relying on memory you see, it's actually occuring. He's seeing it happen and then he tells us what he's seeing.

Perfect information, it's as fresh as any information can be. I rate it above testimonial after the fact.