This has to be the best UFO sighting that's ever been filmed on camera. The ISS live feed was rolling when the person who pressed record caught this.

I've never understood why NASA doesn't want us to see the UFOs that are constantly turning up at the International Space Station, until now.

I'm starting to think about thing's a bit different now because NASA could be protecting us from knowledge of a really bad Alien race? 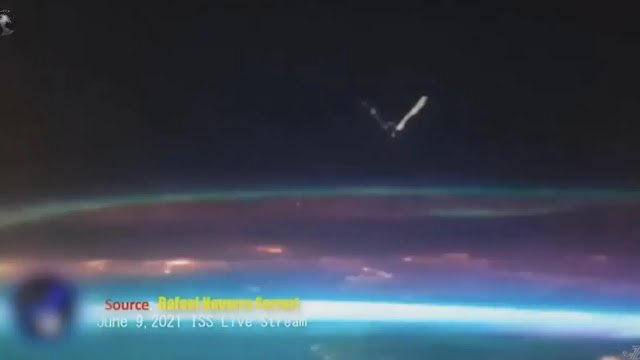 In my view, this is the best evidence of Extraterrestrial life in space that has ever been caught on any camera, ever! It's without doubt a top 3 best UFO contender ever caught on camera, for sure. 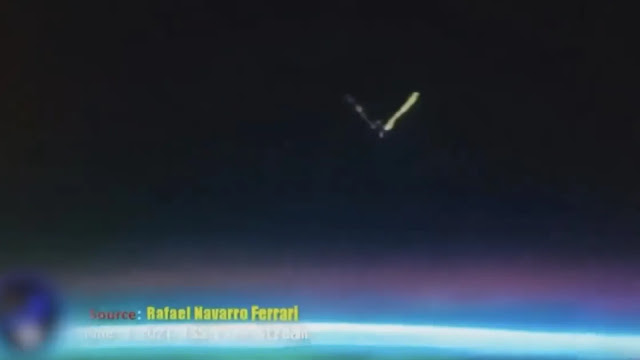 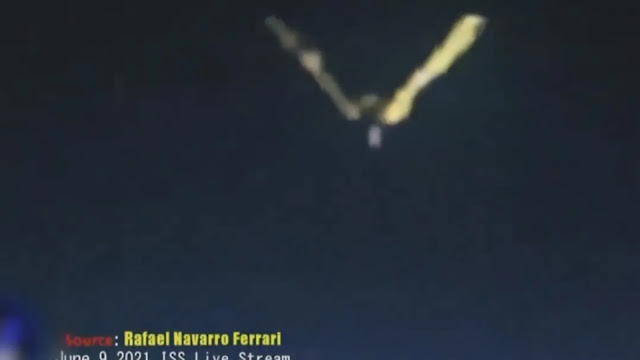 Why else would we be prohibited from knowledge of Extraterrestrial life?

It must be bad knowledge, right? And just because I'm "maybe" starting to understand why NASA's keeping it from us, I'm definitely not agreeing with it.

We should still have the right to know?

This was on the ISS live feed cameras on June 21st, 2021 and was caught by Rafael Navarro Ferrari.

I'll never agree with NASA keeping it top secret (by it I mean UFOs) or trying to wipe it from existence. When you've got an inclination of wrongdoing by a supposed trusted and respected agency like NASA but discover through research that they're anything but...

It's really hard to understand and believe to a certain degree but the research speaks for itself.

How big or large is this UFO ie spacecraft?

While I don't agree with the assessment given by the guy in the video, it's still an extremely large vehicle. He says it's hundreds or thousands of kilometres long... Hmm, I'm not sure how he's come to this conclusion? Perhaps he's mistaken because if this spacecraft was hundreds or thousands of kilometres long then holy wow that'd be absolutely unbelievably immense and it wouldn't fit in the screen!

It wouldn't fit the screen, that's for sure! That thing is between the Earth and the ISS - so taking that the ISS is actually only 227 nautical miles above the Earth and as you can see what he's saying just doesn't make sense at all?

Anyway's let's just focus on the Earth for a second because we can see the amazing glow of the Earth's reflection from the Sun and it's lighting up the underside of this craft brilliantly. In fact it's this which is giving us the ability to work out it's shape which is a fantastic and futuristic V shape.

In fact it's almost like a Maple seed or "copter seed" as they're know as. So we do find this shape in our nature and we humans are familiar with this shape. But how did Extraterrestrial entities settle on this shape for the craft?

We have a process of choosing a shape for Aerial vehicles based on aerodynamics as our atmosphere has air and shapes move efficiently when shaped specifically.

Sometimes we take inspiration from our nature, is that what we're seeing here perhaps?

I'm a massive believer in life beyond Earth and so my questions will reflect that. I often wonder how similar we might be? Science and scientists would tell us that we'd have mathematics as a common ground or something that we'd likely have in common? It makes sense.

Scientist's like to speculate about life outside of the Earth but stop short on saying that it's so. They speculate but will not commit to it, I wonder if they even believe their own argument!

The owner's of this spacecraft (that's what it is) might already be here on Earth? It looks like it's parked up to me?

They can actually out manouver anything that we have. They have craft's that can out turn our craft's every single time. Their's are faster than what we have, smaller than ours and basically our stuff versus the UFO sighting's stuff is lame! We're effectively the Victorian's compared to the technology that UFOs have! We're still focused on stealth technology for heaven's sake!

"I can see you, from a billion miles away all the enemy has to do is look up!"

Over decades we've been seeing UFOs and they've been filmed looking small, extremely fast and can vanish. They pay no attention to aerodynamics because that's uniquely an Earth's atmosphere problem. UFOs don't have such problems to worry about I assume because of the technology that it operates on.

This might be why we see balls of light, Orbs and spheres which I believe are gathering knowledge on humanity. Earth answers can be answered from the other side of the universe just as we do with planet's that are in the Goldilocks zone or how we measure the light spectrum of planets.

Maybe why these UFO Orbs are here is because there's some thing's that can't be answered from the other side of the galaxy like humanity for instance. Are we being observed by these globe shaped and Tic Tac shaped UFOs? Probably the answer to that is yes.

I think we announced ourselves when we detonated atomic bombs and nuclear bombs plus hydrogen bombs etc. Our atmosphere gives off a perfect match for life with intelligence. If NASA was an Alien, they'd hit paydirt with the Earth!

If we're looking out for life in space, then it stands to reason that life elsewhere in the universe is also looking outward for life.

And we rang the doorbell!

Idiot's, we're all complete fools for being that guy who blink's first (so-to-speak) because we don't know one thing (supposedly) about life in space? Are they friendly or deadly? Considering that they refuse to engage with us... I'm going with deadly. Based on NASA always denying that they exist.

Based on, NASA always turning off the camera when one turns up.

Based on, the UFOs don't want anything to do with us, but yet are here!

Based on, they ignore us so do they want what we've got, but not a friendship?

All of it could be rubbish because that UFO could be a hoax and Extraterrestrial life doesn't exist, good night nothing to see.

Here's the extraordinary video which I'd like for you to make your own decisions based on your own thoughts and research: