El Cajon CA USA UFO sighting was filmed by James Nugent SDSkywalker88 and sent to UFO Sighting's Footage. This is a silver craft that looks real.

This UFO sighting is a really good one with the witness getting a good look at this, so much so that he was able to draw it also.

It really must have had an impact on the eye witness (Mr James Nugent) because he was able to draw it "in detail" which tells me that this really did happen near his home. 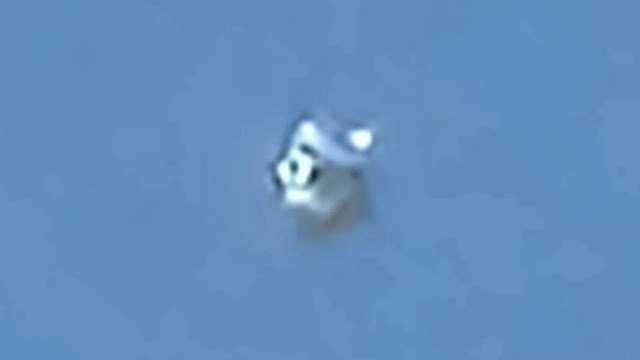 Sometimes I find it hard remembering what I had to eat the day before but I'm not an adventurous eater so it doesn't have an impact lol. But, I suppose if it was a one off caviar actually at a restaurant I'd remember?

This UFO sighting had an impact on the guy and it's definitely made an impression that's lasted till now.

It's a silver sort of craft or a odd shaped UFO that has a very different surface with lot's of protruding angles and what looks like a protruding round port hole with a circular black hole within it.

Like I say, it's a truly strange sight with nothing to compare it to that I can remember? I'm still going to put it through the trusty old image analysis software and let's see where else this has been filmed - if at all?

The only thing that I think comes close is one over Russia and one over in Texas in 2011. But other than that, like I suspected there's nothing like this unique UFO sighting. If you'd like to check out the results of the UFO image analysis of what I think comes a bit close then here's link 1 (Comicbook website) and here's link 2 (ABC News).

The UFO sighting over Russia actually happened while people were protesting against Putin way back in 2011.

I seen this object way off to the right and it flew the same distance height and speed across in a straight path it seemed way further than it appeared on the pictures and I think it's due to the odd geometric shapes that make it unrecognizable to anything we know. I am in talks with MUFON and a gov investigator.

And I knew it wasn't natural to our understanding, I felt like it knew I was looking at it and I felt a communication in some weird way like it was showing off. Very paranormal. Different shape and appearance than how it appeared in real life which was a shape-shifting square in a sphere . It did appear to disappear every so often but it was almost not noticeable. It looked like static or like some type of energetic field what the bubble appeared to be like a mirage.