Ukraine had a great UFO sighting that happened in 2019 somewhere over the Great European country. It's got 4 UFOs but could be 5 UFOs in the sky.

It's a truly wonderful UFO sighting which as we can see, there's a few of these strange looking craft's all together over a really flat landscape. 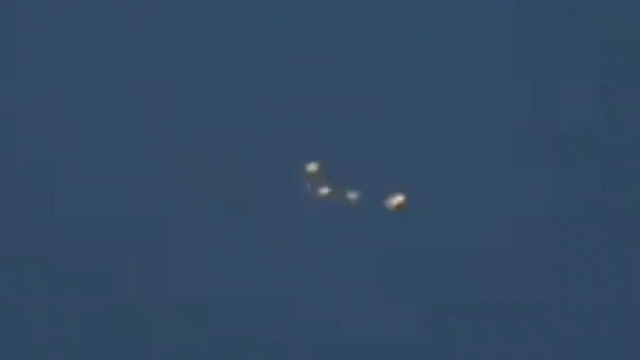 Ukraine is a fantastic place for UFO sighting's recently and in the past also. It's actually seen a lot of UFO sightings over the years and decade's just like everywhere.
What's their game, what's the UAPs plan, someone or something is controlling these craft's aren't they? They do not control themselves after creating themselves and from literally nothing so someone or something else created them.
What the hell are they doing here and is it good or bad? Everyone that has ever stalked something without contacting them, it never ends well. It looks like skullduggery all this constant flying around without contacting us?
It really sounds odd doesn't it what I'm writing about, it almost sounds like I'm talking about a movie or a sci-fi TV show. Are we being stalked by these UAPs because the US Government has stated that they are most certainly real and not from Earth. They did state that it's a phenomenon and I suppose it's up to us to interpret what phenomena entails? What's your understanding of a aerial phenomena? I think it means that it's off worl in origins. They exhibit intelligence and skill's not unlike our own human intelligence. The UAPs are actively trying to avoid us and we are actively trying to contact them but they're to fast, fly erratic and they can go trans-medium.
Here's a quote about trans-medium from 20th July:

The Pentagon announced that it renamed and expanded the authority of the government’s chief UFO office. Formerly known as the Airborne Object Identification and Management Group, the office will now be known as the All-domain Anomaly Resolution Office, or AARO. With the new name comes increased responsibilities, the Defense Department said in a statement. While the group was mostly focused on airborne and threats in space, the renamed office will also look into unidentified objects that are submerged in water or deemed "transmedium."

If you read up on specific part's of the whole announcement and disclosure of UAPs and plus the Pentagon's responsibilities, you'll absolutely 100 percent be dumbfounded! Ney, you'll have your mind blown because it's simply put "Earth shattering news" and it goes against everything we've ever been told!
Transmedium:
In otherwords they can fly from the sea, the air and into space and vise versa - in no time at all. You've all seen the videos and keep them in mind because with time comes the inevitable grey area which they will jump on and start trying to put doubt in our minds that what happened, never happened or even they will push a different, softer version of it. I've seen it done before for other UFO sightings where as time goes by they try to warp or manipulate our memories of what happened by talking about it in different ways. Because later down the line they realise what they've said and will start to back track on it. A bit like when someone tries to back out of a deal after having a good night's sleep because they realised the bigger picture of what they said the night before.
So just be aware of that, remember exactly what they said and what happened.
A military Jet was behind a UAP sphere which was going against the wind, I assume because of the military jets chasing them is why they flew off? That tells me that the UAPs don't want to be contacted, but yet they're on Earth and we need to know what they are doing here?
It sure as hell doesn't feel right with these UFOs and UAPs stalking us playing a very strange cat and mouse game.

I want to say that this is being filmed over the sea between Odessa, Kherson and Sevastopol somewhere within a triangular shape if you look on a map? But it's Ukraine right and so it could be anywhere as there's no information with this Twitter video uploaded by Alien Gray. The video of these four UFOs look far out over what looks to me over the sea but I just can't be sure, until we all find out more about it, it's simply over Ukraine.