Was Pharaoh Akenhaten An Alien His Medallion Shows Aliens

Was Pharaoh Akenhaten an Alien because there's a lot of evidence that shows us he might have been. There's a hidden secret doorway in King Tut's tomb.

The Pharaoh Akenhaten is probably one of the most recognised ancient ruler's that ever existed but was he Alen?

You must admit that the Pharaoh Akenhaten really looked bizarre and I don't mean bizarre as in wearing flares or platform shoes! 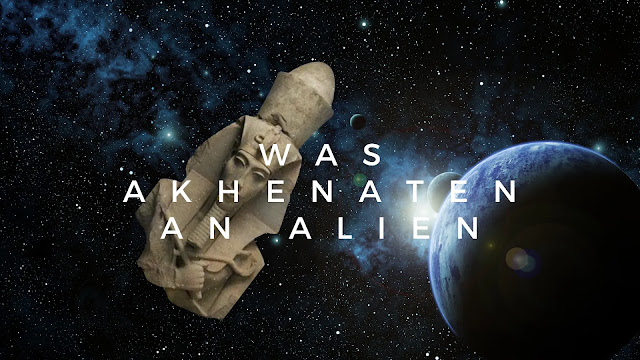 What do we see when we are shown anything that depicts this particular Pharaoh on, it's exactly what "he" was happy for the people to see. A people who he ruled over and he had no qualms about them seeing the real him, the King of Egypt wart's and all it would seem?

It's the exact way that he looked. Possibly if it was any other ancient Egyptian Pharaoh they might have curated a totally different kind of look? Because having extremely pronounced feminine hip's in a traditionally all male masculine position (such as an Egyptian ruler) one might say was not the norm!

Was Pharaoh Akenhaten an Alien because there's a lot of evidence that suggests that he might have been. I've just written a blog post about it. pic.twitter.com/9298JF8EXL

From his elongated skull to his very "rounded" body shape with feminine, almost child bearing hips (see this NBC News). You'd expect a deep fake cover up or at least a scrutinized media on a par with almost changing a historic version of events which is what it would have been, but nope we don't get any of that here. It's actually a breath of fresh air or rather a lesson from history that teaches us to be happy with the gift we got at birth and embrace your difference's because it's this what makes you unique!

And believe me he was unique, in fact some people would say that he's more than unique and it's actually proof positive that he was an Extraterrestrial...

From the elongated head which is without doubt what he had because of the numerous depictions showing us the elongated skull. His pronounced chin and nose, overall you'd think it's an over exagerate depiction bordering on a caricature of himself?

There's a medallion that he was supposed to have owned which depicts an actual craft or a Flying Saucer type Disk that looks like a flying vehicle? There's also a head of an Alien Grey at the top of the medallion. Some say that this ancient medallion (if it's real) that this is proof there was evidence of Extraterrestrials ruling over ancient Egypt.

All the above questions are absolutely valid because it's gone missing. Even though we have the numerous photo's of this ancient looking medallion said to be Pharaoh Akenhatens, it's nowhere to be found and hence because it's missing, it's a mystery that might never get solved? But, I certainly live in hope, so by extension of that I believe that one day we will know the truth.

Akhenaten was one of ancient Egypt’s most influential and controversial Pharaohs of the Eighteenth dynasty. Father of Tutankhamun and husband to the heretic Queen Nefertiti. Below are some facts about the Pharaoh. According to Egyptian Mythology he descended from the gods who arrived on Earth at the time of Tep Zepi. Even today people still believe that this Pharaoh did in fact come from "The Stars".

He lived and ruled thousands of years ago and lived with what modern day scientists would say he had a genetic disorder which resulted in his shape ie head and body.

He obviously wasn't ashamed of any of the way he looked. Was that because of his origins I wonder?

Was he an Extraterrestrial or was he a hybrid and his supposedly Medallion shows an Alien with a craft or UFO depicted in relief on it.

It suggests that he was proud of the way he ooked and did he even celebrate it as we see in many statues and reliefs in his honour? Was ancient Egypt ruled by Extraterrestrials and Pharaoh Akenhaten just an envoy or champion on their behalf?

Or was he literally just not ashamed of the way he looked?

There's a lot of people who have put a ton of research into ancient Aliens and ancient Egyptian Pharaoh Akenhaten, the official Egyptologist would give you the official stance or version but then there's the person who would bring opinions in and examples or literal evidence.

And believe me when we compare the official stance to the educated opinions or best guesses and sometimes truth, we definitely have a fantastic debate on our hands.

Bring in ancient Aliens theory and that's why this is probably one of the best conspiracies that has ever happened. It could literally go on forever and the evidence that could be brought in to back up either side of the argument is absolutely mind blowing, it's stunning.

What do you believe?

Here's a fantastic video for you to watch and make up your own mind about Pharaoh Akhenaten.

Who's in King Tutankhamen's burial tomb because of the discovery of a hidden secret doorway which still hasn't been opened up, check the video here for more: