UFO Mothership Flies Into An Area And Releases An Orange Orb

The orange glow on this Mothership is so vivid and it releases 2 smaller UFO Orbs making it a Mothership. It looks like a genuine UFO sighting to me.

This is one of the most extraordinary UFO videos that purportedly shows what looks to me, like a craft.

It's an orange type of globe but located at the front (from the cameras perspective) two pincer or doors for want of another word open up. 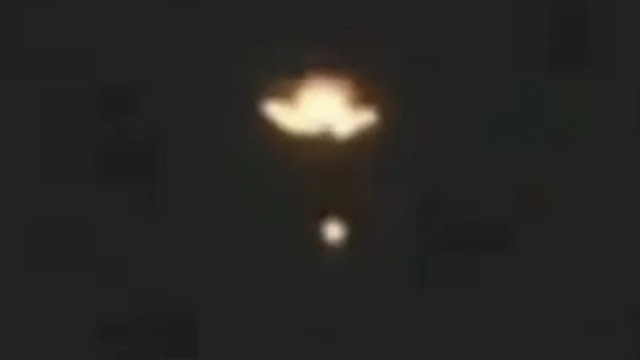 This is technically a Mothership because it's released a couple of UFO Orbs. We can just see it release another UFO Orb just after the original one it releases first.

Just as the "doors" open about a second later a glinting light moves out of the craft and follows a descending movement away from it's "Mothership" and just as it moved away, it looks like another one seems to be ejected from the craft as well?

All of this makes this an absolutely unique UFO with nothing coming close to this very eventful UFO event. There's a lot of UFO sighting's happening around the world and some are obviously hoaxed or exaggerated using slowed down camera frames to highlight specific moments in the video.

There's been a plethora of orange glowing UFO Orbs and craft's seen filmed all over the world. Looking up these types of UFOs is so easy and each has it's own distinct shape. I've personally written quite a few post's about orange glowing UFO Orbs and craft's in fact check out this huge formation of them, it's a truly amazing sight. Here's an large UFO craft post that I wrote about an Alien encounter and a craft.

But this one's pretty much the opposite to that, the part's that would be highlighted in an exaggerated way aren't which tells me that the list of possible answers is closing down and in a good way.

Hoaxers want us to look at specific part's of a UFO video, they exagerate and push a single focused narrative. That's the whole point of them trying to turn people against Ufology. By poking fun at Ufology on a whole with exceptionally stupid and obviously fake UFO sighting's it definitely brings ridicule with it. Also it makes Ufology the laughing stock in anyone's circles.

That's part of the hidden agenda in groups working against Ufology. People faking the most ridiculous looking UFO sighting's and they will use the most obvious and crappy graphics.

To them I suppose it's throwing mud on an already muddied UFO genre? It's a real shame as well because it's humanities right to know so whoever is faking UFOs and the video's is actually working against their God given rights!

Here's the extraordinary video which defies all rational thinking and any kind of logic, that's why I think it's a truly Extraordinary event happening before our very eye's:

There's no date or place except for it happened over the US.