Here's the extraordinary moment when a UFO was filmed over Camp Pendleton Military Base in the USA. It's got 3 red lights flashing and it flew upward.

This is a great video sent into myself through my Instagram channel @ufosightingsfootage and it was filmed by a military family on camp while they where camping on base.

It was described by the eye witness as an invisible craft with 3 flashing red lights. 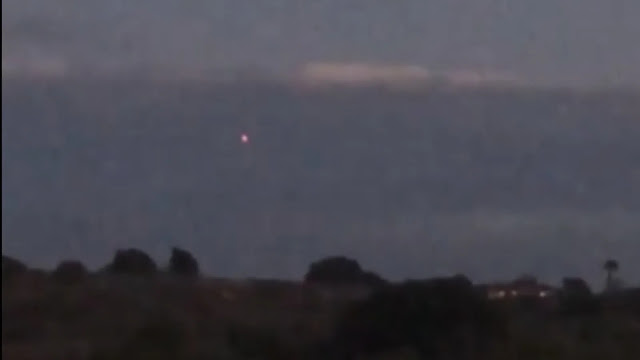 The witness said it just flew off as soon as he stopped filming this UFO.

If anyone has any information on this particular UFO sighting ie if you've seen something similar to this near Camp Pendleton or anywhere else for that matter as it could be anywhere - even now?

The craft only had 3 red lights flashing in a sequence and the witness is adamant that there was a craft there which later took off because there was Jet's in the area. It's hard to understand or grasp this specific situation but even I know that anything flying over a milotary base in the US isn't allowed!

Alright so pretty much my dad is in the military and we went camping on base on Camp Pendleton California, do we went there and it was evening time and I saw these 3 red flashing lights with an invisible object in the middle, also jets were surrounding the area, so then after I stopped filming the red lights quickly like teleported away.

The witness was filming this UFO event and suddenly had to stop filming and when the witness did so, that's when the craft flew off upwards and away. It was described as been in the middle of these flashing red light's but that it's invisible. I kind of get what this person is trying to say because by it's very nature we just cannot see an invisible object.

Maybe it was a kind of shimmering mirage type of UFO? The light's must have been attached to something that just can't be seen. So while I understand what this person is trying to describe, it's still very hard to put it across because like I said, invisible is invisible and therefore having a sense that there was a craft in the middle, it's hard to describe "nothing." We can only say "maybe" that it was there but as it stand's, it was just 3 red light's flashing sequentially flashing and even that in itself if strange because this is the military Camp Pendleton in California, USA. It shouldn't have even been there, but it got there without been detected somehow under the radar so-to-speak.

There shouldn't be anything there but yet there clearly is something there, we can't see it, we can't even see what's flashing the red lights but yet these are there as well? So, it's a very strange anomaly and what's more is that it's not attracted any attention whatsoever which is slightly unnerving.

Here's the extraordinary video which was sent to me this morning at 9 am: