An underground city was discovered when a guy in Turkey decided to take a wall down in his basement. Ancient city of Derinkuyu was discovered in 1963.

If this was myself that decided to take down a basement wall and found an ancient underground city, I reckon that I'd be changing my LinkedIn profile profession to Explorer.

Technically this guy must be the official owner of this newly discovered ancient historic time capsule? It's definitely got to be at least a very good claim to it? 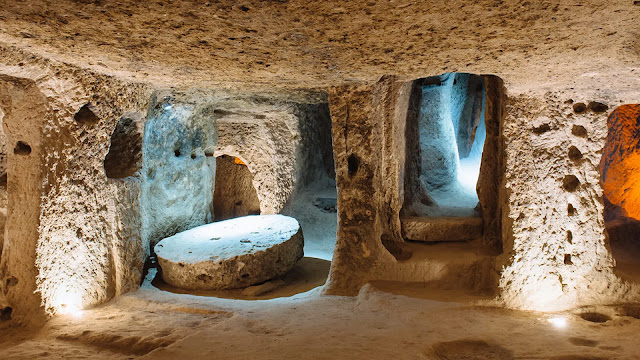 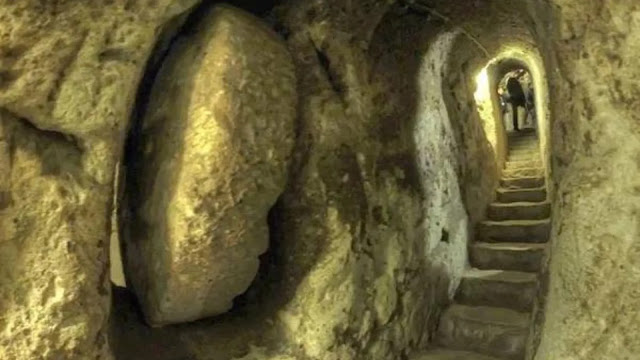 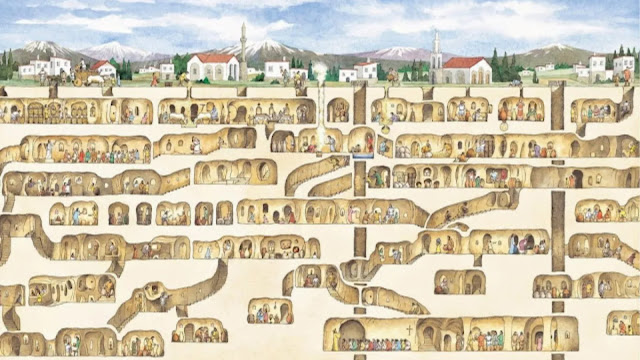 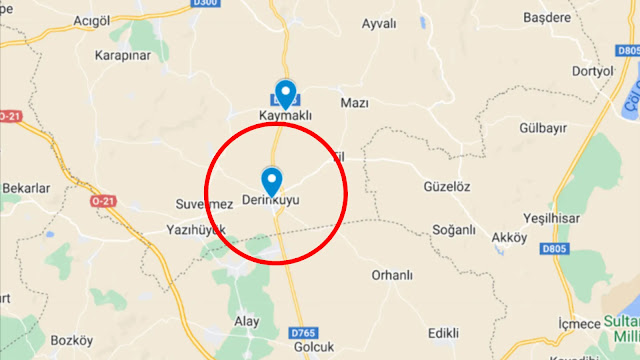 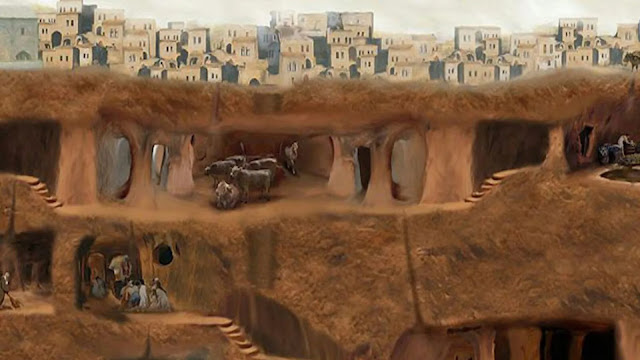 The fact that this is an ancient hideout or "hidden city" could be used for the hiding of people from an outside threat such as an Extraterrestrial entity threat?

It's only been suggested that it was a hideout for people who were religiously persecuted although that does sound like a plausible explanation. But as with anything, just because it's suggested or implied doesn't necessarily mean that it's the only answer. And also apparently the tunnels was only abandoned in 1923... But have been covered up ever since. There's a million and one explanations for every question!

The local authorities would almost certainly be making a claim to this? There's a charge of £5 at the entrance so someone owns this place. I'm looking up different parts to this story because it is a huge story, in fact it incorporates a lot of history which as you'll appreciate is long.

Derinkuyu is a carved city that was carved and chiselled out of the stone entirely into the underground stone underneath Cappadocia.

In 1963, a man in the Nevşehir, Province of Turkey, in an area known as Cappadocia, was redoing his house and discovered an entire city in his basement. Can you imagine what it would be like to find a hidden city behind a wall in your basement?

I've read that the underground city of Derinkuyu was built as a refuge from invading Aliens. It's going to be passed by the time it was carved because it's volcanic rock. There's many reason's as to why Derinkuyu was created and ancient Aliens was just one or just another in a long list of explanations for this place to exist.

There's always a bit of Indiana Jones to everyone no matter whom they are? People are drawn to the idea of discovering something that nobody has seen for thousands of years. Although he (the initial guy that found it) probably didn't know it (the date of the underground city) but there's still the wonder and amazement of a seemingly never ending tunnel and corridors, shafts, rooms and hallways, stables, bakeries?

There has to be a sense of something exciting is hiding or even lurking deep inside? Like Ghost hunters and Paranormal researchers the world over will probably also attest to, the excitement of the unknown is irresistible?

Derinkuyu is absolutely huge, it's massive and extremely spacious in terms of it's living quarters and that is by any underground living standards! It's simply put "unlikely to be surpassed ever" even though a lot of underground cities were created, this one might never be surpassed? So was Aliens actually involved in either making this i.e. carving and chiselling the stone away or was they involved in bringing the people together to create this place?

Or should I say it's unlikely that we will ever uncover another underground city as large as this one, but never say never.

Looking up underground city of Derinkuyu you'll see lot's of round wheel like boulders at the side of entranceways which actually gives away the clue as to what these "stone wheels" are for? The entrances can be sealed at locations so as to evade invaders and lock themselves in at night time if they so choose? It's a fascinating look at the everyday life of the people who called this underground labyrinth home.

It is believed that the underground cities of Cappadocia were initially built during the eighth and seventh centuries BCE by the Phrygians, who carved their living spaces into the volcanic rock.

There's photo's of Derinkuyu which defies all logic and explanation which probably doesn't sit right with archaeologists and researchers alike? The seemingly endless shafts leading to who knows where? The vaulted ceilings which wouldn't look out of place in the Pyramids of Giza.

Then there's the whole reason for why it was blocked up and shut up for centuries?

That's arguably the most important question of all about this entire saga? And it is a saga because were constantly finding out new thing's about this because it's just so large of an area to research and go through it with a fine toothcomb. The ancient underground city of Derinkuyu is in fact entirely made out of stone from floor to ceiling there's no let up. It's everywhere and the watering holes and ventilation shafts are all made from stone chipped away which took a long time.

The elaborate subterranean network included discrete entrances, ventilation shafts, wells, and connecting passageways. It was one of dozens of underground cities carved from the rock in Cappadocia thousands of years ago. Hidden for centuries, Derinkuyu's underground city is the deepest. The Derinkuyu underground city has 11 levels, extending to a depth of approximately 60 meters (200 ft), it is large enough to have sheltered as many as 20,000.

It has wine cellars, stables for livestock, and even what appears to be chapels. The openings to each level are guarded by a huge circular rock door that can be shut by a single person from the inside to keep people out. The opening in the center acts as a peep hole. It also has an air ventilation and plumbing system. The largest vent also acts as a well.

See, everything about this underground city is extensive, it's vast, it's impeccable and constructed marvellously from an immovable rock floor which is deliberate and calculated. Religious persecution might play a huge factor in why the architects went to such lengths to create a safe environment from the persecutors and after all, we probably might not know the people personally but we can certainly understand why they went to such lengths to keep out certain people.

We only need to look, around the world now to see some brutal regimes and with the knowledge of ancient dictators no wonder people literally built cities underground and literally shut the door!

This research ive done for this is eye opening and mind blowing in parts. I really don't know what it would be like to live in such a place? To me it seems depressing and dark, very dank plus soul destroying. So, imagine what the alternative must have been like for people (up to 20,000 people) to have gone to such lengths to avoid at all costs? Anyone wanting to learn more about this spectacular place I encourage you to check out as much as you can.

How long did it really take to carve out of the stone?

If you've got any thoughts on this whatsoever please share it with us in the comments section below, cheers. Also please share this post if you can, thanks.