Fleet Of UFOs Filmed Flying In All Direction's Bulgaria 2021

Filmed over Bulgaria in 2021 this is a fantastic video showing a fleet of UFOs. These are definitely real UFOs moving independently of each other.

Large fleet of UFOs was filmed in the sky flying in and out of the cloud's in this bizarre video footage.

It's one of the best UFO fleets (flotilla of UFOs) and it's definitely not balloons because they'd be flying in the same direction on the wind. 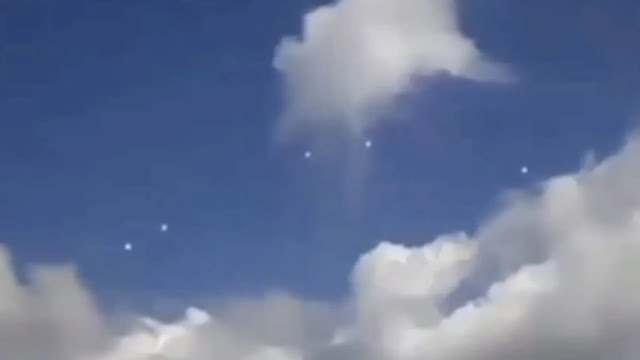 Fleet of UFOs filmed in the cloud's moving independently from each over Bulgaria in 2021. They're moving in all directions which suggests it's not the wind moving these. Plus they seem to be flashing.

It makes complete sense to me taking into account that the wind generally blows in one direction and the cloud's would have been moving erratic or at least at the same speed as the UFOs?

Flotillas of UFOs (real looking UFOs) are few and far between. There's fleets of Chinese lanterns, hot air balloons and even general balloons being released but for the UFOs to look real they've got to be moving at different speeds, flying generally together but definitely acting independently from each other.

That's why this is such a realistic UFO sighting. We see individual UFO Orbs flying at different speeds with some turning and guy's that's just not going to happen in normal circumstances. If the wind was blowing erratically the cloud's would definitely be showing us that. But the cloud's are together, they're not been blown about so we can rule out that.

These UFOs are powering themselves and they're turning under their own steam. I don't know how but after ruling out the wind based on the cloud's staying together I've got to go with the evidence. While I'm not a "wind engineer" lol c'mon I had to get that in. And yes it does exist see here.

I can definitely see that we aren't looking at anything naturally occurring. Therefore I've got to go with this being a real UFO fleet.

Here's the extraordinary video which was uploaded to Instagram by Ovni_Avistamientos: