At Least 4 UFOs Flying Around The ISS On Camera

A UFO happens to fly past the ISS which was caught on a camera filmed by an unknown person. Then another 3 UFOs turned up flashing their lights.

These UFOs are spectacular because it's the space station and NASA still hasn't even referred to these let alone admit to UFOs full stop.

The first UFO comes upwards to the space station and as we can see, it's a large craft. 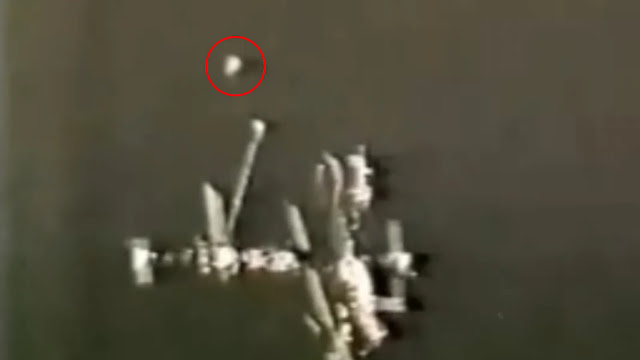 Filmed by an unknown astronaut near the International Space Station, I've looked this up to no avail but it's definitely an early ISS video. Because it's an unknown NASA video, I'd like if we could at least narrow it down to a mission program or year? I've scanned Google through Len's but it's not bringing up this one?

It's not the best UFO video I must admit which suggests that it's an early NASA video?

Who's filming this UFO sighting?

Why hasn't NASA even referred to this at any point?

I counted at least 4 UFOs in the video.

The other UFOs appear after this first one flashing on and off very fast, to the right of the first white UFO.

If it makes sense to you, please share your thoughts with us in the comments section below. I'd love to hear any rationality as to why you think NASA should be keeping all the many UFO sighting's a secret?

After the first one to go past the ISS, another couple of UFOs actually turned up as well. These started to flash a light or it was themselves that was flashing? It's a truly unique UFO sighting because firstly I don't know who's filming this as it's away from the station itself and we can't see who's behind the scenes. Then there's the possibility of this being a resupply capsule which does make sense but not conclusive evidence.

If you know anything else about this specific NASA video I'd like to hear from you in the comments. Some people are more knowledgeable than other's on different subjects and so they can provide more of an in-depth knowledge than others. The comments section below is another extension of this post, it goes without saying that the comments section is yours and you can get involved.

Here's the bizarre UFO sighting's that was filmed at the ISS by someone related to NASA on some level: