Flying Disk Filmed From Inside A Car Hovering During A Storm

The eye witness was driving along in his car when a bright flash occurred when he was filming a large round flying disk is there. Is it a reflection?

I'm going to ask this question straight off the bat, is this a reflection in the window of the car?

Guy's I have watched this video a few times now and even though at the beginning of the video it's a clear view of a white Disk with marking's on it's underside it starts to become hard to see. 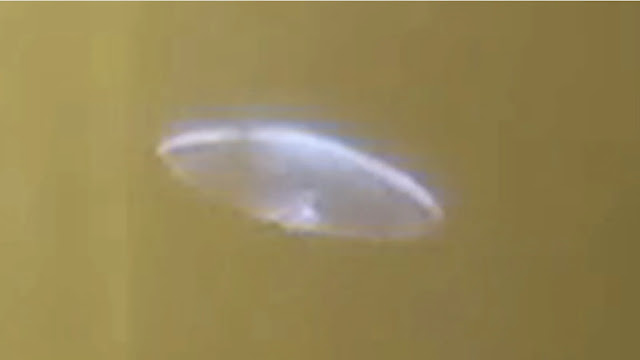 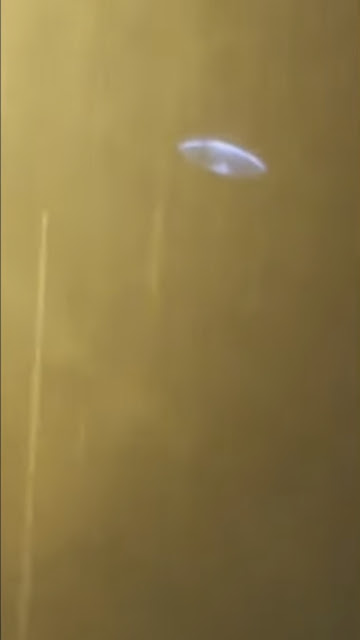 Your thoughts on this video are welcome.

I was leaning towards it been a reflection until it get's three quarters the way through the video.

Until then I was definitely starting to ask myself why is it struggling to get good contrast and why is it blurring? Because if it's a reflection then that couldn't happen. It happened on 10th May 2022.

The disk would be a certain distance between the car window and where it is, this blurring and eventual clear picture of the Disk just couldn't happen. The reflection should stay constant if the Disk is placed somewhere within the car say on the dashboard for instance etc? That for me, explains that what we are seeing isn't a reflection.

So it can't be a reflection, can it?

I totally understand that it might not be as clear cut for some people because we're all different thinkers and so what's understandable for me and the next guy might not be for another? But that's what makes this world go round, the debate! The conversation and the looking at one thing but being able to come up with multiple answers, multiple explanations for one question so-to-speak.

This is why I am always asking you guy's for your thoughts and opinions because I am well aware that even clear cut answers can and often do vary. You guys always surprise me, and more often than I'd like to admit that when I'm wrong or seeing something upside down, you guy's explain it the right way up.

Scott Waring explains in the beginning that this was uploaded to MUFON and filmed over Cairo Egypt. The witness was driving along and a big flash occurred and this Disk is there. Is it white or glowing white? It's been reported to MUFON and hopefully it will be looked into by someone at MUFON HQ on a fat wage? I live in hope that one day it will be free to research instead of paying a fee of $60 a year! Wow.

This is a spectacular UFO sighting and the eye witness who we can hear in the car talking asking what is it then he state's "that is a UFO. He (Scott Waring narrator) mentioned that it can't be seen with the eye but only when it was been filmed? That's not uncommon actually and has happened on numerous occasions involving many different people experiencing many different types of UFO sighting's.

Even other UFO buff's have featured this like Latest UFO sightings.

Is this a bio version of the camera blocking technology? What I mean is if cameras can be blocked from filming at specific places with either signals or some other frequency jamming etc then why not human eyes because we're all essentially energy and energy can be remotely increased or decreased?

Technology, anything and everything is possible because science tells us this.

It's definitely something because we've had decade's worth of examples of UFOs blocking being seen, but being able to film them. Just like the UAP videos where the pilot's couldn't see the UFOs until they turned in the Flir cameras (Forward Looking Infrared cameras) and only then could these UAPs be seen.

So there is evidence (official evidence) of this actually existing. It's not just one man's belief or soundbyte! I've got a few different pieces of research to discuss about this in other post's that I've written so make sure that you check out my website and search for UAPs. In fact, there's a lot of people who have been able to see UFOs but not film them, it's almost as if it's a reality switch? To be filmed or not to be filmed, in whichever part of the light spectrum you like, or not?

That's why the UAP videos are in black and white, it's been filmed in Infrared part of the light spectrum. Strange stuff.

Firstly, this is like nothing else that I've ever seen before and I've been researching UFO sighting's for nearly two decades now. I'm nowhere near as good as I'd like to be, but I'm definitely getting better. Just keeping Ufology in the public eye is a fantastic endeavour because it's been ignored by mainstream media even if they've only gotten on board since the US Government has released numerous UAP videos.

Two decades worth of UFO research isn't actually that long but it's certainly long enough that you'd think I'd be able to give you a run down about what this is? But, just like other UFO researcher's, I'm asking you?

Thing's always happen for a reason which means that there's an answer to this, let's see if we can get to it?

The witness description was that it's a Disk only visible to camera not visible to naked eye.

The video starts off with a panned out view of the camera inside of the car filming forward out of the windshield. It only becomes apparent where it is when we can start to make it out in the top right corner.

Here's the extraordinary video which was uploaded to YouTube by Scott Waring channel: