Mexican Government Officially Recognises The Existence Of UFOs And UAPs

Here's the extraordinary evidence that shows UAPs are real and the Mexican Government has officially acknowledge it finally by releasing these papers.

This is another monumental moment in history and especially within the Ufology genre itself.

The Mexican Government has officially released the following documents which I've had translated into the only language which I know "English." 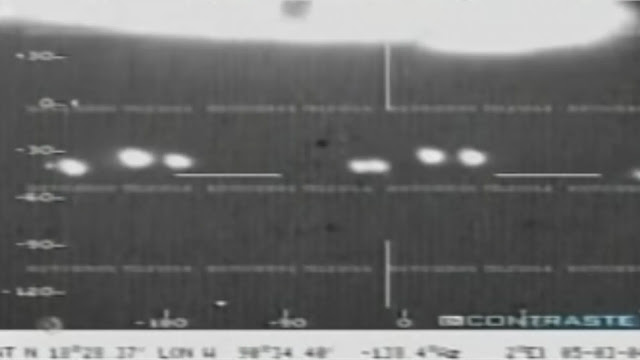 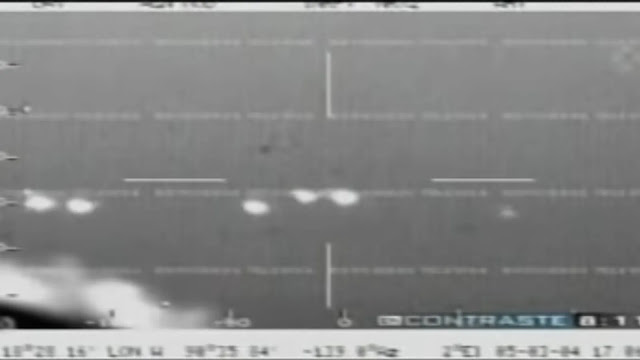 The images above are from the Mexican Air Force jet's chasing multiple UAPs.

It's directly translated from the documents into Google Translate.

It's a revealing process for it to start revealing itself as it's been translated as I'm reading it, it's epic. The Mexican Government acknowledgement of UAPs is great, I'll link to the Mexican Air Force jet's chasing UAPs here.

I've or should I say we've all been waiting years for this to happen that a Government or any Government to acknowledge the existence of UFOs. I know that we've had thee US Government release all kinds of exceptional UAP disclosure (which is awesome) but now other Government's are stepping up.

It's like I said, a monumental moment because it's starting to look like it's one agency, Government body, Senate, Congress, Military arm like the Air Force are all stepping up around the world! I've shared the Mexican Air Force pilot's encounters, the US Navy Jet's all coming into contact with the UAPs and giving chase.

It feels like it's one after the other and they're all throwing caution, protocol, established policies and procedures out the window! And about time too. I'm really not concerned at this point about what changed high up in the structure of authority and I'm certainly not arguing with the UAP disclosure, UAP videos, the official stances have all changed around the world. I'm certainly not arguing with the changes.

Here, below is the image of which I've translated into English which you'll find is directly underneath this image. 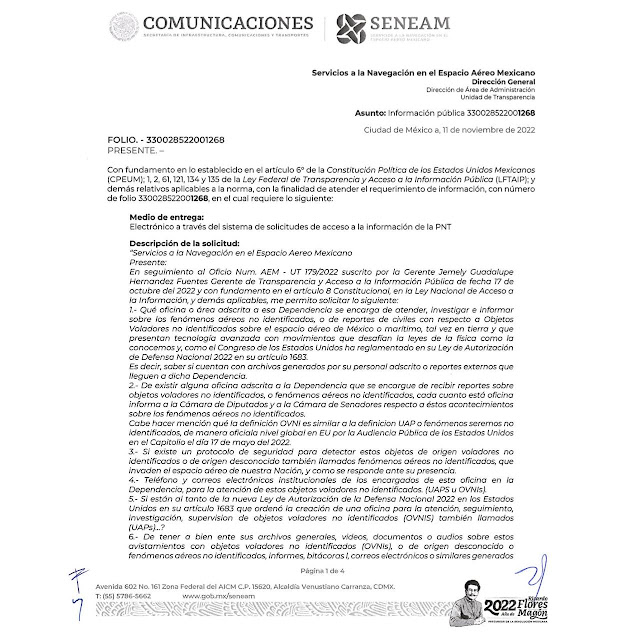 Here's the Mexican Government officially stepping up in writing:

Based on the provisions of Article 6 of the Political Constitution of the United Mexican States (CPEUM); 1, 2, 61, 121, 134 and 135 of the Federal Law on Transparency and Access to Public Information (LFTAIP); and other related matters applicable to the standard, in order to meet the information requirement, with folio number 330028522001268, which requires the following:

Electronic through the system of requests for access to information of the PNT.

Description of the request: "Navigation Services in the Mexican Air Space

October 2022 and based on article 8 of the Constitution, in the National Law of Access to the Information, and other applicable, I allow myself to request the following:

1- Which office or area attached to that Unit is responsible for attending, investigating and reporting on unidentified aerial phenomena, or civilian reports regarding Objects Unidentified flyers over Mexican or maritime airspace, perhaps on land and who they present advanced technology with movements that defy the laws of physics as we know it and, as the United States Congress has regulated in its Authorization Act of National Defense 2022 in its article 1683. That is, to know if they have files generated by their seconded personnel or external reports that reach said Unit.

It is worth mentioning that the UFO definition is similar to the UAP definition or phenomena we will be unidentified, officially globally in the US by the United States Public Hearing at the Capitol on May 17, 2022.

3- If there is a security protocol to detect these objects of unidentified flying origin or of unknown origin, also called unidentified aerial phenomena, which invade the airspace of our Nation, and how to respond to their presence.

4- Telephone and institutional emails of those in charge of this office in the Unit, for the attention of these unidentified flying objects. (UAPS or UFOs)

5- If you are aware of the new National Defense Authorization Law 2022 in the United States in its article 1683 that ordered the creation of an office for the attention, monitoring, investigation, supervision of unidentified flying objects (UFOs) as well called (UAPS)...?

6. To have available your general files, videos, documents or audios about these sightings with unidentified flying objects (UFOs) or of unknown origin or unidentified aerial phenomena, reports, logs I, emails or similar generated.

By its seconded or foreign personnel who have reported to the Unit, all of the above regarding sightings or events regarding unidentified flying objects (UFOs) requested a copy of them to this email address to hear and receive notifications. [-] 7.- If the Unit has any comments, emails, official reports on the subject of unidentified flying objects (UFOs) from 1990 to 2022, I request that you share a copy of the document or documents in this regard. . I thank you in advance for your attention, hoping for a response to my request shortly. [J." (SIC)

Firstly, you are informed that in accordance with the "Agreement by which the Decentralized Body dependent on the Ministry of Communications and Transportation called Services to Navigation in the Mexican Air Space (SENEAM) is created", published in the Official Gazette of the Federation (DOF) on October 3, 1978, in its second agreement, it states that SENEAM is responsible for providing Air Navigation and Air Traffic Control Services. Aeronautical Meteorology, Air Navigation Assistance Systems, Aeronautical Telecommunications, Flight Dispatch and Control Services and others that are necessary in the Mexican Republic, in order to guarantee the safe and efficient transportation of people and goods in Mexican airspace. , as well as provide operational message services. administrative and of any kind required by companies, agencies and individuals, in their national or international air transport activities, among others.

In this context, based on articles 11 section 1, 61 sections II, IV and V, 133 and 134 of the Federal Law on Transparency and Access to Public Information, as well as the Second section III and Twenty of the Guidelines that establish the internal procedures for attention to requests for access to public information, approved by the National Institute of Transparency, Access to Information and Protection of Personal Data, published in the Official Gazette of the Federation, on February 12, 2016; It is reported that your request was forwarded to the Directorate of the Aeronautical Services Area, which responded to your request, in the following terms:

In this regard, said administrative unit reported the following:

Regarding question number 1 and 2, it is kindly reported that this Decentralized body does not have an office or attached area that is in charge of attending, investigating and reporting on unidentified aerial phenomena or reports of civilians regarding Objects Unidentified flyers over the airspace of Mexico, however, the following is reported:

Derived from the attributions of this Decentralized Organ dependent on the Secretary of Communications and Transportation, called Navigation Services in the Mexican Air Space (SENEAM). Published in the Official Gazette of the Federation on October 3, 1978 and its amendments, which indicates the powers of this Decentralized, among which are:

Air Navigation Assistance Systems, Aeronautical Telecommunications, Dispatch and Control Services of Flights and others that are necessary in the Mexican Republic, in order to guarantee the safe and efficient flow of people and goods into Mexican airspace.

II.-Provide the operational, administrative and any other message services required by companies, agencies or individuals, in their national or international air transport activities.

III.-Operate and keep updated the different systems that integrate the services in charge of the body described in the preceding sections and II and directly make the installations corresponding to extensions of these systems that are approved by the Body in its investment program.

Here's the extraordinary UAP video which set off a chain of events in the Mexican Air Force and the Mexican Government:

If you've got any response to this or any thoughts about this, please share it with us in the comments section below, cheers. Also please share this post, thanks.