A video of a flying saucer but one which the US Government has been involved in developing has been fully designed and made plus it flies fully.

This is a fantastic video which shows us that we as humans should be a lot further in the advanced aerial technology race.

There's no way that we're still stumbling over a rotary blade craft, a battery pack and a games controller for a hand held device. 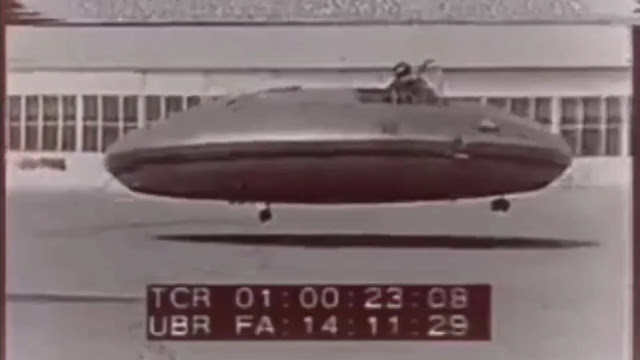 Seriously, if this is 72 year's old technology then what is out there now that has evolved from this silver metallic Flying Disk.

I'm not buying it and neither should you. Why shouldn't we be buying it, because all these people who are sharing videos of themselves with "off the shelf" product's cobbled together with string, bluetac and sellotape. I'm just not buying it that this is the pinnacle of human ingenuity.

We're constantly upgrading our own technology one way or the other with either the same product but with better software or better overall performance, stability improvements etc with extra fluffy dice to boot.

There's no information with this video whatsoever, but I'm going to try to find out what I can about it and I'll be updating this post. I wanted to share this video with you first.

Basically there should be a long lineage of Flying Disks where we can see a timeline of craft's but apparently it's not the case? I don't buy it one bit and probably the far more advanced aerial vehicle's have been branded top secret with either the craft in the video or the direct descendant of this Disk.

Combined efforts to advance the space travel industry by creating manned craft's and unmanned aerial vehicle's has definitely been in motion since anyone can remember. It's been heavily funded and the spin offs are almost certainly had a say in a lot of UFO sighting's.

Plus, side projects have undoubtedly given rise to a whole host of different types of UFOs or craft's which people have mistakenly filmed as UFOs.

Developed by Avro Aircraft, Ltd. of Canada, it was initially supported by the US Air Force as an advanced fighter aircraft, and after it became clear it would never meet its performance goals, was funded by the US Army, which saw it as a kind of flying Jeep, replacing helicopters for operations in rough terrain.

The design was very odd. Lift for vertical takeoff and landing was provided by a central “turbo-rotor” with fan blades which created downward thrust. The rotor was powered by three jet engines mounted in the fuselage, but they were not mechanically coupled to the rotor like the engines in a helicopter. Instead, their jet blast was directed at turbine blades attached to the rotor, which caused it to spin.

Check out the eye opening post about everything that this got up to and all the advanced innovations that this was involved in bringing to the forefront of the aeronautics industry.

Like I mentioned, it would not surprise me that this was the beginning of the UFO sighting's that subsequently started to occur not long after these where introduced.

Government agencies have been creating many types of drones, TR3Bs, Triangle shaped craft's and there's a long list of many different patents in the public eye that almost seem like it can't be real, yet it is.

Here's the extraordinary video which shows us that the US Government has had working models for Flying Saucer type aerial vehicle's:

Just what else has the US Government been working on, how about these UFO Orbs filmed by US Navy pilot's? How do we know that they wasn't behind it from the beginning?