This is one of the most important UFO sighting's that's probably ever been independently filmed outside of NASA. A guy in Bristol, UK filmed a UFO.

An enormous alien structure was, they claim seen moving in the direction of Jupiter’s moon Europa which, according to some, resembles an ‘interstellar mothership’ or ‘an intergalactic cruiser’.

To be quite clear guy's, Europa Jupiter's Moon is and has been under surveillance for a while now. It's considered as one there best places to find life outside of Earth. 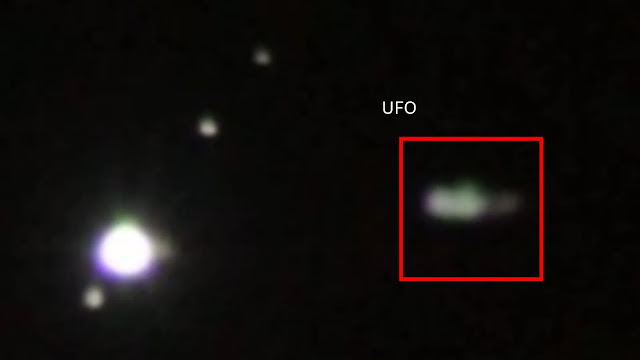 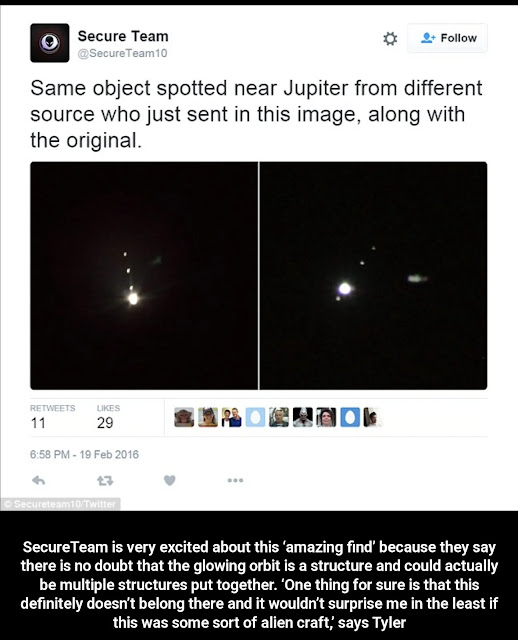 There's a large Mothership UFO approaching Jupiters Moon Europa and it's caught on camera from the Earth by Mr Read using a Cannon 650D 7D-300mm telescopic lens which was only on a tripod, the camera's today are epic!

The camera's in this day and age are absolutely mind blowing and can zoom into Europa which is unimaginably far away.

It's (Europa" an icy cold Moon with an ocean of liquid underneath the ice which covers it. This is the Moon which everyone will remember the animations of the heated drill going through the sheet of ice to then release a submarine.

Everytime life on another planet is referred to in pretty much any TV show they usually referred to the animations of Europa. Maybe it's just the fact that the animation is already created and explained perfectly what looking for evidence of Extraterrestrial life in space is? Or maybe it's because it is thee most likely place to find Alien life because they (NASA and sub-contractors) know that there is life there? 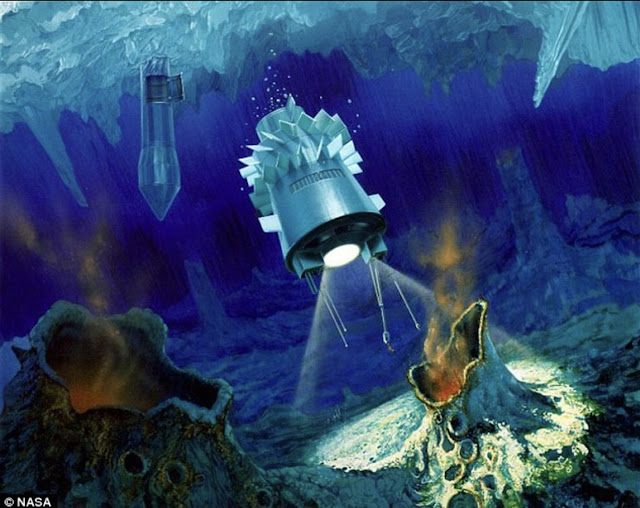 Mini submarine that NASA animation shows would be looking for evidence of Extraterrestrial life in Europa's icy ocean.

Shines like metal and has straight edges . If not a long lost man made satellite it must be some sort of space ship.

We are talking about a NASA that likes to turn off the live feed with UFOs in the screen. That's why it's hard to accept anything from NASA because of the hundreds of times UFOs have been censored by them. Even when they turn the live feed off, they do not investigate the anomaly in the live feed.

They do not refer to it at all.

That's how we know that something's up. UFO turns up, the screen goes off, it comes back on and they don't mention the UFO.

There has been a lot of scientific talk about alien life likely existing in the vast oceans that currently exists under its icy surface.’

The video was sent to SecureTeam from Louis Read, a Martian researcher from the city of Bristol in the UK, reports Mirror Online.

The image shows Jupiter glowing on the left and a strange anomaly shining brightly to the right of it, which they suggest is approaching Europa.

That's exactly how it goes and that's why we know that they cover up the UFO sighting's as if it never happened, but the thing is we all saw the UFO turn up or come into view. It's such a shame that it happened that way because if they used their heads they could have prepped the planet for the UAP disclosure of the UFOs or UAPs which had been filmed on numerous occasions around the Nimitz and Theodore Roosevelt.

Many commentators have questioned if the reflecting light is the planet Saturn or a cluster of Jupiter’s moons. Others suggest it might be Juno, a NASA spacecraft released in August 2011 to help scientist's learn more about Jupiter. (This is from 23rd February 2016).

But, it never happened that way and some say this is why NASA was left out from the UAP disclosure. NASA wasn't part of telling the world about the UAPs (Unidentified Aerial Phenomena) which you'd think it was definitely their responsibility to do? Technically it's NASA's department because these UAPs must have been one of the many UFOs caught on the ISS live feed? There's been hundreds of UFOs filmed flying past the ISS.

But it's all speculation and as with anything there's always something new, something unknown and I could be totally wrong? Until the evidence is put forward by someone then it is what it is.

Here's the extraordinary video which was uploaded to YouTube by SecureTeam10 channel: