Here it is, here's the extraordinary video evidence which is undeniable and the most extraordinary NASA ISS UFO exposé secret UFO activity that back's up multiple theories.

I've been writing about UFOs and NASA's ISS live feed cameras picking up "unknown craft's" for a long time.

They are always flying past the ISS and it's been going on for sone time now. 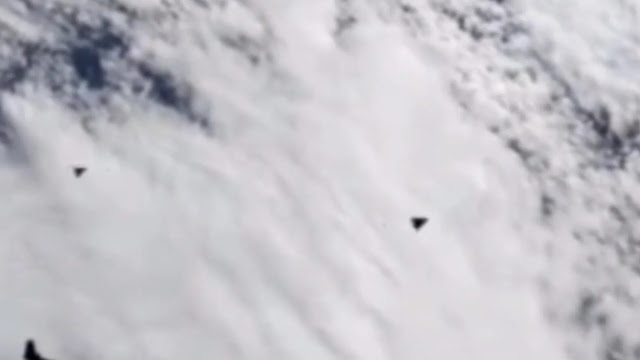 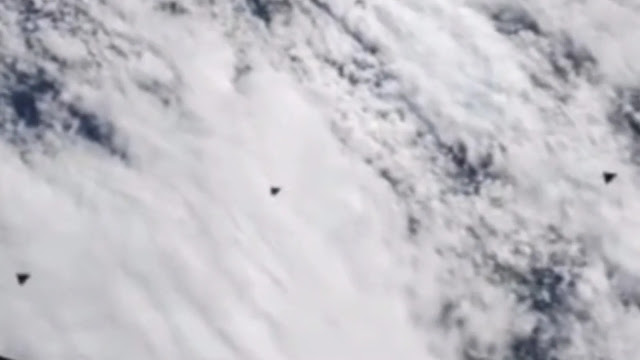 This is a special kind of UFO sighting, because it's one of those that look very real.

The three black triangular shaped craft's are traveling at speed past the ISS camera's, there's no messing around with their speed as these are really shifting, they're going somewhere in a hurry! Has NASA acknowledgd these unknown objects because they have a very publicly known about tracking system of object's around the ISS (International Space Station).

More than 27,000 pieces of orbital debris, or “space junk,” are tracked by the Department of Defense’s global Space Surveillance Network (SSN) sensors. Much more debris.

Most people are aware about a tracking app of potentially hazardous object's which could strike or threaten the space station. Because of this, NASA's invested in tracking anything that is manmade or space debris that is a nearth Earth object.

There's a paragraph in the post that I've just linked to above which states that NASA takes it very seriously the threat of a collision with an object. They have a long standing set of guidelines on how to deal with any individual threat of a potential collision. The post say's that there's approximately 23 thousand piece's of debris orbiting the Earth larger than a softball and they travel up to 17,500 miles per hour! You really need to read the post because it'll give you an idea of what NASA is aware of or it must be aware of!

I believe that they "must" be aware of these. They are tracking a half of a million pieces of debris as small as a marble.

My ideas and opinions are ever evolving regarding the cameras and the UFOs turning up at the ISS. Because of the never ending stream of UFOs or craft's going past the ISS and the ones hovering or appearing out of nowhere, there's always something new to learn. And they really do just appear out of nowhere. There's more and more people willing to leak footage and then there's the eagle eyed viewers spotting the unusual activity.

To think that I'm able to research everything that there is on ufology is a high hope. I think researching what I can pretty much sums it up not just for me but all UFO researcher's? Guy's there's a lot of information out there and I mean a lot. It's alway's being added to continuesly so it'll be forever evolving as will opinions, beliefs and theories.

This pushes me on because I never know what kind of UFO is going to be reported on next and I like that? I'm passionate about bringing people's stories to the world.

Eagle eyed viewers or UFO witnesses should I say, report some very extraordinary UFO sighting's. It's these one's which I believe that the world is interested in and they have a right to know about them, so this is my way to contribute to that.

Even if it's a researched and well informed opinion, that too is also what I'm bringing to the world. A voice for people who have had a UFO experience.

What's out there really?

Where did these black triangle shaped craft's come from and where did they go?

There's a massive increase in UFO sighting's around the world but it seems nothing's been done?

Could anything be done about them anyway?

Did the ISS track these near objects?

Supposedly NASA track's everything that could potentially hit the ISS and because these three UFOs (triangle craft's) are so close, it makes me wonder did they know about them?

Because every new UFO sighting outdoes the last. In terms of a very blatant and obvious, devious way (that's the dictionary meaning of the word blatant) and it's definitely describing the ISS live feed cameras practice to a tee.

There's 3 black triangle shaped UFOs screeching past the camera feed. I get the distinct impression that if someone is paid to monitor the ISS live feed and then cut the feed as and when an anomaly appears, that person missed this because it happens so fast?

Here's a very similar looking video showing UFOs flying at the same speed as the ISS. That was seen by legendary UFO writer Scott Waring.

That's only an opinion but of course like anything "suspicious looking" there's alway's the innocent way to look at it and then there's the suspicious way. It's alway's and ifbest to always start with the benefit of the doubt first because that's the decent thing. So, with this it's a case of are these NASA supply capsule's or satellites

Guy's, I remember this black triple triangle shaped UFO sighting flying past the ISS that I wrote about before, check this out. 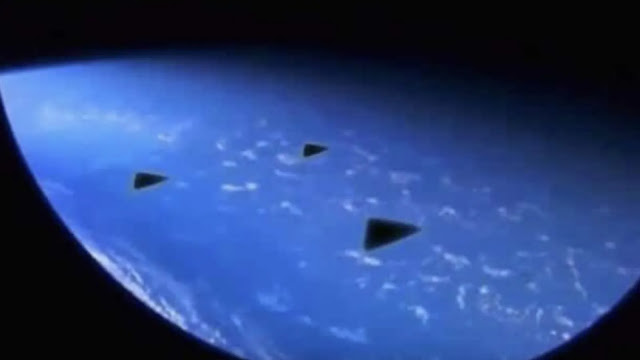 The similarities between the two separate UFO sighting's but both having 3 black triangle shaped UFOs, it's uncanny to say the least.