Here's A Really Bizarre Anomaly Over The Indian Ocean

This is not a UFO sighting but instead it's a Chinese Long March Rocket that came down over Sarawak, Malaysia. It was in the Indian ocean in 2022.

Electric blue "flashing UFO Orb" is a true strange UFO anomaly without any shadow of a doubt.

Sometimes a meteorite shower is either orange, white glowing some form of a natural burning up in the Earth's atmosphere. 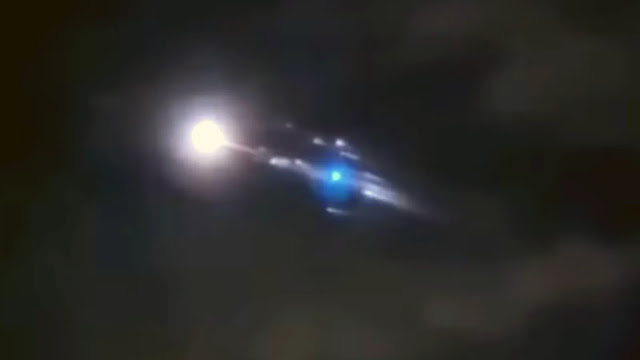 It's what I first thought about this I'll be honest with you, I was so angry with myself for getting it so spectacularly wrong apparently. I don't think it's been confirmed as what they're saying it is? But anyway, I've turned it into a positive learning curve for myself and I want to share this whole experience with you.

Is this a UFO or Chinese rocket.

This is a flashing blue light that's either on the UFO or it actually is "the UFO" but not everything is what it appears to be? This was my thinking as I was writing this post initially. I was a few days into researching this when I discovered a lot of new information on this supposed UFO sighting.

Initially I was writing all the following; In fact look closely there's 2 of what looks like flashing blue light's, there's the main one and another one just above it doing the exact same flashing. I continued writing...

The glowing blue (or flashing) UFO Orb looks like it's tried and succeeded in sneaking into Earth's atmosphere? It's just behind the main front end of the large white spherical meteorite, that's what I thought the white ball of light was. This blue UFO Orb which is what I'm calling it an Orb, it's nestled right in between the main bulk of the mid front section where the debris cluster is and the white debris is at the rear. It's nothing like anything else that I've ever seen before in my life this far! When it comes to a Meteorite shower or a single meteorite skimming through the Earth's atmosphere it doesn't look like this blue light.

Flashing blue light's inside meteorite shower or a Chinese rocket.

We see the "object" flashing blue which is very unusual as part of the cluster. If it was burning up wouldn't it be a one time thing? I don't think it would heat up, cool down and then heat up again in quick succession a fair few times as well I might add. Because as far as I know guy's it would need some sort of an artificial heat source to heat it up and down constantly! That's what I think it would take for an object to flash like this? The rapid heating and cooling down seems unnatural to me but I could be wrong?

Is this even a UFO sighting or not?

Imagine if you will, if it was an electric cooking stove and you was turning the temperature knob up high and down low and the stove was heating up and cooling down, but rapidly. You'd maybe see a red hot and a darkened stove. My reason for saying this is because where's the energy coming from and then disappearing? The meteorite burns up and fizzles out once on entry. It doesn't rapidly heat up and then fizzle out over and over again and causing a blue light!

And I'm sure that a Meteorite just burns up in the atmosphere, I don't think a Meteorite heats and cools rapidly and shining brightly in a flashing mode.

It looks intelligently controlled to me, which it turned out it was.

But, just because I've never seen anything like this one before, that doesn't necessarily mean that it's never happened before. Because it was definitely luck or "happenstance" shall I say which brought me to this one.

I was doing my early rounds of social media platforms checking out my favourite UFO sightings blog's and keywords etc. Then I came across this video on Instagram and I just thought "wow" this is a different UFO, this is strange and it looks like a unique UFO as well. My thinking then was that this is not naturally occurring on Earth and if it's a meteorite, they do not flash blue!

That was my initial thinking then.

This stands out like a sore thumb. So, based on that thinking, I thought to myself that there could have been other examples of a blue flashing light on a UFO or the actual UFO itself "is" the blue light?

But then I found the correct answer to the anomaly.

I've been looking it up, I searched for "blue flashing light UFO meteorite" and guy's, there's definitely a full search page on blue light UFOs which one of them I've linked to here on the website The Star which states that it's a Chinese Long March Rocket. I've quoted a segment of the post just below.

Before I knew this information I was writing this:

A huge piece of space junk – apparently from the Chinese Long March rocket has crashed down to Earth – with its fiery re-entry spotted by many over Sarawak skies. The 22.5 tonne core stage of the Long March 5B rocket re-entered Earth's atmosphere over the Indian Ocean at approximately 12.45am on Sunday (July 31, 2022), according to US space agency NASA.

I continued before knowing it was a supposed Chinese rocket which actually caught a lot of other UFO researcher's as I'm finding out now. Some have had to change their Twitter post's and blog posts as well. So it's definitely caught out so e other people...

It might actually be a good way for anything else that wants to come to Earth, just sneak right behind a Meteorite which would be a perfect gateway onto the planet Earth! We'd see it and just think "oh, that's a great meteorite, quick let's make a wish."

All the while we're wishing on a UFO.

I'd really like to hear your thoughts and opinions on this one guy's, what do you think about the idea that UFOs could potentially be sneaking into Earth right behind a meteorite? I mean, it makes sense and it's a plausible idea.

There's a lot of UFO sighting's around the world and guy's some look great, some look profound and then there's the ones which are totally different and bizarre because there's elements of intelligence behind the UFO.

Then I found out all the many post's by people who claim that it's a Chinese Long March Rocket burning up in our atmosphere. I've posted this post to show people that even if I've written a full post about what I think is a good UFO or a potential real UFO, if I discover that it's something else more down to Earth, I'll admit that I was wrong and I'll correct the mistake. I can't get it right everytime and I fully embrace this idea.