Atacama desert has seen an ancient Alien that was recovered and is still bound with the original white material covering it's entire body in Chile.

I've led with this title because I believe we shouldn't be too quick in dismissing ancient mummified Alien's and here's why.

The evidence that was put forward is holding up, depending on who you ask? 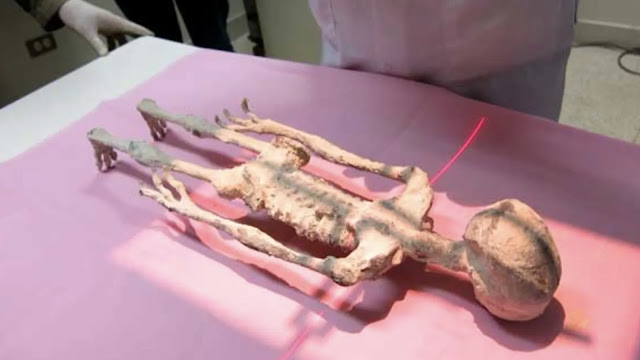 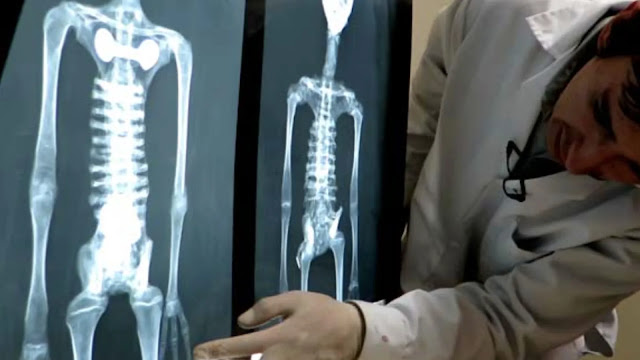 Ancient origins of an unknown species of "creature or early human" was discovered.
Heck it's apparently an Extraterrestrial entity but what really is this? Is it even real...
It's actually undergoing an investigative MRI scan in the above image so we will get an answer instead of everyone's opinions on what this is.
They've examined it with the MRI scan and found 3 egg's inside of it.
Wow! Here's the extraordinary part of all this story!
They reckon it was pregnant as there's egg's inside the "creature, Alien, Human hybrid." Call it whatever you want to? You need to check the links especially the Jungle Doc one below, bottom.
Some people are really convincing when they say it's a fake etc. Let's just let the MRI scan do the talking instead of big mouths dismissing it. I'll definitely believe the MRI scan instead of someone's "opinion" you best believe I'll believe science over an opinion.

Remember one thing about this whole story. Everything is "he said or she said" and no evidence to back it up except for one thing and that's the actual mummified body itself! Seriously, people have been trying to convince other's with clever phrases, intelligent jargon and convincing sounding analogies. But, it seems either way it's not going to be accepted because of the confusion that surrounds it.

Which is a real shame, what's a true shame that is because we could have a bonafide answer to a straight up mystery.

It's one big confusing mess which the MRI scan will clean up for us. Everyone is so focused and trying their hardest to disprove this for some reason? It seems like nobody is focused on what really matters which is the simple fact that it exists, the truth!

That is all this boils down to really - the truth?

Depending on who you ask?

Out of everything conspiracy theories I think I'm drawn a lot more to the ancient origins stories of mankind than other conspiracies.

The reason why I say don't be quick to dismiss the mummified body in the title of this post is because apparently "it's not as airtight of a debunk" as they might think it is.

Like I said, it boils down to who you believe?

Personally I think that the mummified body is a possible human being, an ancient human with a possible genetic mutation. It's quite possible that it's a hybrid of human and Extraterrestrials?

I'm not arguing that it exists because it clearly exists. It's just a simple case of what is it? And if it was an Alien then you can guarantee that there'd be secret forces out there trying to get the population of the world to believe it doesn't exist, to believe that it's a fake or that it's a movie prop. Anything else but the truth!

Considering that it exists and has been checked and it's a real "thing" makes me question the intentions of the people who say it's not real.

But, according to the whole confusion nothing's been pinned down even though lot's of testing and MRI scans have been done. You do know that it's a sign of someone trying to cover up real findings? Make many different claims, on many different platforms, newspapers, outlets etc and what's left? By people who have never seen it, never seen the findings, not even on the same continent yet they know it's a hoax!

It's trying to create confusion before the findings are out. There is a chance that it's a creature, an experiment gone wrong maybe or it's a hybrid. Seriously this is what has been claimed by many different types of so-called truth bearers on a mission to "get to the truth" all the while saying it's not real. Is that really getting to the truth?

It's all very confusing. So, who knows what is the actual truth?

There's one way to get to the truth, go to the source, and make up your own mind?

Ignore everything you've heard from so-called fact checkers and do your own research. Which is what I have been doing for years but on many different types of conspiracy theories. Your the curator of your own truth not anyone else.

Make your own mind up, rely on your own God given abilities to rationalize and compartmentalize, determine and understand.

If it's a real species, then what?

The world will still rotate, you'll continue to pay taxes and read lies about this and other conspiracies at every turn. It changes nothing either way, right? So don't be afraid to make your own mind up. Read the relevant information and decide on what you want to decide?

But please, never accept anything less than a good investigation. One that you've done yourself. If your just looking for answers then you can accept anything. Researching something is a fantastic way to understand something, not just the answer.

Check this link for more details on this. It's in Russian but translates well into English.

Physical examination showed that there was a blow in the pelvic cavity. Perhaps it was the last meal or it was pregnancy, Dr. Edson Salazar Vivanco concluded after a CT scan of the remains.

They've (Snopes) stated that because the fact that Gaia charges $95 per year for unlimited access to it's massive archive of videos and investigations that this is their motive for deceiving people!

But, did you know that when you scroll down the Snopes website page they (Snopes) actually charges $150 which is bloody insane, it's more than Gaia charges lol and yes, it beggar's belief, you cannot make it up.

Check out this link about the 3 fingered ancient mummified Alien's which 100 percent exists.

There's no evidence that it's been debunked at all as far as I can research, it links to a black video with private on it and it cannot be played! It's nothing but people's opinions that it's a hoax.

Here's another link for a 13 thousand years old mummy found in Egypt.

Some ancient elongated skulls can have 30 percent more skull area. This truly cannot be explained unless it's a different species? Head binding cannot add more skull area, it can only shapes what there is.

What has the MRI independent analysis actually found?

Below is an image of the creature being placed on a MRI scan support table which will slide into the MRI scan itself. I understand why they do it. It's because they can.

All the evidence is there, the links, the media, the statements, the MRI scan evidence and the testimonies of the finders. It's all there because they've provided it. Their argument against and their overall assessment is available. I've provided all the links so you can do your own research.

If you believe that it was up to scratch and stella grade A investigative journalism then your absolutely entitled to your opinion. But then you must ask yourself this; what part of it convinced you and what did they prove to you beyond any doubt?

I personally enjoy researching stuff. I rely on my own opinion and I don't need anyone to tell me what to believe in as I have a brain I can think for myself. If your reading this, I know that your the same. It's not arrogance it's us trying to be more informed. People say that they think for themselves and they don't take orders from anyone or they have a brain and can make their own opinion.

But people say a lot of things.

People say they're not sheep... Thinking for yourself is not being a sheep. It definitely looks like arrogance when your not a sheep.

And I thoroughly hope that you do the same. Don't take my word for it, don't take anyone's word for it. Go and research it yourself and make up your own thoughts and mind.

And after today, "I yet again prove to myself why it's good to rely on my own personal opinion."

Jaime Maussan (spelled Jaime not Jamie) has A. Actual physical evidence. He's also had the mummified bodies B. Independently scanned by using MRI independent analysis which came back as this:

You must watch this, The Alien Project and read this because it's fascinating stuff.

In October 2016, Thierry Jamin, a French researcher and explorer, is contacted by grave robbers, or huaqueros, from the south coast of Peru. They show to him some strange mummified objects discovered, according to them, in a secret place of the Nasca desert, and tell him an amazing story! A few days later, convinced of the reality of the facts, Thierry Jamin and his group begin an incredible story. Strange humanoid mummies, with elongated heads and three-fingered hands, will make headlines and upset the world, not so quiet, of Peruvian archeology and ufology for more than two years.

Aliens like the supposedly Atacama desert Alien literally must come down to personal preference for believing in it? It has to because it's divided into two groups which is believer's and non believers. I can only guarantee you one thing, that the truth is going to come out one way or another?

Here's a fantastic video of the Nazca mummy: