This is the best UFO sighting over Paris in France and it reminded me of the Temple Mount UFO sighting which is a UFO ball of light flying upwards.

Here's probably one of my all time ultimate pieces of evidence or proof of exotic technology that there is.

Oh, I totally get it that people are going to be chomping at the bit, struggling to see it! 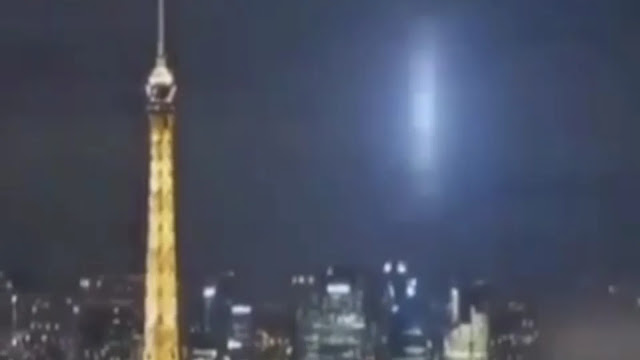 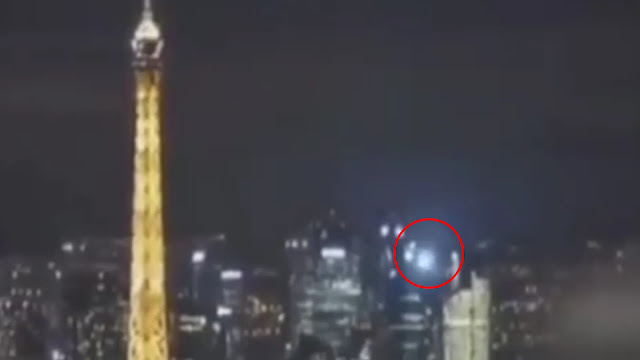 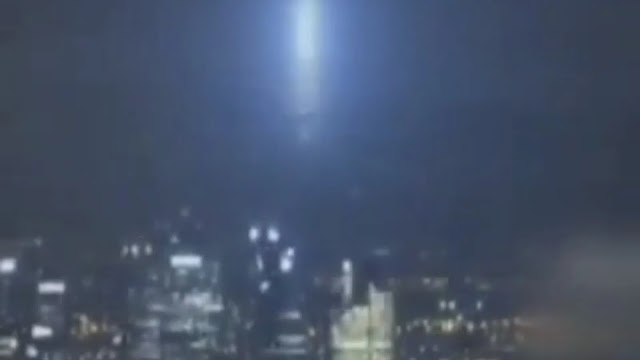 A truly fascinating UFO sighting over Paris in France. Is this the Temple Mount Jerusalem UFO sighting coming back because it's possibly the same UFO?

There's 2 point's or places of interest actually on the roof top of the skyscraper where it's lighting up. We see it pulsing like a heartbeat almost. And as it's doing so, it's shining light onto the neighboring building's. That's telling me that it's a real object that's there. It does, it really light's up all the building's around it.

People might be rolling around in the vestibule laughing out loud, with Jeeves looking on "warmly clapping." But, after slowing down the video, the light's definitely reflecting off all the building's around it. I can only explain it by the light causing the reflection.

If it was just pasted into the video then it wouldn't be able to influence anything whatsoever in the video right! Only at the time of recording the video would anything be able to add or create shadows, or light reflection come to think about it.

It suggests that it's something that is actually there! Tangible evidence.

Do you know how long it would take to create this type of hoaxed UFO sighting using software editing tools?

Or come to think of it just what kind of an epic ability this would take to create it in something like Adobe Photoshop or something else similar to that?

Firstly it would take year's and secondly it's gonna take skills unlike anything I've ever seen. That's not to say that the software hasn't evolved and gotten better. There's a third scenario though which is the common sense part of me coming to the forefront. It questions even the stuff which I'm convinced with.

Even though it's probably the best I've seen, remember to question everything.

I'm talking about the third scenario that blankets everything in the video with a white reflection. Like a white out I suppose? And where it's that bright it just cast's light over everything which makes it look like it's actually there (an object) and brighter than it actually is.

The shadows that are already there just get a bit lighter. In effect, it either takes so much skill that it's impossible to create or it takes no skill at all and it's just the way it looks after the introduction of a bright white light?

Which is it? Let's open it up.

One comment on Instagram seems to think it's lightening diffused by the clouds and fog which is the best comment yet. Have a look you'll see what I mean. Another person just put 5 middle finger emojis up. Another said "project blue balls."

Only one person mentioned the Jerusalem Temple Mount UFO sighting that looked exactly the same a this. Awesome.

See, it's hard to for me personally to check this theory out because I don't even have Adobe Photoshop. I don't want it - because it's a truly horrific piece of software (in my own opinion) for Ufology because of Ufology has been at the forefront taking the brunt of it's stupidity. Faking a UFO sighting in Photoshop rendering it to look real and fooling innocent people into a pack of lies.

And then laughing at them, us!

That's why I'm throwing this out there and asking for people's opinions on this? I'm saying that it looks real, it actually looks epic. But looking at this is one thing and having an opinion another. Just because it's passing through my check's that I'm applying doesn't mean I've overlooked something. It's really looking like a real UFO ball of light shooting directly up into the atmosphere, to me. I can't find anything on this UFO sighting at all.

Here's the video which occurs over Paris France: