Large Building With Energy Light's Flying Above It Over The Cloud's

This is a really bizarre looking event happening here possibly in Austria over a building. It's a massive light event above the clouds not under them.

This is about as strange as it get's in terms of phenomena, it's been labelled as UFO activity but is it?

I'm not so sure that this event has been marked down correctly as what we're seeing here is some sort of energy burst above the cloud's. 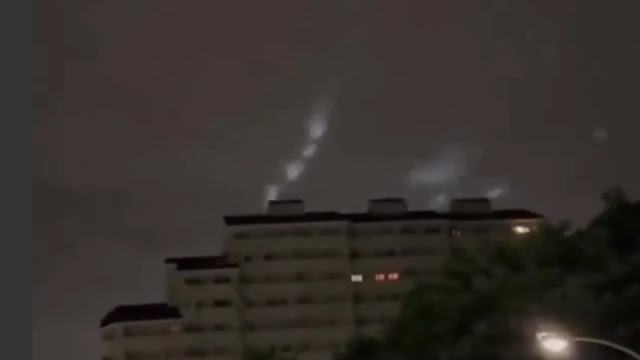 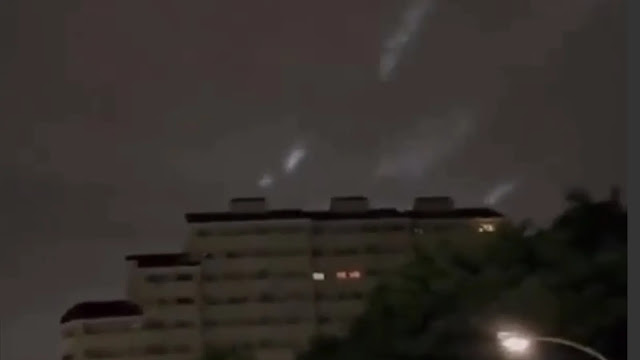 These 2 screenshots don't do the video any justice, the video looks far better.

I'm saying above the cloud's because it's hard to find where this could be originating from underneath the cloud's?

The light's look like they're shining through the cloud's, not up and onto the cloud's. It can't be atop this massive building which I'm hoping that someone will know where this is? A person who has commented on the Instagram video say's"it's definitely spot ligh's" and until we find out, it's a truly strange phenomena. That and the possible 2 UFOs.

If the Instagram account Mysteries Unexplained is referring to the 2 white "tiny Orbs" which I think they are, then yes it's plausible that both the UFOs and the light's on the cloud's could be connected?

This is definitely not a laser light show because they look nothing like what we're seeing here.

It would be a very uncanny strange occurance if both phenomena wasn't connected. So, it stands to reason that they're going to be connected to one another.

As soon as the video starts we see a single small Orb in the top left hand corner of the video. Then at 6 seconds into the video we see another UFO Orb join the other one. I did think that these was butterflies or birds, a moth r something else entirely like that. But it's night time and it's definitely not the Amazon rain forest so what the heck are these 2 doing flying around? Then there's the exquisite light show.

Mysteries Unexplained believe that it's a UFO sighting happening, I'm thinking about a phenomenon of some sort because it's the energy light on the clouds I'm focusing on. I'm focusing on the light show because I don't know if these tiny Orbs aren't just some reflection on a window in front of the person who is filming this? Or is it a light reflection on the lens of the camera?

One person who commented on the Instagram video said that they'd seen this in Austria the last few days. That was posted one day ago. Other's are writing in the comments that "they're here, don't be afraid" meaning Extraterrestrial entities. Some people are saying that it's a laser show, but then another said"have you ever seen a laser show, because it doesn't look like this" which I have to agree with him. Laser show's really don't look anything like this at all.

Some are asking "is there a meaning behind these light's" which I'll be honest with you, I'd really like to know just what is happening?

We see light's coming over the building but these are coming from behind the eye witness and to their left. This is bizarre considering that the building is a fair way off from where the witness is.

Or are both the small Orb UFOs and the energy lights on the underside of the cloud's nothing but natural phenomena and misidentified?

Is what we're seeing, really nothing but spot lights? I'd like your thoughts on this...

If that's the case, then please can someone explain what the heck is going on? Thank you.

Strange UFO activity caught on camera. What do you think is happening in this video? Is this authentic UFO footage?