This is a fantastic UFO sighting which is actually going to go down in history as a true evidence based Pyramid shape UFO sighting over Moscow Russia.

Okay, digging through the masses of information and evidence of this triangle slash Pyramid shape UFO sighting over the Kremlin, it just goes deeper and deeper. 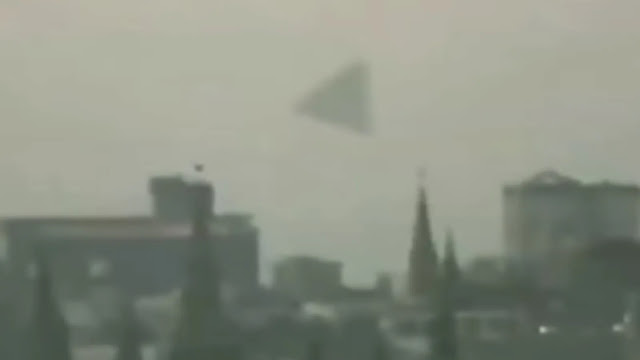 There's a lot of people and news agencies around the world that have looked into this UFO sighting and backed it.

We're talking about most major news agencies that covered this and the UK's very own Mulder weighing in on this by stating "it was one of the most extraordinary UFO clips that he had ever seen."

The New York Post reported on a large Pyramid shape UFO over Moscow and the Red Square in Seperate individual clips! This is what I'm calling possible, a possible UFO sighting of probably secret technology.

I've researched a lot of UFO sightings and read countless UFO events over a long time, decades. I've read books, TV shows basically as much as I could. Recently though I've had a lot of that research start to make sense to me overall. I mean, there's one thing researching something "anything" to the point that you could quote it word but it's another thing to find life changing beliefs start to manifest from that research. It's the whole point of it I suppose.

The video looks genuine enough and it does seem to be tracking the object as opposed to just a copy and past into a random video. A holiday video that someone's manipulated. But that doesn't seem to be the case here.

I mean, the thing that probably caught Nick Pope's attention is the exact same thing as is what's grabbing my attention. The camera operator is definitely zooming into the UFO!

That's what makes this stand out from at least 70% of every other UFO sighting with UFOs of this size! That's what stands out to me. The other thing is that if we take away the UFO, there's nothing else there, no reason for the camera operator to zoom in.

This already bizarre story becomes more unusual when Michael Salla, Ph.D., claims “the pyramid UFO actually appeared on December 9, the same day of the mysterious Norway Spiral Lights.” Yet Pravda, for some reason, reported the flying pyramid not when the incident occurred, but nine days later. Was Pravda trying to downplay any possible link?

That's why agai, this looks so genuine. It's actually not a lot in terms of evidence but if we compare it to other UFO sightings, guy's it's a 2 fold increase in evidence! That's why for me, I'm liking it. It will look to some, to fantastic, they literally or simply (whichever you like) for them to accept it. Conditioning unfortunately has them in this bubble where anything outside of "their" life, their reality or sphere of influence call it what you like, but they will not accept it. The first typical thing is they will ridicule it. Because they don't understand what it is, what they're seeing.

They'll revert back to an age old stance of poking a stick at it, while not computing what they're seeing. "They" will not be able to tell you why they don't believe it or like it except for "it doesn't look like one" because you know, they do know what they look like! Lol.

But anyway, it's a truly good job for UFO believer's that the people who was once in Government that was involved in keeping it all secret are now in retirement homes. If this generation had gone on record (by the way) and said that these have been going on for a long time, they'd be saying that the last Government and the one before that was covering it up. So it only goes back to early 2000's.

Do we really want blame or the truth? Both "and why not?" There's evidence of UAPs going way, way back and reports from pilots going way back so why not hold account the ones who actively covered it up? Because if they do, someone might ask "what else was they lying about, what else is there along the same evidence based path, that they deliberately covered up?"

Onwards and upwards for Ufology where what was once laughed at, belittled and even stigmatized has now become reality in the form of UAP disclosure. Even though personally I don't need the Government to tell what 2+2=4. I understand that some people do need that reassuring voice before they'll believe anything.

"UFO pyramid reported over the Kremlin"

A giant pyramid which appears to be a UFO hovering over the Kremlin has caused frenzied speculation in Russia that it is an alien spacecraft. The object has been compared to an Imperial Cruiser in the Star Wars films and witnesses estimated it could be up to a mile wide.

Two film clips exist which appear to show the same object and footage has been repeatedly playing on Russian television news channels. The shots, one taken at night from a car and one during the day, were both filmed by amateurs.

The 'craft' was said to have hovered for hours over Red Square in the Russian capital. The clips of the 'invasion' have gone to the top of the country's version of YouTube.

Nick Pope, a former Ministry of Defence UFO analyst, said it was "one of the most extraordinary UFO clips I've ever seen". "At first I thought this was a reflection but it appears to move behind a power line, ruling out this theory."

A spokesman for aerospace journal Jane's News said: "We have no idea what it is." The New York Post is your source for breaking news, news about New York, sports, business, entertainment, opinion, real estate, culture, fashion, and more.

It's a long quotation for a simple UFO sighting don't you think? The major news agencies around the world have gone for this one like a Donkey for l... Whatever Donkies eat. It's a great big craft of some sort just rotating in the sky above the Kremlin and the Red Square. This isn't a normal day at the office by any stretch of the imagination.

Here's just a few of the worldwide news agencies that ran this story, they are as follows: Yogaesoteric, New York Post, The Mirror, The Telegraph, RT, Pravda and the list continues! Seriously, that's just a few and without mentioning all the huge names in Ufology disclosure and the research side of Ufology.