This cube shaped UFO was filmed spinning over two locations in the USA. It was filmed first in Missouri and then in Cleveland Heights Ohio just after.

This footage, at the beginning shows the silver-cube UFO with light's over stores in Missouri dart to the right, then left but is it man made or Extraterrestrial. 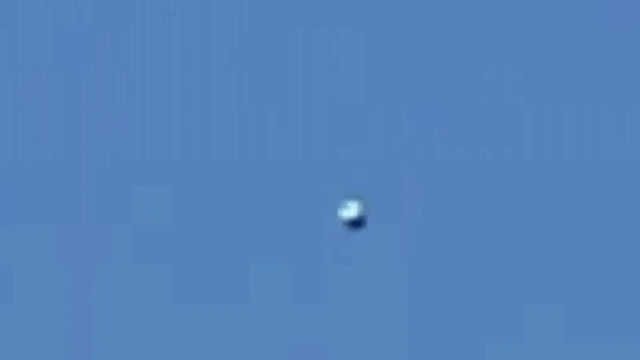 This is so different from what we're used to seeing by any stretch of the imagination and that's an understatement.

I'm definitely not used to hearing about a specific shaped UFO filmed in one location then in another location 700 miles away only hours later.

It was first filmed over Springfield, Missouri which the witness noticed while he was driving home from work. It was over some shop's and if you ask me this is the type of UFO you'd want to see if ever you hope to see one because it's in my view almost certainly real?

It was seen by onlookers in Missouri the first time and then it was filmed not long after that just hours later according to the report's in Cleveland Heights in Ohio which is 700 miles away. The silver cube is spinning and if we hear right, the witness say's there's light's on the cube so if it's a drone, how the heck is it pulling that one off? I suppose it's not impossible (that's just my opinion) but can you imagine how much engineering or tinkering it would take just to create it and then "hope" that someone films it? For what, what achievement is there to be had by hoping someone films it? You'd expect a sure thing if you put a ton of work into it? Unless this is that sure thing?

Has the invention of drones made every UFO sighting doubtful?

You see, the more I think about this silver colour UFO the less likely it seems to be a drone and the likelihood of it being a real UFO sighting goes up (no pun intended). It, in other words, it just keeps on getting better and better.

I mean it's one thing wanting or hoping that you see a UFO, personally I don't care what it looks like as long as it's real. It's shape and size etc is literally neither here nor there to me. I first saw this or become aware of these UFO sighting's a bit back and this cube shape UFO stood out back then. I thought, I'll find out more about it and I'll write about it.

I didn't hear about the second sighting in Cleveland Heights Ohio though until recently.

It's now (as it turns out) been filmed literally just hour's after it was filmed in Missouri over the shop's which look closed down to me. So, this is gonna come down to what you want to believe after you've taken in the claims, taken in the video, read the opinions and the possibility of this been filmed in two places.

Is it the same UFO cube?

Is it a blooming drone?

Plus, are there any other related cube shape UFOs caught on video that's out there but haven't yet been reported to anyone... yet?

Once I got to my closest point with the object I could tell this was not trash – it looked like a solid metal cube that was rotating in multiple directions.

Second quote by the Sun:

Matthew Jandecka, 44, was sitting on his porch in Cleveland Heights, Ohio when he recorded the puzzling presence in the skies overhead. I noticed it because it appeared to be a metallic rotating cube flying in the sky headed my way. I knew right away it was a UFO, and I believe the UFO was both extraterrestrial and unidentified. I have no doubts about it.

They do look very similar I have to agree, people have put these together based on looks, based on a possible timeline of events and based on the people who have reported on these must be UFO believer's otherwise it wouldn't have got this far. If a non-believer wrote about this, it would not have got this far because it would have been dismissed.

So, we're lucky I suppose in that because it's a truly strange and intriguing double UFO sighting, the strength of the possibilities to this has carried it out and to the world. Ufology dare I say it is changing. People are coming round to the real possibility that intelligent life not only exists but that it's examining us. We're probably being surveyed, under surveillance.

I mentioned to someone just yesterday about the Voyager 1 satellite which is 14.6 billion miles away from Earth. We're still controlling it, it's left our solar system and we can update it, communicate with it and we're going to be turning it's camera back on. If that's based on 1970's technology and we can still communicate with it, control it, update it's "1970's software" and give it command's. Then can you imagine what an intelligent life in space could be controlling in our atmosphere?

It's 14.6 billion miles away from Earth!

So, when I see UFOs flying in the Earth's atmosphere, I think that could be Alien controlled based on the answer I've just written.

Here's the extraordinary video which shows us the cube shape UFO:

If you've got any thoughts on this please share it with us in the comments section below, cheers. Also please can you share this post, thanks.