UFO And Alien Depicted In Cave Painting In India 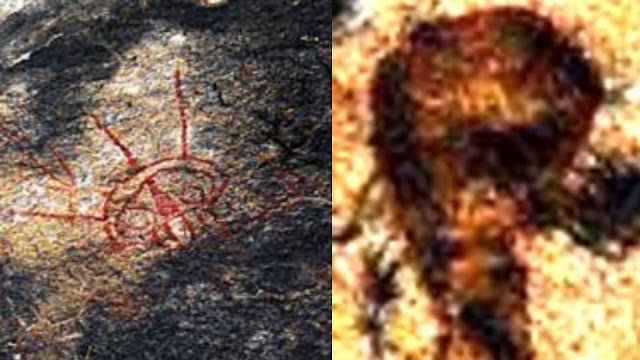 Here is an ancient cave painting or cave mural in India depicting what can only be described as a UFO. It looks like one, as soon as you see it it's the first thing that comes to mind and the crucial point to all of this - is this:


It looks "like nothing from the ancient world". It couldn't be mistaken for anything else other than a UFO or Unidentified Flying Object as this is what we would call a UFO today.


The Spaceman Of Chhattisgarh, India. Ancient humans depicting Aliens, what a load of rubbish - I hear you say? Well, for those ney sayers out there. This isn't a gallery, it's not a teen caveman tagging a fresh wall with a tin of spray paint. It's not a lesson in imagination and creativity. They used different colours of clay possibly plants and even bugs to get different colours. They depicted what they saw and they painted it to their ability probably after meeting with the Aliens. 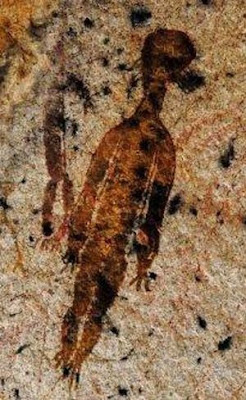 If you saw something like this in the ancient world, you would't call it an Alien or a UFO or an Alien craft because there wasn't any words (or grunts, shunts or mutters) for a UFO - so you'd have to "literally" refer to it in a painting or a mural, because that's just literal common sense...

Did ancient people have literal common sense though? 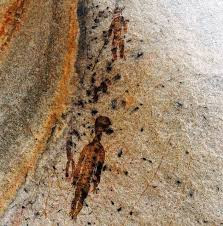 This Alien is tall compared to the smaller being beside it. 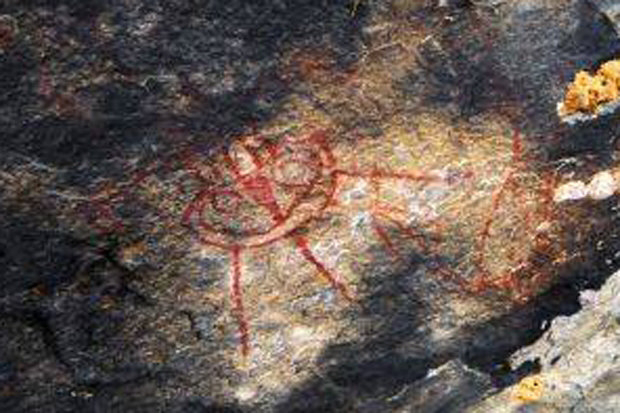 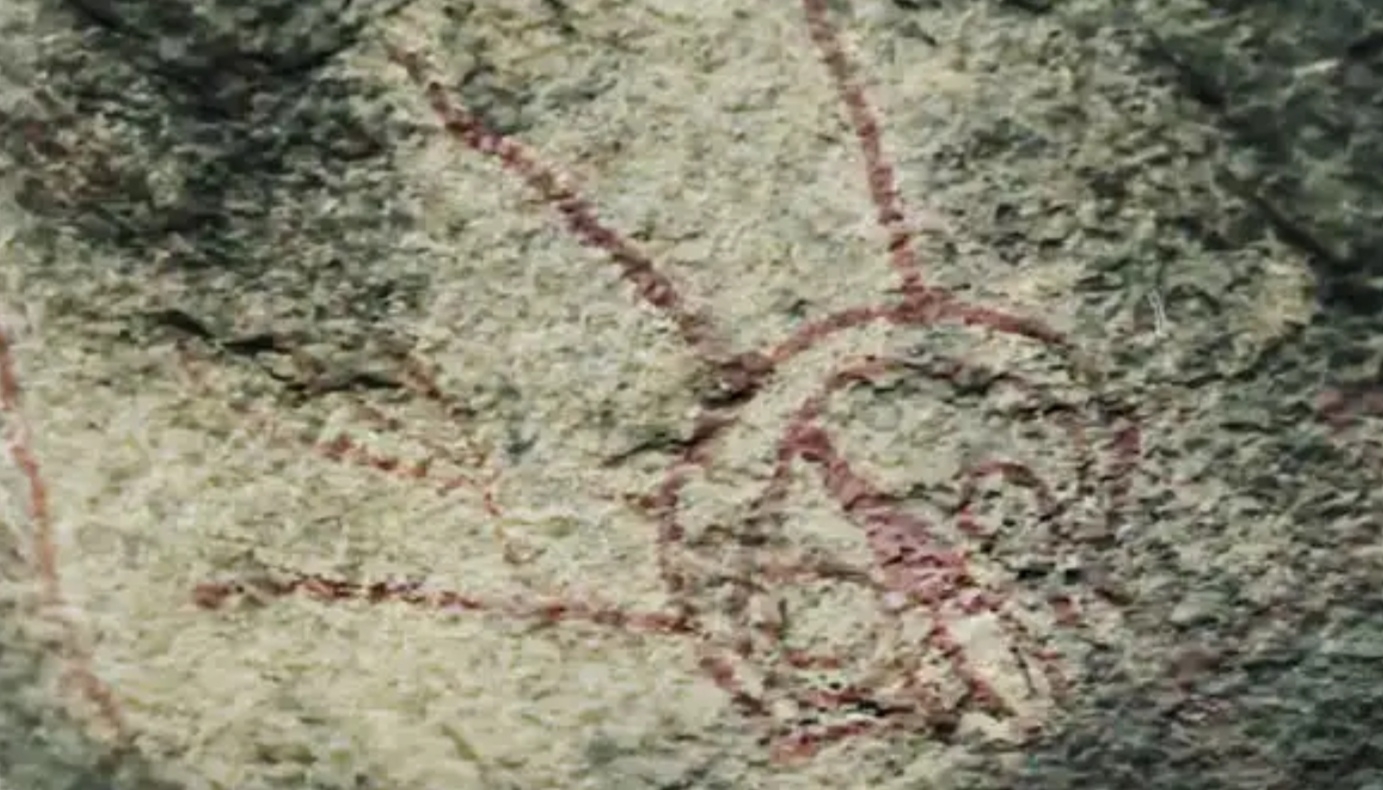 The craft above has 3 (possibly 4) antennas.
The craft above has 3 antennas or tripods depending on which way you look at the image upside down it's tripods and right way up is antennas. It has what looks like a "thing" or entity inside of the interstellar spaceship. There are two circular windows or portholes and what also looks like a ramp coming down from the craft's main section.

It is a quick drawing (painting) or it looks like it's a quick impression of as I said earlier, a UFO. If this was an Alien craft then this is life changing! I say life changing because every single piece of history or what we know as history would all have to be changed.

Degrees would change, timelines would change and of course the "origins of mankind" would all have to be reevaluated and examined as a maybe and considered that we could of been influenced by this visitor but to what degree is un known and speculation.

As long as we're speculating we could even ask if this was a documented encounter of Aliens with mankind because it was when mankind sent a human with the Aliens or did an Alien visitor come to stay with us?


There's a million and one answers to why this drawing or painting or mural (whatever you want to refer to it as) and only one answer is right, that is the only fact about this. That and the other fact that this exists.

This bizarre looking painting found in a cave in India has baffled scientists for its supposed depiction of an alien UFO beaming in the sky.

The puzzling mural from Charama, Chhattisgarh, dates back some 10,000 years to a time before humans have invited the wheel. Archaeologist JR Bhagat who studied the cave paintings in 2014 argued they were concrete evidence Aliens have walked among us in the past. He said: “The findings suggest that humans in prehistoric times may have seen or imagined beings from other planets which still create curiosity among people and researchers. “Extensive research is needed for further findings. Chhattisgarh presently doesn't have any such expert who could give clarity on the subject.” He added: “The fan-like antenna and the three legs of the vehicle's stand clearly show a similarity to UFO type craft.”


The fan-like antenna and the three legs of the vehicle's stand clearly show a similarity to UFO type craft JR Bhagat, Archaeologist


So there's a lot more to this story than meets the eye guys, it's loaded with intriguing and very, very mysterious cave paintings, stories or legends, myths and local knowledge backs up the theory that "sky people" came down from space and took people away who was never seen ever again!

It's a basic modern story of an Alien abduction case but seen as though there wasn't anyone to really stop the Aliens it continued.

The evidence is lots of cave paintings which is equivalent to a eye witness testimony and then we have the local knowledge passed down from generation to generation.

This is a primitive way of keeping records which I'm inclined to believe as I don't doubt whole cultures or peoples way of life which dates back thousands of years.

Chhattisgarh state department of archaeology and culture plans to seek help from ISRO for research on 10,000-year-old rock paintings depicting aliens and UFOs in Charama region in Kanker district in tribal Bastar region of India. It is located about 130km from Raipur, the caves come under village Chandeli and Gotitola. In the local villages, few worship the paintings, while others narrate stories they have heard from ancestors about "rohela people", who were said to land from sky in a round shaped flying object and take away people who never returned. 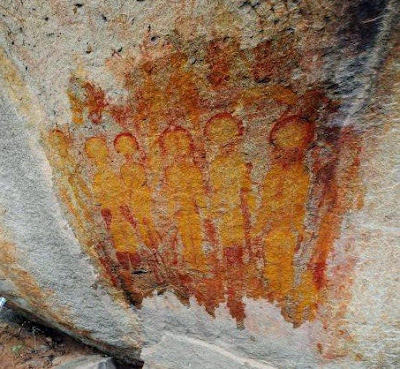 According to Times of India, Dr. JR Bhagat found remarkable similarities to recent UFO and Alien Sightings in 10000 years old cave paintings. So much that he asked for research assistance from NASA and ISRO (Indian Space Research Organization). The paintings are located in caves near the town of Charama in Chhattisgarh, a state in central India. Most of the paintings are the usual drawings of humans, animals and everyday life in 8,000 BCE. But it also stunned many because some depict kangaroos and giraffes (not native to India at all) and fish-like-creatures. Now an archaeologist recently found new paintings of even stranger beings.


“The findings suggest that humans in prehistoric times may have seen or imagined beings from other planets which still create curiosity among people and researchers. Extensive research is needed for further findings. Chhattisgarh presently doesn’t have any such expert who could give clarity on the subject,” Bhagat told to the Indian journal. The nose and mouth are missing. In few pictures, they are even shown wearing space suits. We can’t refute possibility of imagination by prehistoric men but humans usually fancy such things,” the archaeologist said.

There are several beliefs among locals in these villages. While few worship the paintings, others narrate stories they have heard from ancestors about “rohela people” — the small sized ones — who used to land from sky in a round shaped flying object and take away one or two persons of village who never returned. It is not the first time we found cave paintings like this, but never until now with such detail. Flying Saucers, Equipment, Space Suits, depictions of abduction are some of the images one can find in Charama. 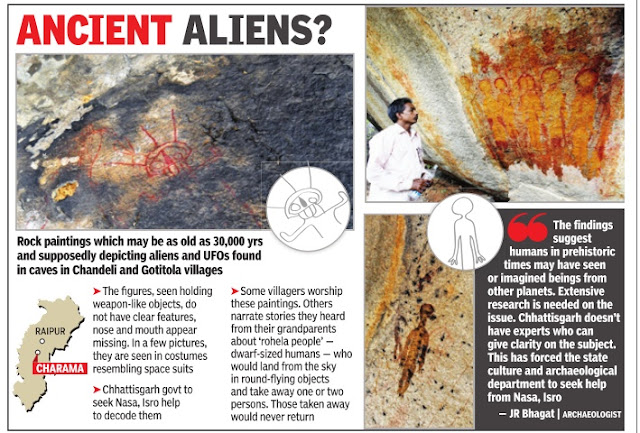