This is some of the best Alien and UFO evidence that there is out there and it's been with us for decades and decades. Some space agencies have even been doing secret research in to this event alongside the other main missions like missions to Mars by NASA. the European Space Agency has also been secretly researching this Alien Mothership UFO incident. There's been many probably and as they're secret well that's why we don't know but the ones that we do know about is because of whistleblowers and leaked papers. If they are seriously looking at this event instead of accepting the official "answer" then that means there's many people high up who do not accept the results of the investigation that it was metric and imperial measurements which destroyed it! Well, something this simple is designed in to the systems to not disable it. Which begs the question, even back then in the late 1980's we had system,s in place to catch this so why wasn't it effective at doing it's sole purpose? It did do it's job, they just blamed it on that because they didn't have an answer other than what it was. An Alien Mothership destroyed it but they can't tell us that so they make up a "likely story" and feed it to the public, but even the public isn't that gullible and so secret investigations have been going on side by side with main missions. 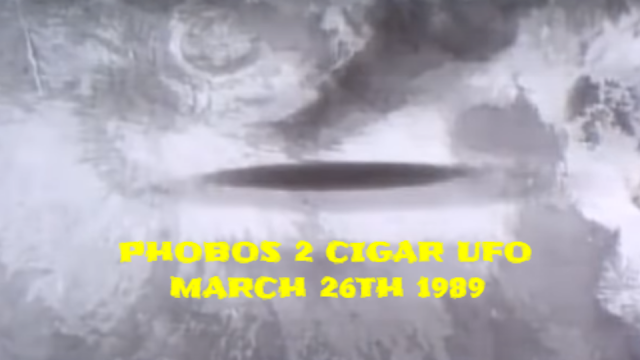 Phobos 2, probably the most interesting probe in human history because of it's encounter with a huge Alien Mothership shaped like a cigar. There are many, many versions of what actually happened or in my opinion "speculation" as to what occurred on that day in March 1989?


We need to stay on track and only go off of the evidence which is plentiful and in this case it's the last transmitted images which tells everything we need to know about this huge UFO encounter in Mars' backyard.


Phobos is the innermost and larger of the two natural satellites of Mars, the other being Deimos. Both moons were discovered in 1877 by American astronomer Asaph Hall. Phobos is a small, irregularly shaped object with a mean radius of 11 km and is seven times as massive as the outer moon, Deimos.

Well, we've got to stay on track and not lose focus of the facts. The facts are in the Russian space agencies (Roscosmos) images. The Phobos 2 last transmitted images. These actual images are not speculation but what is on them, is speculation. The title of this post is speculation but it's the widely accepted opinion or theory should I say - outside of the Russian space agency Roscosmos and NASA.

Phobos program was an unmanned space mission consisting of two probes launched by the Soviet Union to study Mars and its moons Phobos and Deimos. Only one of the probes made it to Mars, and just days before it was due to land, it sent a few mysterious photos to mission control before going offline forever due to a critical failure. The Mars orbiter had returned 38 images with a resolution of up to 40 meters - before the strange event caused a failure and it was lost forever.

AND DID YOU KNOW:

Since that historic event, space agencies around the world have quietly funded extraordinary experiments, sent alongside successful missions, such as the Mars Global Surveyor, Mars Express, and Mars Reconnaissance Orbiter.


With the hope of uncovering the mystery of the Phobos anomaly, these secret experiments may provide the data needed to either explain the 1988 event or confirm the existence of an exotic force protecting the moonlet.

Yes, it's true. Secret missions along side the main missions are usually called clandestine, top secret, classified, eye's only, collusion and on a need to know basis etc etc. Why are they called this, because they don't publish their findings. They will not divulge the discoveries "if any" to anyone outside of the secret program(s).


So it begs the question, what if anything could be the answer to this decades long anomaly? The huge "Alien Mothership" absolutely left everyone in that Russian agency in no doubt that an Alien UFO Mothership did indeed destroy their probe just above Mars.

But, Russia has NOT gone back ever since. Why? What else was beamed back with these images? Was there a stay away note attached or was there an image or video which showed more than shadows and a white tube? Did they get a full on view of an Alien with a gun and a message wrote on paper looking at the camera which said "come back and your dead"!

Well, whatever it was the Russians haven't been back.

So, what's on Phobos in the first place?

A monolith, which is a geological feature consisting of a single massive piece of rock. Monoliths also occur naturally on Earth, but it has been suggested that the Phobos monolith may be a piece of impact ejecta or even an ALIEN structure.


The monolith is a bright object near Stickney crater, described as a “building sized” boulder, which casts a prominent shadow. There in plain view, a large rectangular object undoubtedly resembling an artificial monolith stands alone.

These are the word's of Buzz Aldrin (second man to walk on the moon) talking back in 2009:

My final thoughts on this:

Is this Monolith something to do with what the Alien Mothership UFO was "protecting"...