The Telescope fish is a deep sea creature with glass eyes and transparent parts of the body. It looks like an Aliens pet. It's Creepy with big teeth.

Here's a proper weird one that reminds me of a muppet, it's a deep sea fish that looks like an Aliens pet or a very rare Elf from the film Legend with Tom Cruise!

I don't make them, I just give them a life force.

That's probably the quote God would say if someone asked him/her "what was you thinking"?

Creepy creatures like this haven't changed their look in forever and have been down there in the deepest part of the oceans without evolution having a look in. 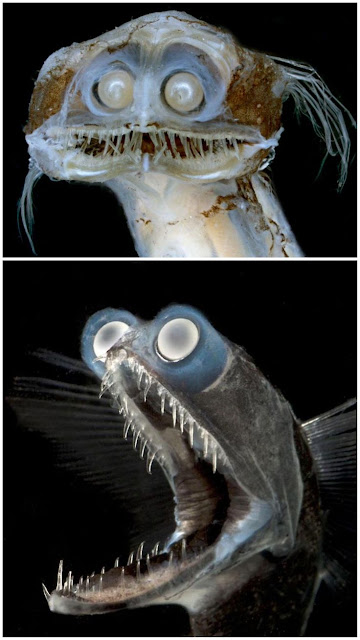 God would probably turn around and say, I wasn't really thinking straight way back then and plus he'd say, how was I to know that humans were going to be able to go down that far to the bottom of the ocean. Nobody was supposed to see that.

Or, I was drunk with a large hangover so I did my best given that tools hadn't been invented yet. But seriously though, my reasoning for this post is that if living beings reflect their environment and the nature of their role like predator or prey then why does this look like it does?

Or, are Alien Greys humans from the future...

Telescopefish are small, deep-sea aulopiform fish comprising the small family Giganturidae. The two known species are within the genus Gigantura. Though rarely captured, they are found in cold, deep tropical to subtropical waters worldwide.