Obama Tells James Cordon "When it comes to Aliens, there's thing's I Can't Tell You Live on Air"

Barack Obama on the late late show talking about UFOs and Aliens with James Cordon and Reggie. Obama revealed contradictions about UFO disclosure.

Right, there's no sign "yet" of Aliens walking on the White House lawn but don't worry because it's beginning to happen, you just need to know how to listen, read and put it all together with common sense.

At least I bloody hope it goes like that?
I'm going to try to use common sense to interpret what Barack Obama said in his guest appearance via satellite on the late late show with James Cordon. Obama said this in the past before the Presidents office "I'll definitely make available the information on UFOs and Aliens, but after the Presidents office he has said, there's things I can't tell you".
He said that to James Cordon on The Late Late Show based on nothing but common sense, I'll get rid of the B.S and focus on what he says and it's probable meaning.
Okay I'm being a bit sarcastic but these Presidents get me so mad. They're all full of s**t just trying to get another vote because he already knew for a fact that he's not allowed to tell us,he's a politician so he's savvy when it comes to national security issues. So, I believe that makes him a stone cold liar.
I hate, and I mean I hate liars. Nobody likes liars because they lie, it's what they do.
I won't be focusing on every single word that he said on The Late Late Show, that'd be proper boring because he's quite boring to be fair and accurate. It's just a few phrases that is all I'm gonna be choosing because to me, it's these few sentences that he said - that are truly revealing and it gives us, you and me a couple of insights plus other things and interpretations that are either hope for UFO/Alien disclosure happening.
Or he's just stalling like every other President of the USA to come before him and after him.
Trump said the same sound bites but he gave us the 3 UAP videos which to be fair, you cannot put it any clearer than that other than taking us down to S4 by the hand and showing us the 3 UFO videos on the side of the Hangar with a projector. 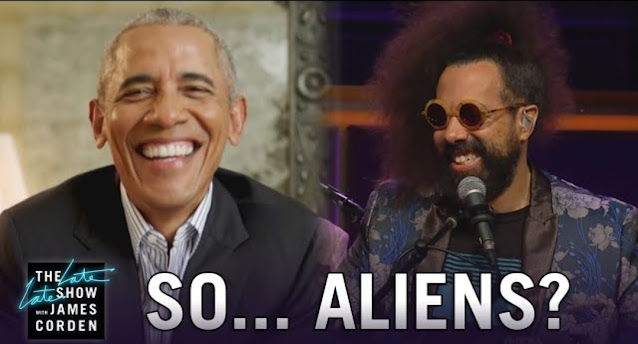 Credit: The late Late Show With James Cordon/Canva/UFO Sightings Footage/UFO News/Barack Obama.
Because let's face it, every President just before they get into office say this:

"when I am elected, I will definitely make all the UFO files public, you can count on me to do that".

Every President, ever to take office.

Well, it's now 2021 and every one of them puppets have lied out their backsides just to get our votes. 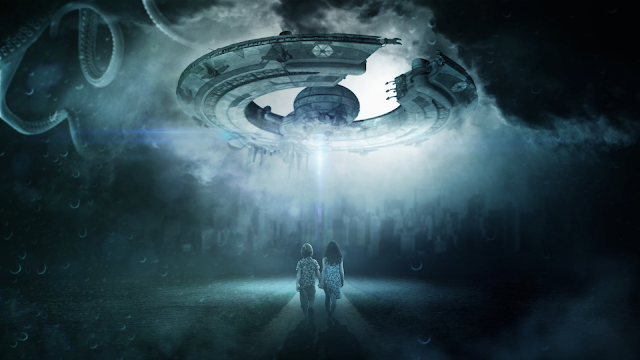 Credit: Canva/UFO Sightings Footage/UFO News.
Here's an example of what I mean by common sense interpretation.
If Barack Obama says this (as an example only):

I've seen the latest Star Wars movie and it was absolutely amazing, but I fell asleep as I'm boring.

I then think this -

Which means that it was Star Wars: Episode IX – The Rise of Skywalker (2019) after I just looked it up. That was the last one made.

The fact that I used common sense to get to that answer was easy right, it's what will stand me (and you) in good stead when we try to decipher what's been said about Aliens and UFOs by Barack Obama plus other politicians and then the rest of the world might be in a better place to understand what they are actually saying. 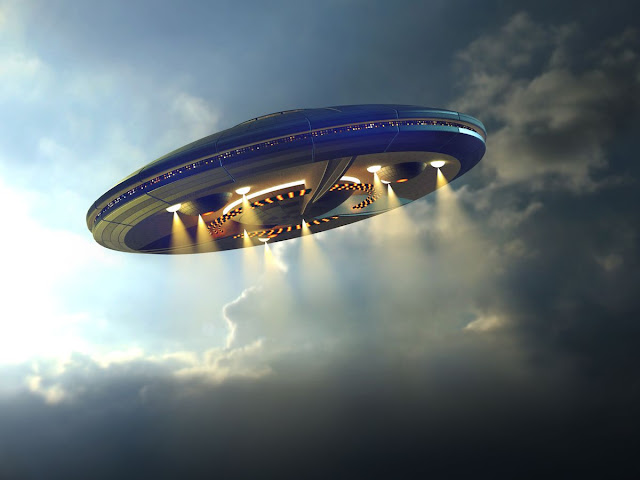 Credit: Canva/UFO Sightings Footage/UFO News.
In 2020 everyone in the world was pretty much on lock down (so I went to 2019 to search Google) there was no acting, no movies being made (like normal anyway) no theaters to watch the movies in or anything like that "happening anywhere in the world". So I just looked up the Star Wars movie list of chronological order of released movies.
So it's just simple deduction, but don't be mistaken for one second because there's still plenty of people out there who will always and I mean always deny UFOs/Aliens exist and will never believe it. They'll deny any of the common sense answers and answers in every language possible come to think about it.
In this video I have created, we'll see a UAP fly past the SpaceX capsule in it's latest space mission. Seriously guys, them little buggers are everywhere in space, in the atmosphere, on the Moon on Mars (I've got loads of UFO videos uploaded to our YouTube channel) and there's UAPs at the ISS, in formations in the sky during the day and at night time all witnessed by single people and multiple people. Check out this video:

Credit: SpaceX/NASA/UFO Sightings Footage/UFO News.
When it comes to Aliens and UFOs, you must make sure that you dot the I's and cross the T's and be as open minded as possible, put yourself in their shoes and think about why they will not believe in Aliens. Don't get caught up with the stupidity though or try to understand insanity and definitely do not to get caught up with the obvious crazy 🤪 stuff like wearing a tinfoil hat with foil liners in your shoes. These are not common sense approaches.
You see, just 10 or maybe 15 year's ago I couldn't of said that without being judged already (I still probably will be judged anyway) because the second I mention Aliens or UFOs, the sniggering and the eyebrows start to raise, the arms get folded and people just switched off.
But, let's fast forward to now the present day and it's a very, very different story and I must say that it's never been more exciting than right now for the UFO community!
Here's why...
Obama has just been on The Late Late Show With James Cordon and dropped probably the biggest bombshell of all even though it's contradictory.

“The truth is that when I came into office I asked.
“I was like, ‘All right, is there the lab somewhere where we’re keeping the alien specimens and spaceships?’
"They did a little bit of research …. and the answer was ‘No'.”