Oh my gosh, it's a good thing that "reality" lets us free think because this one could have been devoid of any such information. Round and round we go

This is one of the most documented and talked about Extraterrestrial structures in the known universe (hint hint) but unfortunately the mainstream media can only talk about it for so long.

They must move on to more important things like "who wants to be a millionaire" or celebrity fashion trends! Yep, such is life we're all missing the point where the past is and the more we can understand the past, the more chance we'll know more about where we are going. But what's a few unimportant thing's got that world changing events hasn't... It simply beggars belief!
You want the truth, you can't handle the truth! I had to do a Tom Cruise quote, it felt right.
So when people say "why isn't it in the news" well it's probably been in the media? I'll admit that it's hard to find out if it's been in the media and yes it makes a whole new level of noise if it has been in the mainstream media, but it's there alright, you just need to dig a bit deeper but it shouldn't even matter if it has or not, really?
Don't forget that it's the mainstream media who manipulated us in the first place so for real news, do your own investigation. Mainstream media where the ones who taught people how to ridicule anyone who has a different opinion than theirs and it's the very same people who have ridiculed UFO sighting's witnesses. You get the drift.

Researching Alien structures on the Moon "don't change" so nothing has changed because there is nothing to change, it is what it is!
Firstly, I just want to say "thank you, what an absolute star, you rock" that's deliberately to one person! I found strength in your word's. June.
UFO Sighting's Footage is a UK number one website because it's something that I have alway's wanted to make, I created it from a dream. I longed to make sense of something that was real to me and I was sure it must be real to everyone so I percevered on? And then the US Department of Defence (DoD) released multiple UFO videos saying that the crafts aren't from the United States, it's not Russian and it's not the UK's and called them UAPs (Unidentified Aerial Phenomena!
So then, we was introduced to the Unidentified Aerial Phenomenon (UAP) which is a very serious and real admission from the United States Government officials that UFOs exist. But they, like I've just mentioned to you, they really don't know who's behind the physics defying and gravity defying aerial vehicles - i.e, this is UFO disclosure.
I longed to make sense of something bigger than what I can see in front of me in the real news. Big time, the stuff in front of me was immeasurable, it was distracting and very often it was surreal.
It's a journal, it's my journal but for one very purpose and that's UFOs. I know that you're going through a lot and we all are. We will see it through, we will get there.
It's not everyday that a person is shown their own self. I've got so many flaws, we all have. I made a career out of looking to far in front. I set up the next two steps without even knowing if the stepping stone I'm stood on, was stable. That's completely insane because it's a side I couldn't see for love nor money. It's something that a fair amount of people struggle with everyday. What I'm saying is, if you choose to commit to something, make sure you have belief. That's the key ingredient.
To the millions of people who read this blog; (Stats). Forgive yourself right now, you must first forgive yourself before you can even begin to understand other people's forgiveness. What it means to accept other people's flaws in the shape of a forgiving hand!
Moon anomaly:
It's a chimney, or is it a satellite dish but "oh my God" is this a brilliant thing and it's most certainly right out of place! It's the best and ultimate in space anomalies. Like this blatant and obviously Intelligently created chimney or air duct for breathing perhaps for an underground bunker or city but it's definitely an unknown system but for who or what, we might never know? 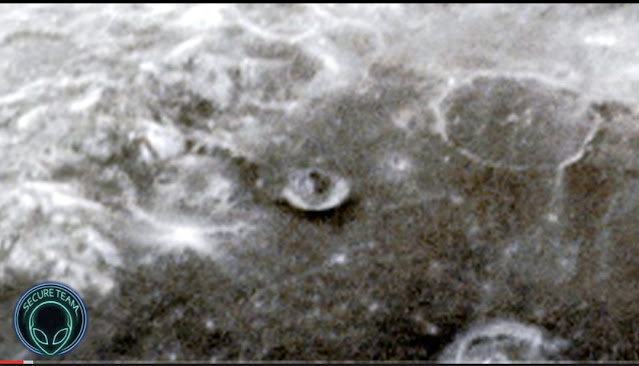 Credit: Secureteam10 YouTube Channel/NASA/UFO Sighting's Footage/UFO News/Ufosfootage/Canva.
Air,
it might not even be a thing on the Moon (it's not), but there's a definite chimney looking structure on the the surface of the Moon and "omg" there's a large billowing cloud of something that 100 percent is legitimately caught on film whilst the early Moon mission reels are filming. This isn't even a debate anymore because it's a bloody fact of life. It's a genuine and sincere video that was uploaded to the internet for everyone to see and it came from the old school understanding where a chimney on the Moon is not blooming normal at all!
Oh my god, NASA has been aware of this is Alien foothold for generations and ultimately they've been covering this up time and time again. I guess there's a reason why it's called NASA "AKA" Never A Straight Answer!
It's inside the Moon, but it's actually protruding upwards or outwards and away from the surface in which means that we're pretty much only seeing a fraction of the structure. Does it mean that to, the nature of the Moon structure (ie dead, barren, grey, none usable and is wrong) should have a chimney that's none existence, well that is just a joke!
Related post
Military Opens Up On UFO In Amazing Footage
The Moon is a celestial body, it's apparently been placed there by Gods of old and Gods that had powers immortal or techniques that depleted mortals, exhausted the bodies of the builder's. This is a very straight forward Moon structure that actually proves ancient Aliens (at one time) have had a close eye on Human beings.
Is it a hub beneath the Moon chimney and is there anyone or anything still using it? My answer is yes because of the overwhelming evidence! Or is it a connected functioning base, or is it a base with a long ago, but ceased functioning system that could still be working... I ask because another one looked like it's still working as a camera caught smoke billowing out - fact!
The Moon origins BUT that's another fantastic story for another time.
And, can you explain how it become the Earth's Moon, how is it in a constant alignment with the Earth and we only see the same side every single night?
This is easy to see from the Earth, it's a bit of ancient history that anyone has access to. Wow, if you went through my published post's from over the last few years you'd find a ton of "out of place artefacts" or Ooparts for short and yes, all that shouldn't be there.
Every single month more ancient papers are put online, more ancient historic document's are digitally added to the list of human timelines. And believe me, it's all judged by one person's ability to guess the right age, to guess the right direction it fits in.
It's a case of "there's just no money to put into our digital effort" it's designed to bring humanity into the digital age. A reimagined unlimited data plan to the truth and facts. Yes, it's a total one sided buffet of delusional realms. But the simple act of scanning important papers, family timelines, time lines of the artefacts and even artwork including ancient Egyptian papyrus first hand testimonials from Tutankhamen, hidden away from the public with cross referenced journals from the actual day. Omg it's all there for anyone else who wants to put facts to hi-story and the facts are there. Just think of modern day terms, ie if there's two witnesses to an event of note. Your going to go with the , memoirs and infact "monumental celebrations of humanities biggest discoveries".
Here's the understatement of the decade, it's an undeniable, unmistakable, blatantly obvious - intelligently distinguished and intelligently created structure on the Moon!
That's a very hard set of word's to put together in one phrase or sentence. Oh but don't you worry about this because this video explains it all and in such a dynamic way that i should better than I ever could. and this video says all there is to say
Please like and share this post with anyone else that you think might appreciate it or even benefit from it? There's gotta be some people out there, that just might want to know more about this chimney and other strange looking Moon structures and anomalies? There's literally thousands of them, there's any number of cases for UFO researcher's to look into.
Credit: Secureteam10 YouTube Channel/NASA/UFO Sighting's Footage/UFO News/Ufosfootage/Canva.