Military Opens Up On UFO In Amazing Footage

Here's a video that shows a clear and detailed UFO sighting that had the military opening up on the aerial vehicle. These UFOs are real and a present.

This military UFO encounter happened over the Black Sea on September the 21st 2021.

Im always lost for words when a military UFO encounter takes place "especially one like this" because it could mean a few things which don't even bare thinking about! There's the possibility that it's just the beginning of a horrible war, there's a secret war with UFOs or it's just triggered something that prob zoom lm be . Mmably shouldn't have been... Credit: UFOvni2012 YouTube Channel/UFO Sighting's Footage/UFO News Ufosfootage/Canva.
I mean, we all know what would likely happen if one military was to fire upon another nation's military, right? The outcome would not be good for anyone involved and that's a fact that we can all agree on! The fact that this UFO was hanging about in the sky for long enough for the military to take aim at it, well that say's to me that these "Air Force" or Army and perhaps even the Navy are trigger happy guys and should definitely back off! For real, im asking nicely as a citizen of the UK. You should hold hold off for longer! I wanna say that the military are studying the UFO sighting in this post, but like all UFO action, it's subject to review upon which the info is way to late to be used? Even this video might yave been part of the bigger picture, but it's been a long day so who knows? Because the UFO was in this particular place, it activated an alarm which must have activated the camera and that's why we have such good camera footage? Either way, this is fantastic UFO news for everyone.
This UFO sphere video is bananas, it's one of the best examples of the military opening up on another species that's definitely here on Earth, but without anyone's say so, they're here without us knowing what they're doing? That's enough to get my back up, and it should be enough to get "your" back up because enough is enough! Just because we all assume that it's Extraterrestrial entities, and the clear fact that the video shows us something "an Unidentified Flying Object" surviving a military barrage of lead, it doesn't mean anything until we have the eye witnesses come forward and gove us their own insightful testimony. 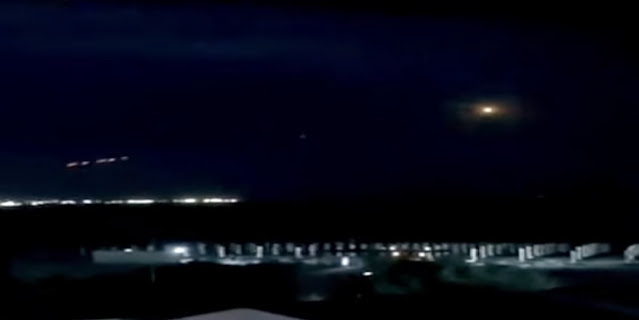 Credit: UFOvni2012 YouTube Channel/UFO Sighting's Footage/UFO News Ufosfootage/Canva.
Related post
Guy Films Black Triangle UFO Over Chicago And Fears For His Life
What would be the right outcome for learning about this encounter?
Just because we all asked for and received answers because we are the inhabitants of this planet, we are the people who are all in the firing line because the powers that be have got their own bunkers to go to. And they really do have a bunker to go to.
Here's the magnificent UFO encounter in all it's epic glory, the military UFO Sighting's are by far the best UFO sighting's that there is out there because of the nature of the situation:
Please share this post with anyone else who you think might appreciate it, cheers.
If you could check back here on a regular basis, I'd appreciate it. I'm always posting UFOs and Alien sightings but mostly it's about ufos and ancient history with Alien influences. Thanks for stopping by, UFO Sighting's Footage.
Credit: UFOvni2012 YouTube/UFO Sighting's Footage/UFO News/Ufosfootage/Canva.