I was contacted by a guy who found a triangular shaped UFO actually on the Google Earth app. It's a really good UFO sighting and it's not a hoax UFO.

This is the only evidence I'd like to have everyday of the week if I'm being honest with you because it's indisputable, unbelievable, real and it's definitely not been tampered with.

Google Earth, nobody has access to the JavaScript Earth engine software and display it in a hoax kind of way - especially on the live app version! 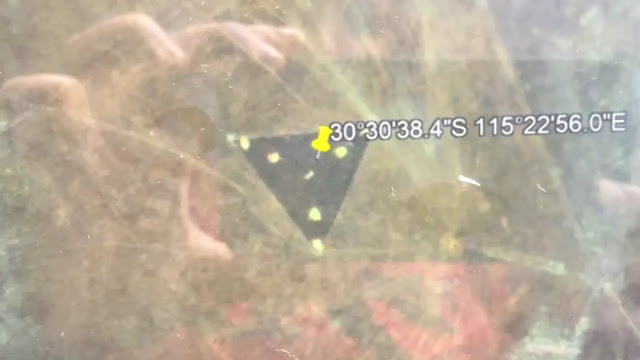 Someone would relish the idea of drawing a huge cartoon sausage where Spain should be. I think you get the idea of what people would do with it if they could literally change Google Earth to reflect whatever they wanted it to be at the drop of a hat? Google would have to employ an army of engineers just to keep up with putting things back together or back to how it was in the first place? So I believe that nobody has been able to do that because it's protected software and probably protected beyond your wildest dreams!

Okay, I'm mentioning the security credentials of Google Earth/Maps because I'm basically trying to say that this is real. Which it really is real because hoaxers and faker's of UFOs can't get any access to embed a fake photo with it's own fake coordinates as it's not set up like that.

Here's the coordinates and step by step instructions to see it:

I believe that some mapping apps are open source, but still people can't change the software and display whatever they want to.

Here's the epic video of the triangular shaped UFO spotted in Google Earth:

If you have any thoughts on this or any opinions, please share it with us in the comments section below, cheers. Also please share this post with someone who would appreciate this, thanks.