Alien Base Discovered on Asteroid By Japanese Jaxa Space Agency

The Japanese space agency Jaxa, sent out a satellite called Hayabusa to go to an asteroid Itokawa and it caught an Alien base on the asteroid.

This is the Extraterrestrial evidence we're always looking for because if it's possible and feasible then we would always want to bring it to your attention.

We kinda knew about it, we just wasn't to sure about the full story until now.

Alien bases in space are about as many as 1 in a Trillion, but that's an odds I'll take as it only takes one to be real, right. Jaxa is the Japanese equivalent of NASA and they sent out a satellite "right out" like 2 Billion miles away to check out this asteroid, not the one next to it or further away or before it, it was this specific one.

While nothing, absolutely nada, nowt at all separates this boring looking asteroid from any other asteroid in space I have to ask "why this one" but I think I already know the answer...

It's because an Alien presence has been detected there just like this base (see below image) which wasn't there when the Satellite turned up, but then it just appears from nowhere. Did you know that Jaxa took over 1500 photo's of this asteroid but just a fraction of it have been released? I'm not suggesting that it's unusual, I'm suggesting that it's downright bizarre and probably is a cover up.

Let's go for a 2 Billion miles journey into deep space, take over 1500 photos but only release a few when we get them. That's definitely not a plan of action, but it's exactly what happened. So yes, I'm suggesting alsorts until we get the full amount of photos and videos released with time stamps and other stuff to back their validity up.

Here's the before and after photo's from Jaxa itself: 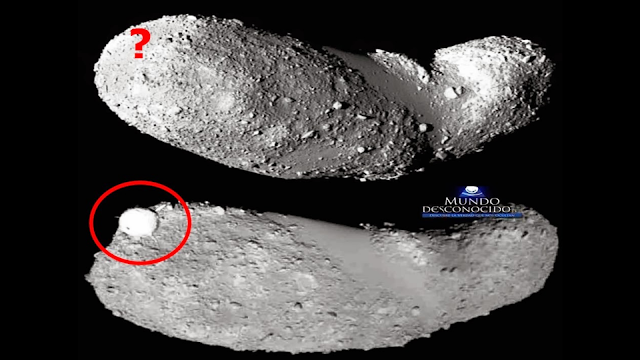 The above photos when put together one above the other, we see a blatant discrepancy on the bottom photo. There is a huge dome on the area of the asteroid at the front of it that's now got a dome there. There seems to be some tunnels in white radiating out from the central dome. Is this leading into the asteroid or are they support for the dome?

Lot's of questions but we've been denied the answer's in the form of the rest of the photos and videos of the asteroid Itokawa 25143.

Here's the video of this amazing discovery from Mundo Desconocido. Guy's check it out for yourself, it's a great video with convincing information:

In 2003 the Japanese probe Hayabusa was launched with the intention of photographing and analyzing the asteroid Itokawa 25143, during the taking of images of the probe, a photograph shows us a strange spherical object of apparent large size, later photographs show said free asteroid of that spherical formation.

The AJAX (Japanese Space Agency) seems not to deliver more photographs to the public that can unravel the mystery, despite the 1500 shots taken, only a small part of them are made public.

What is that strange object ...

Perhaps a non-terrestrial base that uses asteroids as platforms or stations for some unknown purpose? Why did Japan select said asteroid? Perhaps they had previously observed an anomaly?