There's a load of bizarre cloud burst's filmed happening around the world and side by side they look like sonic booms or some sort of pulse engine burst's.

There's no information with the video but it exists so I'm going to try to figure this out, not so much about where it was taken or who took the video but instead let's just try to get to the bottom of what's actually going on here?

It could have been shared anonymously on purpose for all we know because the eye witness doesn't want trolling. Seriously, as sad as it is, that happens to some people just for sharing a UFO photo or like this, a cloud anomaly. 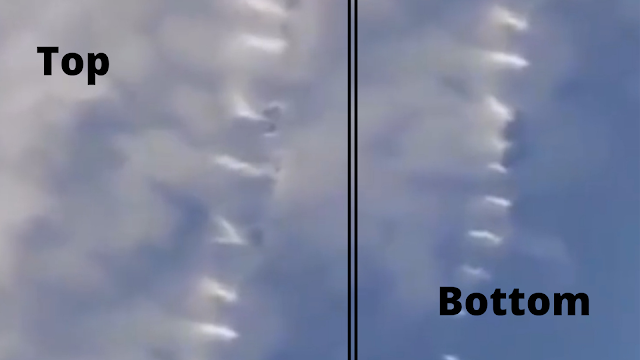 Credit: UFO Sightings Footage Instagram/UFO News/Canva/Wikipedia/Evolution Tree.
But it's also got a distinct effect which to be honest with you, I do not believe for one minute that these cloud anomalies are naturally occurring because they have a repeating system going to them and nature although precise, this doesn't happen and that's why astronomers and scientists look for repeating patterns because they don't occur naturally.
Below is the full sized photo of the cloud's being almost stitched together with an unseen string. It looks like a large squad of Air Force Jets have gone overhead and all of them went sonic all at the same time and all in a row.

Credit: UFO Sightings Footage Instagram/UFO News/Canva/Wikipedia/US Air Force.
In fact I'm sure I've seen something similar to this air burst before? I'll find the image and I'll add it to this post right here when I find it? 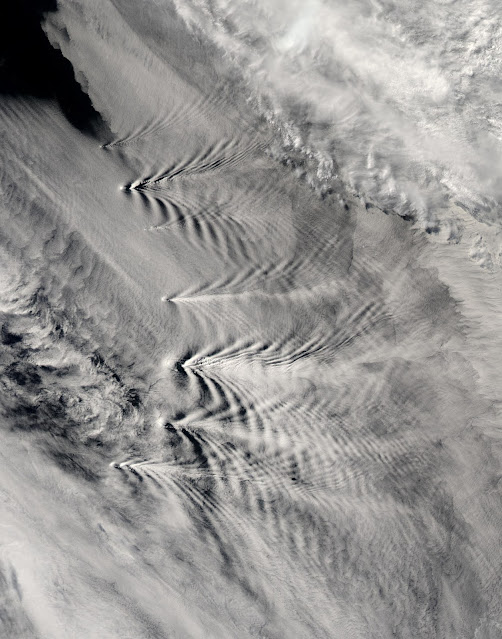 If HAARP is responsible for the image below then you best believe that HAARP could be responsible for the cloud burst's in the screenshot at the top of this post. HAARP has been suggested by a lot of people to be able to create wild fires, rain really, really bad in places that could do without it and on the opposite end to that it can take away any weather whatsoever.
Is HAARP a weather weapon? Is HAARP a multi linked project that can tip the ballance of power in an all out war, yeah probably. Can HAARP be used for good or bad, you better believe it can. Is HAARP responsible for the strange air burst type cloud anomalies in the main image, I'm not to sure? 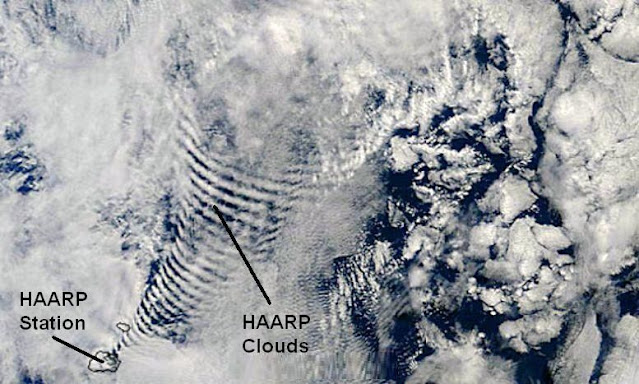 Credit: HAARP/US Air Force.
I've noticed a lot of these being filmed in the US with conspiracy theorists (I suppose I'd be one) bringing these to the attention of the public. I'm actually going with the HAARP High-frequency Active Aroural Research Program being responsible for the burst's of smoke or steam or whatever it is that's in the shape of what looks like a Jet burst but the thing is, there's loads of them and they're all side by side... that's the oddest thing ever.
Quote:
High Frequency Active Auroral Research Program. It is the name of the facility in Alaska that conducts research for the US air and naval forces and has all kinds of conspiracy theories about it. Their main purpose is to provide intercontinental communication, that America really has an army on every continent, to examine the ionosphere layer in the atmosphere layer (valid for meteorological purposes), to disrupt the signals of the enemy.
Apparently Nikola Tesla was behind all of this kind of research (HAARP) and that he laid down the basic fundamental principles. As soon as he died Nikola Tesla's own nephew - I believe it was, he was the very first person to go into his many safes in his room and he removed specific piles of research and books (handwritten book's by Tesla) and he even left the country (US) soon after carrying those very important, historically important, important to mankind documents and book's. This is when the authorities went into his room and confiscated what was left but by no means was they the first! Contrary to public opinion of course. 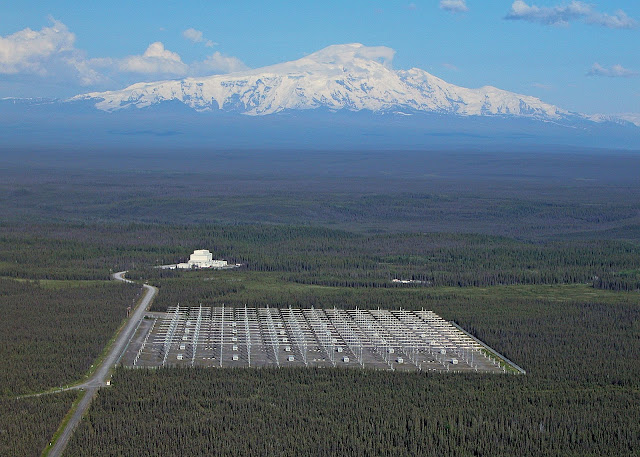 Here's an interesting quote from the HAARP's chief scientist and from the UAF website itself:
U.S. Air Force photograph (above). The High-Frequency Active Auroral Research Program site, Gakona, Alaska, is pictured with Mount Sanford in the background.
The High-Frequency Active Auroral Research Program doesn’t do anything ominous, despite what people say on the Internet, according to Bill Bristow.

Credit: HAARP Chief Scientist/US Air Force.
Here's the extraordinary video showing what I believe to be a HAARP weather manipulation of the clouds in action:
Please share your thought's and opinions also any ideas that you might have about this extraordinary cloud phenomenon, also please share this post, cheers.
Credit: UFO Sightings Footage Instagram/UFO News/Canva/Wikipedia/Kirkland Air Force Base/NASA Earth Observatory.