UFO evidence is caught on the SpaceX capsules cameras as a UFO flies past at some speed. The UFO video shows a definite UFO that should not be there.

This is not a of the light, it's not a piece junk drifting through space (best guess) and it's certainly not a joke.

Debris of this size is definitely mapped "always" and at all times and is under observation with it's location been known at all times. Just remember that when you see a blurred UFO whizz past the ISS or SpaceX capsule either NASA doesn't know anything about what it's claiming it's mapping software does with the close collision and positioning blah blah blah or this one UFO has snook on right up there through the net so-to-speak and given them food for thought but I know what I'm putting my money on. 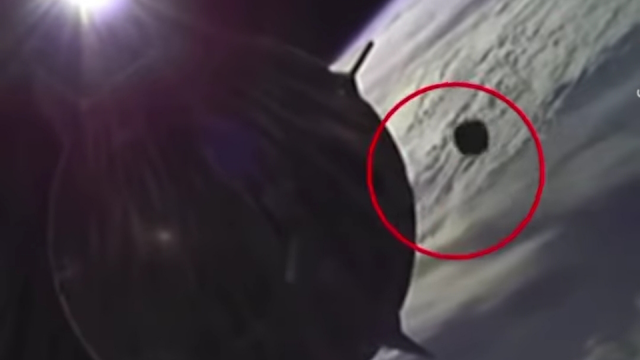 Credit: SpaceX/NASA/UFO Sightings Footage/Canva.
It drifts right on by the SpaceX craft and it's almost as if it's making it's presence known on purpose? The last time I saw a UFO this close to a "SpaceX vehicle/rocket" was when it blew the thing up and Elon Musk tweeted about it asking if it was responsible for the devastating explosion?

Credit: ESA.
Above is a Gif showing us what NASA’s supposedly keeping track of and this ESA tracking and positioning software is up to date "to the minute" in real time mapping. So, sorry but should all the ISS UFOs be gone through and looked at again because according to NASA, they should know what every single one is? Right... And that's by their own admission to.
Didn't he say that he was going to look into it as well? So, they're definitely getting the attention of the powers that be, that's for sure. I'm not sure if Elon is the powers that be but in terms of influence in the space realms, he's got some swing.
Related post
White UFO Inches Away From The ISS
Structures in space are often written about and known about in the future because these space rocks, strange space junk and debris are supposed to be mapped and plotted in charts and graphs with research into the near collisions and the probability of a collision and eventual touch down are already known in advance. But what's not publicly mapped or publicly available information is the Alien crafts in our immediate space and the UFOs.
So, I think this one wasn't in that database because it would never be allowed to come so close, they'd be steering clear of that "space debris" for sure, so it's not a known problem. That makes me think it's an uninvited guest in the form of a Alien craft.
This link is about space junk on Nature's website. Also there's NASA’s (ODPO) Orbital Debris Program Office which is helping to sort out this problem.

Credit: NASA ODPO.
Here's a quick quote from Nature website:
On Monday 2 July, 2018 the CryoSat-2 spacecraft was orbiting as usual, just over 700 kilometres above Earth’s surface. But that day, mission controllers at the European Space Agency (ESA) realized they had a problem: a piece of space debris was hurtling uncontrollably towards the €140-million (US$162-million) satellite, which monitors ice on the planet. (That shows NASA is actively tracking space junk). And whatever else strays close...
As engineers tracked the paths of both objects, the chances of a collision slowly increased - forcing mission controllers to take action.
Alexandra Witze, Nature.
Like I said, NASA’s got a very good, up to date space debris database or so they say. This must of been so fast in getting to the point where we saw it that it never even registered on the satellites detection apparatus which begs a couple of questions...
Either the whole system for the detection of debris is flawed, broken or not as described at all or this piece was able to evade capture by the detectors installed in the satellites monitoring the space debris field?

From small, insignificant thing's grow mighty trees. Some small, overlooked and trivial information could be the key between failure and success. The smallest detail is what can "and does" separate the bigger picture from the unnoticed smaller, insignificant action, linking both takes one to be astute and have a keen eye.

Or are we seeing bona-fide UFOs getting past (with ease I might add) the so-called safety net. NASA has mentioned this database and active monitoring system to the world so many times. Is it broken? Or is this a one off? I have to ask this because it (the UFO) came within inches of colliding with the SpaceX spacecraft.
Structures in space:
like the ISS and capsules, engines, cameras and reusable rockets drifting back away from the spacecraft. There's nuts and bolts, debris that's got away from the astronaut while working on the outside of the ISS for instance. But every now and again we have a gatecrasher like this amazing UFO Incident which happened with the SpaceX capsule. and yes it's got a huge UFO caught on camera by NASA who just so happens to be in the right place at the right moment a UFO is caught dead center of a photo.
The satellite that took the photo must of been linked to the Earth or it is a coincidence that as it was taking a photo of the Moon it just so happened that a UFO wondered by right in the middle of the photo been taken?
I don't believe in coincidences or anything that says uncanny things do happen because it was it's destiny or it was meant to be.
Credit: SpaceX/NASA/UFO Sightings Footage/Canva.
Everything happens for a reason!
Lee Lewis UFO Sightings Footage
The best way to get any answers is to ask the right questions. NASA will answer your questions if you write to them. Guys, please leave a message with your opinions about what you think your seeing here, cheers.