NASA has a live stream via UStream which is always recording UFOs that visit the ISS. For some reason NASA astronauts don't react at all to the UFOs.

The International Space Station astronauts are so busy with the "experiments I suppose" that they can't even see a UFO outside their ISS.

I have no idea what they're doing in regards to the ISS experiments (who does) it must be more important though than the discovery of life in the universe? How is it though that we seem to get more footage of UFOs visiting the space station then we do of the astronauts fulfilling their obligated, scheduled experiments and tasks! Do you find that peculiar like I do?
Isn't that a bit weird to you, I know it is me. I think that's straight up bonkers but anyways, the unofficial story must be that the astronauts are there to welcome, greet or just offer them a cup of water at the side of the race track (type of service) or even offer a sort of repair service to the passing UFOs? 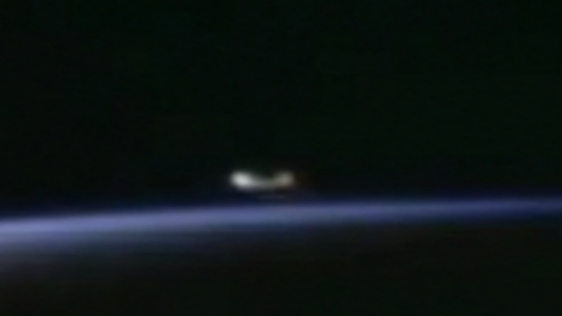 Close up view of the Silver UFO filmed on NASA's own live TV.
I say that because all these UFOs seem to turn up but NASA, Mr NASA doesn't even look out of the bloody window! They are paid to go to space and search for signs of life! If they can't even see one knocking on the International Space Station door then seriously, I want my money back. 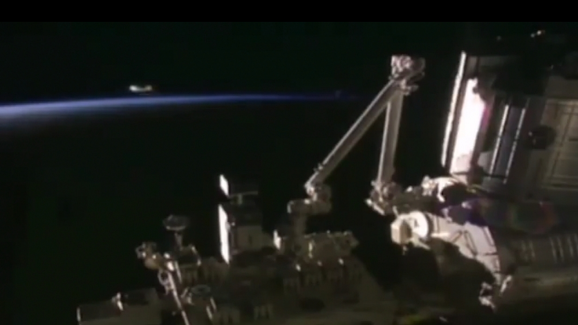 UFO recorded live - image from NASA live UStream TV.
Sack the head of everything and replace it with Ufology enthusiasts because I can guarantee that every slightest sign of life, UFO passing the ISS will be looked into "in depth" and straight away. Sometimes, scratch that - everytime I see a bona-fide UFO at the ISS and NASA not even looking out the window (it's really that simple) I get so frustrated!
Then the conspiracy theory starts to make a whole lot of sense that NASA, the US Government are in cahoots with Aliens to look the other way.
As crazy as it sounds, why else would they (astronauts and the live feed specialists) not even look up from growing noodles or spaghetti trees in the ISS and at least say "did you see that or I wonder what that was"?
So, without further ado, here's the brilliant UFO video. It's a very compelling Silver Disk flying right near the ISS, then it's flying away from the ISS at a very, very high speed. Please enjoy this video I've put together:
Please like, subscribe and share - thank you.
Credit NASA via UStream.
Credit UFO News YouTube Channel.