Wernher Von Braun wrote a book in the late 1940's while he was at a military base and he prophesized a man called Elon that will take mankind to Mars.

This is crazy, like major bizarre and strange combined with all the trimmings of a yellow submarine! But very satisfying and compelling.

I honestly don't know what to make of the so-called fictitious book wrote by Wernher Von Braun in the late 1940's? I say that because it almost seems like it's a tale but of reality, or as damn close to it that anyone without prior knowledge of, could ever write.
Was there an ancient but advanced civilization on Mars in the very distant past and did surviving Martians come here to Earth to seek refuge and did they pay the gate keeper (so to speak) with secret knowledge? The wonders of the ancient past would definitely fit in with this theory. So, we have to narrow it down even more, link things that could only be from an advanced civilization with links to Mars i.e this is why people are linking Pyramids on Mars with the ones here on Earth!
Is it all just one big coincidence? But remember, there's so many coincidences, lot's and lot's which in my eyes nullifies that theory.

Is Mars nothing more than a rock in space without any life ever existing there, or is Mars the stepping stone, the propagator, the place where it all began from and where all advanced knowledge spawned from? It was definitely important to Von Braun and it's extremely important to Elon whom is the name of the guy Von Braun wrote about saying that he (Elon) will take mankind to Mars in reusable rockets!
Mind blower or what.
So, I wanted solid evidence of this. I wanted to know if this is real or are the people who say it's fake or it's not true - are they correct?
Related post
Hovering UFO on Mars
OMG, it turns out that as hard as it is to believe, Von Braun was a prophet and he didn't even know it! It's all true. 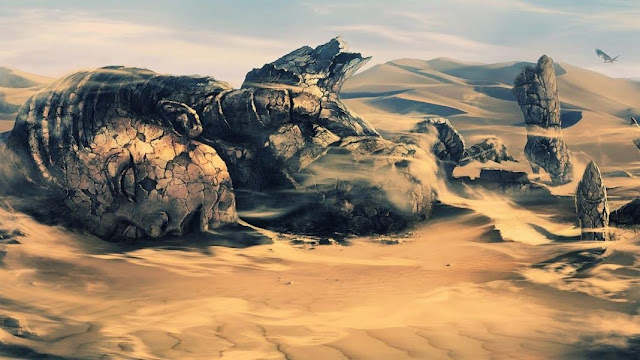 Mars concept, Google Search.
So, here's the story and what a story it is.
Wernher Von Braun wrote a book and in this book he says that a man called Elon will take mankind to Mars and while using reusable rockets, he will then become the head
Was Von Braun in communication with Aliens or was he deciphering a signal from humans in the future sent back using speed? Apparently going so fast, things go backwards. 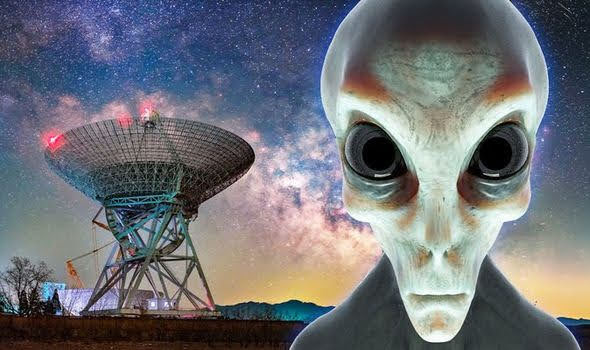 Alien contact and signal from the future from humans, Google search.
It's beyond coincidental because it talks of a man taking humans to Mars, a man named specifically as Elon, but also in rockets that are reusable! If that right there isn't a prime candidate for hidden, secret knowledge from the matrix then I really do not know what is?
I'm been serious here, is this time travel (not physical time travel but sending signals through time and space, dimension, energy if you like). Or is it a matter of decoding our human DNA where everything is stored and discovering a repeated mathematic equation which is the template for everything. A code for example.
One code but to get different messages, you apply a different way of decoding different codes,?
Code:
ATAAGTTAAGAGTAGTTAGTTTAG
Can we determine the evolutionary process through different methods and can we determine where we're going i.e specifically just like Wernher actually did? Is everything that will be or ever be, just a case of deciphering DNA with mathematics and has it been achieved in the future? If not, answer me this: How was he able to be very, extremely accurately in his "fictitious book" call the call Elon which is not a common name at all? There's no way on this Earth that all the accurate things said was one coincidence after another! No way on this God's Green Earth! Wernher wasn't a prophet so this must of come by other means and that, therein, lies the mystery...
Where did he get this information? Don't forget this was late 1940's so why did Von Braun get an unlimited free reign from the Nazis and then subsequently from United States? What did he know, what was he able to say because that's all he had was his words and then be able to get off scott free from one of mankinds worst atrocities which he utilized as forced labourers and he never ever, not once said sorry for!
Is it tapping into the realms of innate abilities (is that what he could do) or is it Alien interaction where they gave him (Von Braun) visions and secret knowledge to convince people with or quite literally could he see into the future and have shared the knowledge with the Nazis and then the US Government. It was a race to round up the scientists after the second world war.
Let's be honest, it was a race to Get Von Braun "only" and here's why I know that, please, if you will - can you name me the other people that the US and the UK plus Russia was trying to round up? EXACTLY!
Or was it just because he was the most technically savvy human being at that time regarding rockets and what it will take to deliver a rocket into any country was all knowledge but stored in his head?
If he gave them it on paper, they could get rid of him and his "horrific beginnings" and attribute the knowledge to someone else? So, keeping all the knowledge in his head would safe guard him and his chosen few?
Now that, while not verified or even contemplated by many isn't a fact, it definitely fits the answer perfectly as if it where a glove made for his grubby little fingers! I say grubby little hands because I do believe he has blood on his hands and for not apologizing (the least he could do) he is forever open to the harshness of peoples opinions throughout the forever time. It's the least we can do.
If Aliens know the future, that they've somehow cracked the code that is the future - it stands to reason they know the past so they would know whom to talk to, whom to implant knowledge, whom to bestow or depart the sacred knowledge to and yes, it is sacred knowledge.
It's knowledge of the future, it's knowledge only available to a God or God like entity so it must be sacred but only if you subscribe to this notion! If not then it's just a code to crack by anyone and it's open to anyone because it's a race. A race of knowledge and "the truth will set you free" but from what? This burden of reality, all the pitfalls and the worries, the strain, grief and pain of seeing your loved ones die.
Maybe, who knows, right?
If you think it sounds crazy, I agree lol. but, just read what Von Braun wrote, he wrote about Elon, about taking mankind to Mars (not Pluto, not Venus or Uranus but Mars). So, please before you start to resort to your default setting of sarcasm, dismissal, rejection and to poke fun at the crazy person writing bizarre and crazy things. Just remember what he wrote and accurately I might add and what he prophesized! Please.
Results of what I have discovered might be way off but then again it's 50/50 because it's either correct or incorrect... 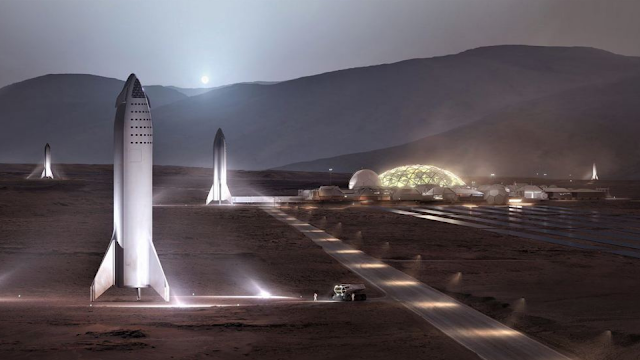 Artist's impression of SpaceX's proposed Mars Base Alpha. Credit: SpaceX.
There's just no way that Von Braun knew Elon... He died in 1977! Elon was a kid at the age of 6yrs! Von Braun wrote this book in 1948. 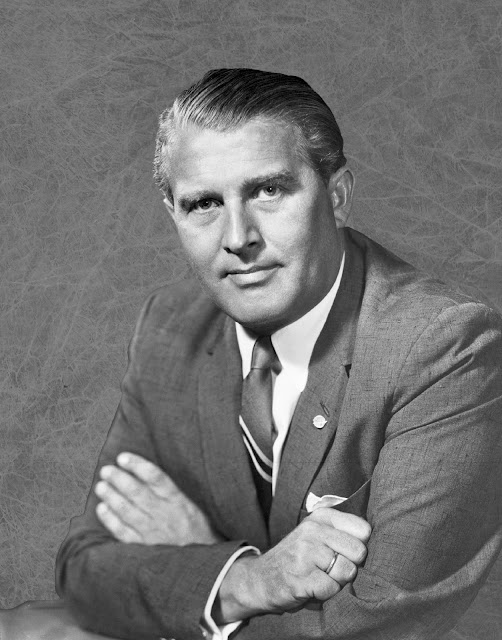 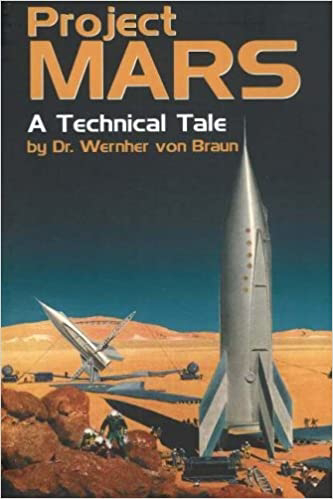 Von Brauns book Project Mars.
So, wtf is going on? If your wondering why Von Braun and Elon are been talked about here - it's because Von Braun prophesized that a man called Elon would take mankind to Mars and will become the Head of the colony on Mars!
This is from Von Braun'sown book which I have found, and found the original script for the book. People said this is a myth and that Elon is not even mentioned in this book but I'm here to set that record damn straight with a link to the prophecy book that is "Project Mars A Technical tale". The book first published in 1950 and subsequently in 2006, 20th October.
Check this snippet from an article I read (all links are at the bottom of the page also).
Before German-turned-American engineer Wernher von Braun was conscripted to build rockets for the Apollo project, he published a short book in German, "Das Marsprojeckt" (later translated to English). It envisioned reusable rockets!
Does it sound familiar to you?
Reusable rockets, it's possible that we are witnessing nothing more than a coincidence? But then it gets more Simpsons than Simpsons could ever get! It gets to specific for my liking, and I do not believe in coincidences - at all, forever, full stop. No such thing.
Aliens are watching humanity and we're not smart enough to realize it, YouTube video by Close Encounters UFO.
So, here's the father of space travel Wernher Von Braun writing a book called the Mars Project and in it he names Elon as the man who is going to take mankind to Mars in reusable rockets, head a colony and introduce us to Aliens. If you're starting to disbelieve the end bit I'll quickly point you to the beginning.
Quote:
Weirdest of all, von Braun imagined a future Martian government in which the head of state went by the title "Elon." via Reddit r/SpaceX lounge. 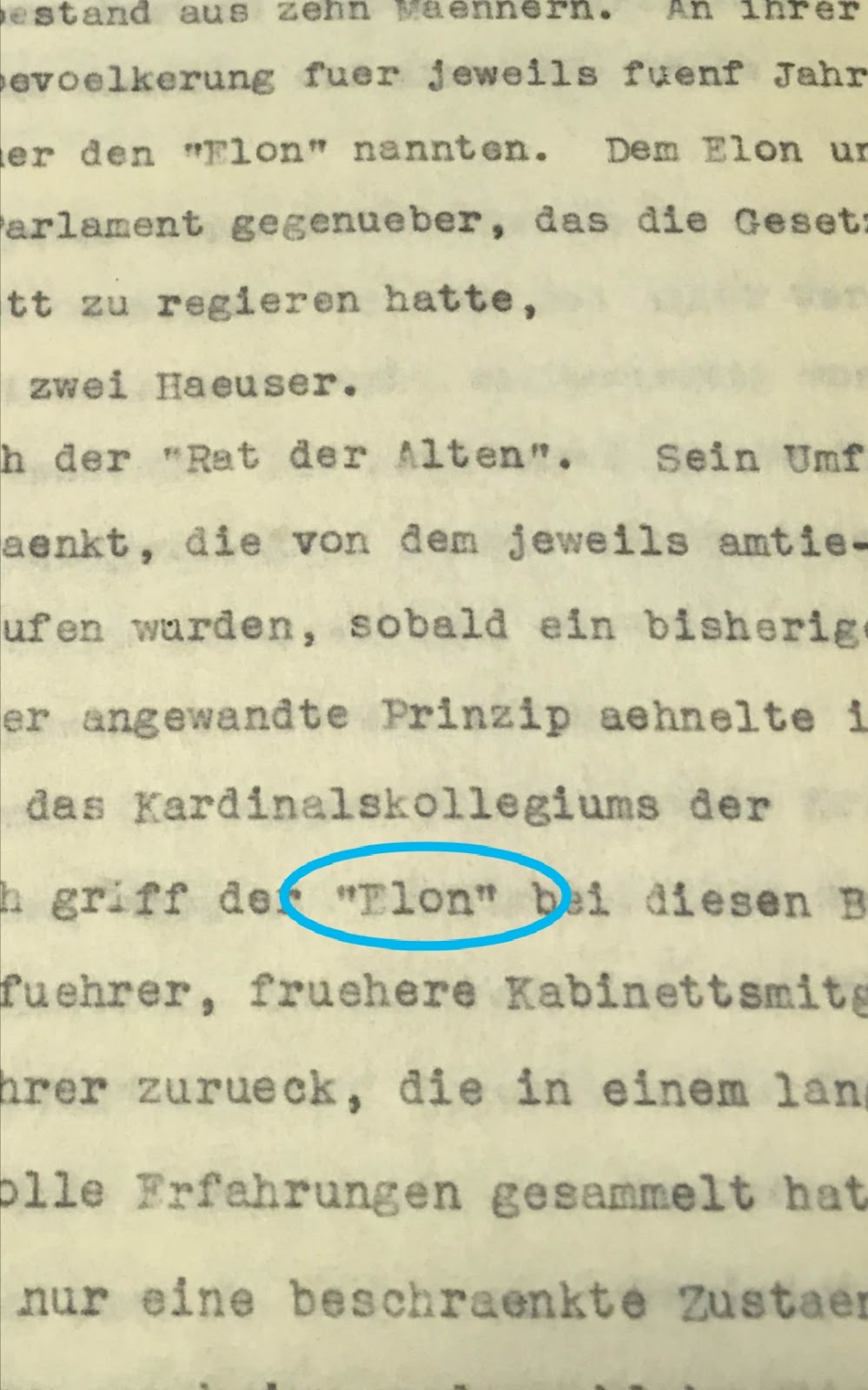 The original copy of the book Mars Project. Wernher Von Brauns own typed papers of the book Project Mars A Technical Tale.
How amazing is this guys! 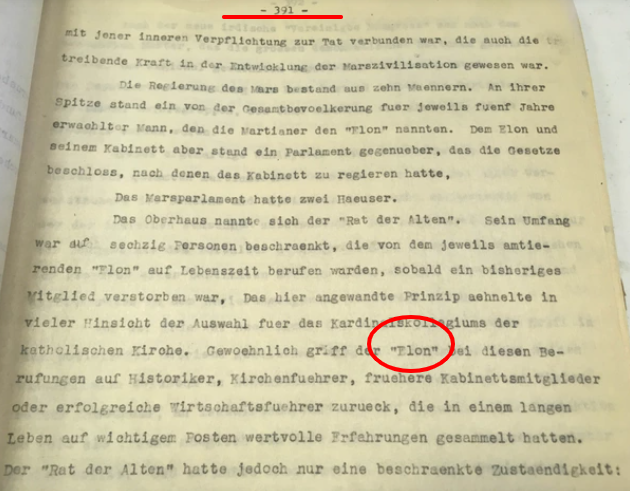 Credit Imgur Men Between The Planets.
Here's the link to that tangible evidence of prophecy, insider knowledge, time travel? Why did Von Braun say this, how did he come into possession of the knowledge of the future?
Source CNET.