Ancient Alien Elongated Skulls Not Human According To DNA Sample

Ancient Alien elongated skulls have been found. The Ancient Alien theory looks very good and right. Why some parts of history are kept from people?

An ancient Elongated Skull has been studied by an American geneticist and found to have no known match to any species that is known.

The DNA sample was taken from the ancient elongated Peruvian skull (where it was discovered) and was studied in the United States and parts of the sampled DNA from this unusual looking skull have been found not to be human. How big of a deal is this, I hear myself say "it depends on how you look at it" is my overly optimistic opinion. There's a few possibilities here; it could be a new humanoid species on the tree of life, having it's own branch. It could also be a mix up at the lab deliberately or by pure accident (it's certainly happened before. 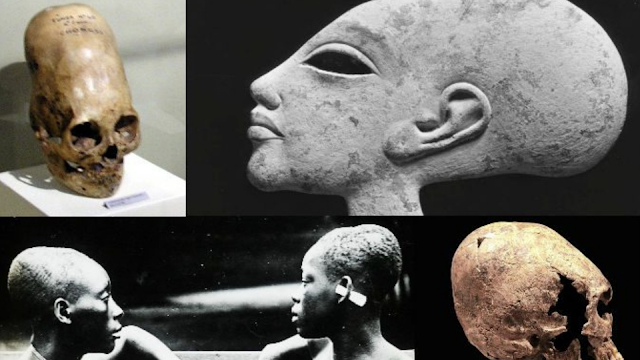 Top left: An elongated skull from Paracas, Peru. Top right: This is a female head and an elongated skull, and is probably from a child of the Egyptian Pharaoh Akhenaten (1351–1334 B.C.). Bottom left: Two slave girls from the Congo, whose heads have been elongated through binding at a young age, ca. 1900–1915. Bottom right: Elongated skull of a young woman on display at Yverdon History museum. (Wikimedia Commons)
Credit: The London Economic/Wikimedia Elongated Skulls/UFO Sightings Footage/UFO News/Canva.
Or it could simply be an ancient Alien "Extraterrestrial entity" of which this might be the reason why we have extremely bizarre looking and outright extreme skull features right before our very eyes! It could also be a human, Extraterrestrial hybrid. Yes, I said a "hybrid" and believe me there's a mountain of evidence to back that theory up and I'm not calling it a conspiracy theory because we have the skull. If there was no skull and it got lost or it was based on an ancient wall drawing then I'd refer to it as a conspiracy theory. I'm definitely going with the human hybrid which if you know me by now you'll have already guessed that this is my favored answer to the elongated skull.
Related post
Actual Physical Proof That Extraterrestrial Exist With A Real Alien Skull
It looks half human, half something else entirely. That's my rational for my answer. It doesn't need to be anymore complicated than that. Half human, half other entity because animals dna will not take to human dna. It cannot be spliced, cloned, half and half or hybridised. So I'm going with an intelligent species of Extraterrestrial and a human being coming together in equal parts to create this hybrid looking Alien skull. It makes complete sense, other than a genuine mutation in the genes. I don't believe it's head binding because there's way to much skull for it to be a normal skull but binded and as the human being grows it elongated the skull. There's no way that binding a human skull would actually create more growth in a skull, it would just be the same amount of skull, but elongated a little bit and not like this very long skull.
Related post
Head of NASA Bill Nelson Said That UFOs Could Be Alien Technology
There will, in a nutshell come a time when humanity or branches of humanity will need a survival strategy because of circumstances. There will come a time if we continue to colonise space, a time when humanity is at a junction. A crossroads if you like. We'll have one shot, surrounded with the technology we would need, we would have to seriously consider hybridization with another similar but different Alien species.
Here's the Ancient Paracas Elongated Skulls DNA Test YouTube Video uploaded by History Channel:
Description:

By testing the Paracas skull #44 that was discovered in 2012, some Ancient Astronaut Theorists believe they can prove that extraterrestrials walked on earth right among us in this clip from Season 10, Episode 5, "The Alien Evolution". #AncientAliens

If life is how I imagine it to be, that individual experiences between humans are a shared feature, all capable of doing the same thing like a common shared set of experiences and that these connects us. If one learns a behaviour, other humans learn it also but only if they're in a similar situation now or later on. The bow and arrow is a perfect example. People's separated by oceans all learnt to make the bow and arrows and the sword. A shared set of experiences. So why didn't everyone bind heads?

Brien Foerster, assistant director of the Paracas History Museum in Paracas, announced that a geneticist analyzed the first flesh sample from the skulls and found that segments of its DNA do not match any known human or human-like species from the past. The results are preliminary, and Foerster said he made the announcement to gain public interest, and thus funding to continue analysis on more samples. Though Foerster did not name the geneticist, he said this geneticist is in the United States, has all the right credentials, and does contract work for the American government.

Cultures cut off from the world have got their own bow and arrows that just appeared, stayed the same and did not evolve. That is a given piece of knowledge. Don't better it, don't evolve it and do not lose the knowledge of it. 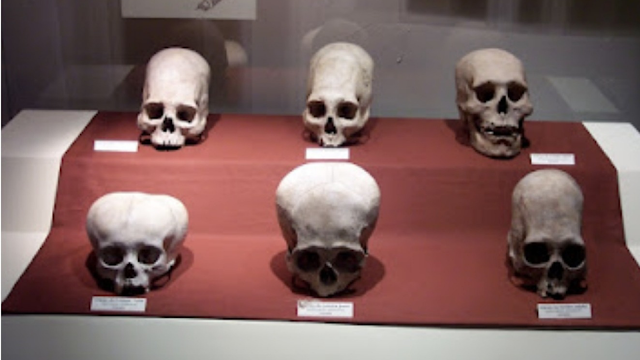 Credit: The London Economic/Wikimedia Elongated Skulls/UFO Sightings Footage/UFO News/Canva.
How do I know this? Because there's no early versions of bow and arrows. Theres no primitive types of bow and arrows like guns for instance. you can see how they evolved. Like vehicles of today. You can see the lineage. Also for example is the Sumerian Cuneiform writing which absolutely "just appeared overnight"!
It never evolved from anything and wasn't influenced by anything at all. Now it's not there and now you see it. It is one of the biggest mysteries in the ancient world. Cuneiform writing is the first ever writing system ever.
That leads me to believe that it was introduced. It was given to them. It was a gift from the Gods and when I say Gods I mean Aliens. Who knows what else was given to us humans, agriculture? Bread? Flatbread has just been discovered in Jordan from 14 thousand and 400 years ago! Which predates farming by 4,ooo (four thousand years).

I believe that our history is wrong, even if it is wrong and the proper authorities know about it, nothing will change because this is knowledge that the proper authorities know about and have had in their possession for years now but yet the same unchanged history (which we now know for a fact is wrong), is still being taught as a fact! It's actually quite naughty when you think about it and it's not as if it's a huge deal, because it's only a small detail, a small thing called lineage of the human race. So it's no big deal right?

Guy's our timelines are all wrong! This knowledge of flatbread may seem tiny and insignificant to some people but to anyone interested in the correct or should I say the historically correct human timeline, then this is massive. Check the link above, it's eye opening.
Here's a great video uploaded to YouTube by History Channel:
And the lies, they continue... What else does the "proper authorities" know about which is wrong? How many other titbits of information does these authorities harbour? What else could destroy what we believe is true? Because that’s probably how these people see it, that telling the truth will shatter the views of many people so it's better they don't know about it.

Foerester has taken a keen interest in elongated skulls and done much independent research over the years. He also said that 5 to 10 percent of the hundreds of elongated skulls he has seen from around the world (that's right, we are talking about a worldwide phenomenon) do not appear to be the result of intentional deformation. The binding techniques usually leave a flattened surface on part of the skull, but some of the skulls he has seen appear quite natural.

Please share your thought's and opinions also any ideas that you might have about this amazing Ancient Alien Elongated skulls theory. I'd also appreciate it if you could share this post with someone who you think would appreciate it, cheers.
Credit: The London Economic/Wikimedia Elongated Skulls/UFO Sightings Footage/UFO News/Canva.