This is a great UFO sighting because it's been broadcast live by the ISS and NASA. The Space Station has many cameras watching all the time live.

NASA must be hiding behind a huge amount of UFOs that people are detecting at the International Space Station through their own live feeds as well.

There's always something new and exciting with the evidence that is available for anyone who wants to look it up? The scientists that monitor the progress of the space walk's and the whole area outside of the space station. Literally anyone can go have a look and a lot of the time some people see real UFOs. 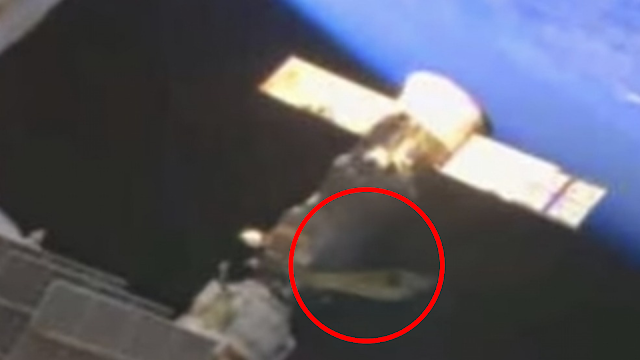 Credit: NASA/Unexplained Mysteries YouTube Channel/UFO Sighting's Footage/UFO News/Canva.
It's like these cameras are on, they're on a live feed, of course NASA know that people are watching the cameras and yet they still try to stop people from seeing the feed by cutting off the live feed and replacing the footage with a "blue screen" which is what it's become known as.
Related post
Huge UFO Flies So Slow Past The ISS Menacingly
There's always the same message which basically says we are experiencing technical difficulties etc and other reassuring messages.
Quote:

But please, you've got your own mind to make any sense of the stuff your seeing on the screen and what's been said or shown as a message which just so happens to be the same time a UFO sighting is going on?
Here's the brilliant NASA live feed with a UFO docked at the ISS video which was uploaded to YouTube by Unexplained Mysteries:
Please share your thoughts and opinions with us, there's definitely been some strange things that have gone on in space at the ISS. Also if you could share this post with someone else who you think might appreciate this, thank's.
Credit: NASA/Unexplained Mysteries YouTube Channel/UFO Sighting's Footage/UFO News/Canva.