Astronauts Photographed From Earth During Spacewalk Probably First Time Ever

This is a world's first photograph that shows us the International Space Station but with two astronauts actually on a spacewalk which looks amazing.

Here's proof for all the people who doubt that the International Space Station is not real, and yes, you better believe it that some people "really do believe it's a fake station."

This is going to go through history as the very first (amazing photo) taken from the Earth showing astronauts outside of the ISS during a spacewalk, what an amazing photograph this is. 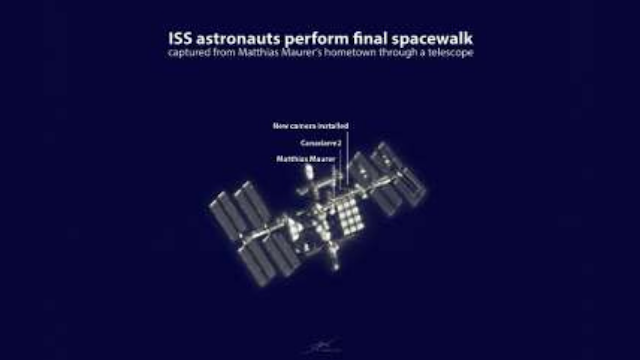 Amazingly, astrophotographer Sebastian Voltmer managed to capture a snapshot of the spacewalk action from the ground - and from Maurer's hometown of Sankt Wendel, Germany, no less.

Harvard Astrophysicist | Comet Speeds Up Passing By Our Sun

While they go about scratching their heads and gathering their shattered thoughts and now defunked belief's, let's just get down to the brass tac's and take a good gander at this absolutely stunning picture of which I do believe it's the very first by a private individual. 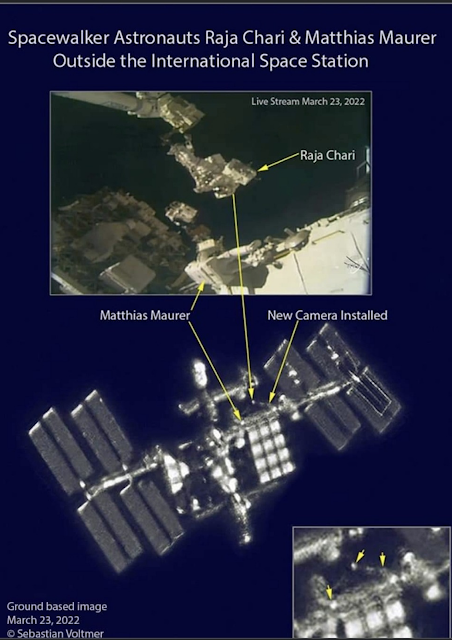 Instead of this photo been produced by an official agency like NASA it's come to the publics attention via Sebastian Voltmer. I mean, there's not a lot of "world's first's" left to be had right, but somehow people keep finding them.

I'd personally love to create this world first because it's something that everyone would like to do, plus it's so appealing just for the gravity of what's going on, what it represents and obviously there's the hostoric value to it.

During the spacewalk of the two astronauts Raja Chari and Matthias Maurer the International Space Station appeared shortly after sunset in the bright evening sky over Germany. This image of the ISS pass was taken on March 23, 2022 under good seeing conditions through my C11 EdgeHD telescope from the hometown of ESA astronaut Dr. Matthias Maurer. The docked SpaceX Dragon capsule, with which the astronauts of Crew-3 flew to the ISS, is clearly visible. Three years ago I got to know Matthias Maurer at our SpaceStudio (Weltraum-Atelier) in Nohfelden, Germany which is located near to Matthias‘ hometown which is Sankt Wendel, Germany.

Additional funfact: I produced the song for his ISS mission, "Cosmic Kiss”: https://youtu.be/tQYysJw7W_s

Here's the really good video of the music:

This is actually a really good video, you'll definitely like it.

For the local press in Germany, I first published an initial photo highlighting where Matthias Maurer appeared on the ISS. Due to my time constraints, I released this version right away on the internet, which then went viral, while I continued to work on the final image version with both highlighted astronauts. Already two days after the spacewalk happened, Philip Smith contacted me. He is a world well-known photographer of all things ISS and has been published in many forms of media.

Philip Smith with his ISS obsession, noticed on my picture that NASA astronaut Raja Chari is also detectable - on the robot arm “Canadarm2” - and he created a wonderful combination picture shown here with an insert from the NASA livestream: https://youtu.be/uZqaTsbDcgU

I feel like I just made a once in a life time image :) It's probably the first ground based picture showing two spacewalkers on the ISS at the same time.

Here's the epic video of when the spacewalk actually took place and Sebastian Voltmer took the once in a lifetime photo:

Now I know that you will know someone who would appreciate this post, it's a world first spacewalk on the ISS, that was actually photographed from the Earth by Sebastian Voltmer. Also, could you share your thoughts and opinions on this, cheers.