What The Heck Was Caught Coming Out Of Bidens Sleeve

President Bidens sleeve had a really strange thing popping its head out of it. What's the deal going on here? Is it a communication system for agents?

I'm not sure what is going on here, it's not a piece of CGI or computer trickery but it looks like a metallic rod or microphone which is a no no during a live debate.

Let's start with a quick quote from USA Today:

In the video shared on social media, it looks like a dark line appears on Biden’s white shirt out of nowhere. In a more high-resolution version of the video, it’s clear the dark line is a crease. It first shows up at the 1:09:37 mark, after Biden adjusts his jacket. After a few seconds, the wrinkle melds back into the shirt.

What about a microphone on his wrist? It’s much more likely that object is a rosary.

So why are people at USA Today doing a "fact check" when it's clearly an just their own opinion check and yes, you best believe that it's USA Today trying to stand above everyone else shouting "only our opinion is the truth!" Because let's face it, it genuinely is just an opinion based on their eye's versus what other people's eyes see and how it's interpretated. We really shouldn't lose sight of that (excuse the pun) because when USA Today adds the "fact check" phrase to this story, I kinda lose all respect for this news agency. Because it's a really unfair attempt at swaying people's opinions because they've got a wider audience and that's not cool. Check this link. Please look for this "fact" it's in there.

What social media users speculated was a microphone on his wrist was probably a rosary.

Oh wow, seriously! Their fact check is literally the above quote! The word probably is now masquerading as a fact check. I'm absolutely flabbergasted because people get their fact's from this. They supposedly reached out for a comment but didn't get 9ne from the Biden campaign (at the time as this happened in 2020). People are supposed to be able to rely on news agencies? I always state clearly (even on my websites) that all expressions, comments and opinions are mine own and I won't tout my opinions as a fact check because I really don't have that duty, nobody has. It's all just opinions "especially in this case".

If you want to see what a fact check looks like, just read the Related Post title link just below here regarding Buzz Aldrin admitting to a UFO following their craft. That's a fact check, straight from the horses mouth!

I'm pretty sure that this has to be something to do with the Secret Service or his personal security (at the time) handling Biden? I'm also very confident that Presidential election TV debates are supposed to be microphone free, right! Isn't it supposed to be honest and straight from the heart instead of straight from the advisors waiting in the wings and the audience? It seems totally unfair to me that Joe Biden wearing a microphone is allowed, he should have been told to get the microphone off because it's cheating. 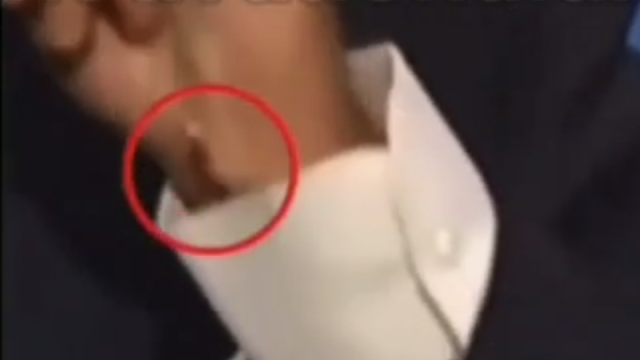 It's their gadget's or some other type of object which helps his security service with his location and allows them to know where he is and probably stay in communication with him? Okay it's a massive leap but it's not the bead type gift he tried saying that it was. This thing as you can si in the looped video, this thing blooming popped it's ugly head up then retreated really fast. Look I get how strange it sounds, so I invite you to explain exactly what you see here in this video! Go on, explain what you see and I'll judge you on how strange you sound.

The Most Detailed Head Surface Sculpture on Mars You'll Ever See

It could even be a soundman microphone - but because it's a live TV debate with Trump, this is a absolute no no! He can't have someone in the audience or in the wings telling him what to say, that'd be cheating and can you imagine how well that would go down? But because he is on the TV he's supposed to be himself and talk from the heart so if people knew he was been told what to say, omg he'd be sidestepped by voters immediately? 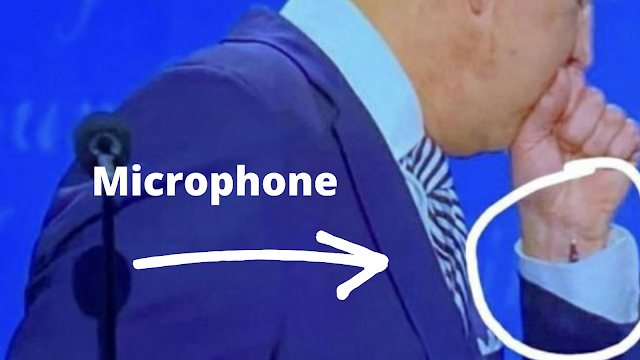 I'm not going to buy into the evil snake charmer train of thought (which is what this funny narrator says) or that he's secretly a cyborg lol. I'm pretty sure that Bidens a real person. It's certainly something that is definitely there inside of his sleeve though. It really does seem to pop it's head out - but then as quick as a flash it's popped it's "head back into his white privileged sleeve"...

Silver Flying Saucers 100 Percent Recovered | But It Was A Hoax

I never thought I'd write anything like that about the President of the United States having a snake type object up his sleeve! It's as if he's like magician David Blaine or Dynamo (from the UK) forward slash and or Derren Brown, lol. If your an aficianado of white collar shirts with pencil snakes then please, I beg you, actually I implore you to get in touch with me and put the record straight regarding wtf is going on inside of the presidential sleeve!

Here's the extraordinary video, actually it's a bit funny in parts when the narrator says that Bidens got a huge snake.