NASA has had the Apollo 11 taped recordings hidden away and somehow they think it's no big deal. It's our biggest achievement and they covered it up.

Did you know that NASA has released over 19,000 hours of radio communications between the Apollo crew and mission control?

These recordings have apparently been sat for 49 years in a vault at NASA without anyone touching them, listening to them or even knowing about them? That's complete lunacy if you ask me because I think that historians, museums, institutions and most importantly the people of the world need this stuff.
They are available here.
The Apollo 11 Moon Lander touched down on the surface of the Moon on the 20th July in 1969. 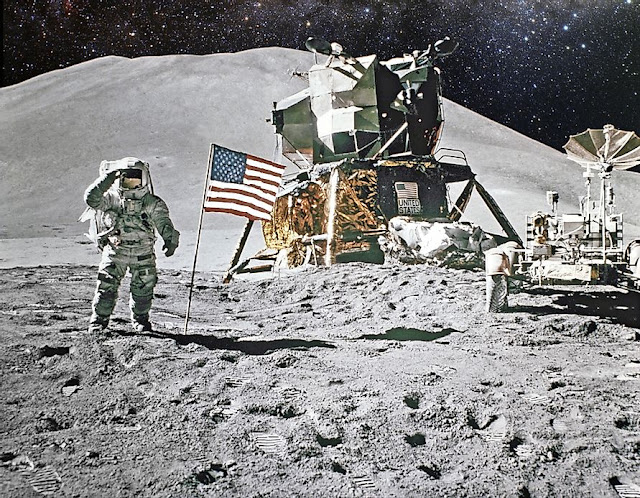 Credit NASA.
Or did it? Has it lost the tapes, has it had the tapes in a vault or was they recorded over? Seriously it's confusing and I do know one thing, they were secret!
I mean, it's only the most important mile stone in human history here, it's only (I say sarcastically) humanities only evidence that we actually became an interplanetary species.
When I put that I got chills, I still can't understand the rational (if one was put forward) as to why NASA needed to store them under "forget about it"...
------------------------------------------------------
Random anomaly. 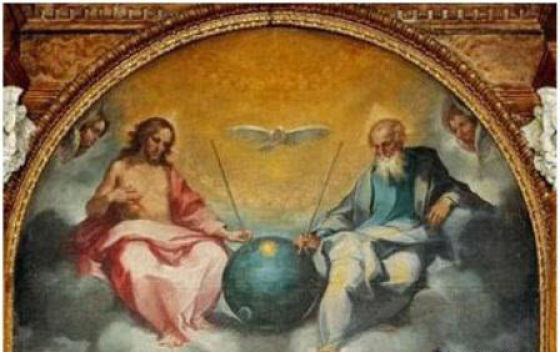 Credit: "Glorification of the Eucharist" - painted by Bonaventura Salimbeni in 1600.
Okay, someone please explain this to me? I've randomly added it because I can. Why not? It's absolutely 100 percent proof that there was antennas and radio around when this ancient artwork was done.
---------------------------------------------------------
The fact that we haven't been given anything by way of new communications, videos, new information for decades means that these were probably and deliberately hidden away? Stashed away for a better word, right?
Seriously, I went to the Apollo 11 site where the recordings are kept and there's an image on that page of an astronaut stood looking at the flag with the lander in the background. Check out the huge anomaly in the sky! It's prob's already been found but it's awesome: 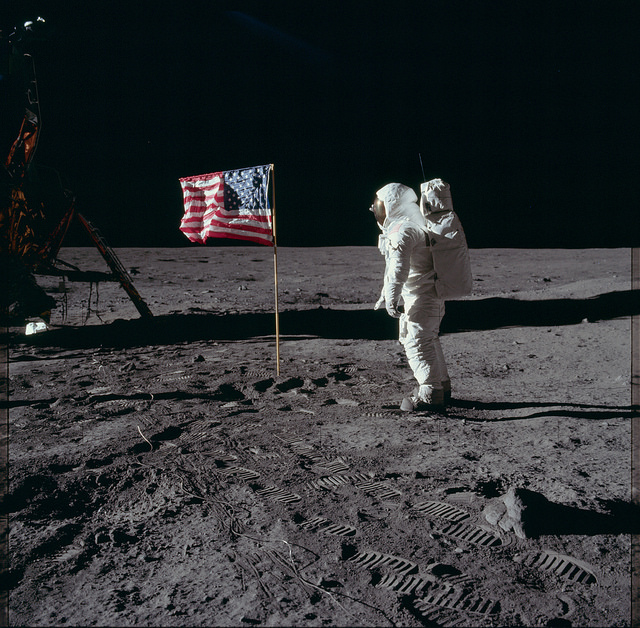 It's there, a blue cigar like object.
The conspiracy theory literally writes itself there. It literally points in the direction of a deliberate act because something was or is on the recordings and if released either with it included or without it then it would bring up unwanted Alien questions. If they took away the piece of recording, it would be noticed and if they left it in, well then it would be damning.
That's all speculation, but why else would NASA keep locked away the audio from mankind's biggest achievement since the Pyramids? In fact this is even bigger than that! Yet it's at one point part of it was recorded over or wiped! It's insane is what that is because you do not record over something like that unless it's deliberate.
It might sound cute and funny but there's even an audio clip of Buzz Aldrin asking mission control to turn the Earth around for a better view? Mission control says back in what sounds like code "we don't have control over that, you'll have to settle for water".
It's probably nothing, it's probably tongue in cheek (or coded messages) but if you believe that the Moon landing was faked then this is another red flag and prob's why NASA (along with others) have insisted this be kept locked up. What do you think was in these tape recordings that couldn't see the light of day?
Why did they painstakingly go through them, listening to every single word and why is there over 19,000 hours of radio chatter kept locked up anyways?
This video below is of the Apollo 17 Moon Lander taking off from the surface of the Moon:
Sources: Express.
Sources: Alien UFO Sightings.