An eye witness saw a couple of UFOs just above the Moon In the daytime. This is real and I have no doubt whatsoever about it. Theres no way it's fake.

So, after seeing this spectacular triple UFO video (possibly only 2 UFOs) which was recorded during the day, I'm left speechless.

It regularly takes a lot for me to become speechless but after giving this a quick glance at first, I swear that I did a double take on it and I didn't even hesitate to go back to check it out again. And, yet again it took my words away, in fact it put them in the loft space and shut the hatch, lol. 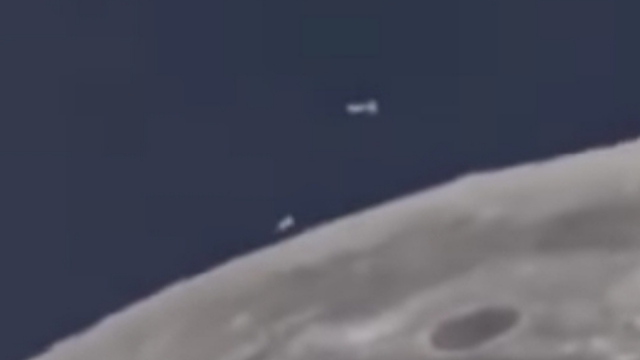 Credit: UFO News YouTube/UFO Sightings Footage/UFO News/Ufosfootage/Instagram.
It's during the day, so right from the get go this is video upside down and inside out! How the hell did the eye witness see these UFOs just above the Moon? How was he or she able to see this triple UFO formation through our atmosphere? And the zoom, omg the zoom is amazing because it's like it's never going to stop. I reckon soon they'll invent a never ending zoom function on telescopes. 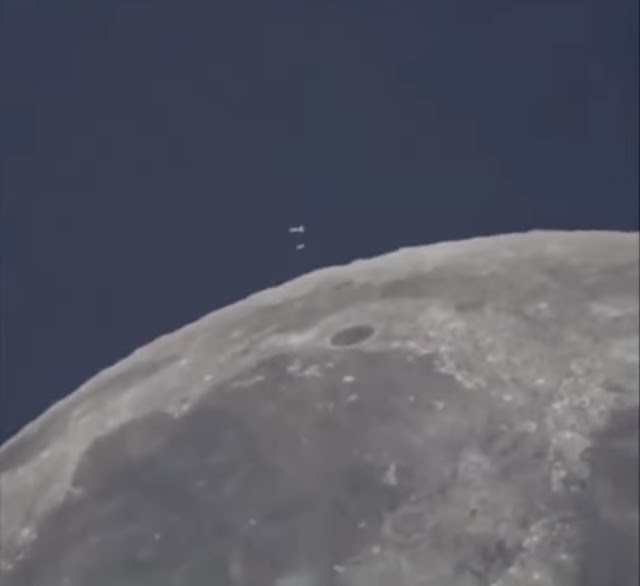 Credit: UFO News YouTube/UFO Sightings Footage/UFO News/Ufosfootage/Instagram.
It's this zoom which I know (from asking some graphic designers) that it's hardly the first choice for hoaxers to fake because keeping the UFO looking right while zooming in is a hard gig. It's probably doable but not for no reason, because it seems like this doesn't have any reason to have been faked... That's how it looks to me!
Trying to apply new elements into a video or add new graphics into an already existing video is probably hard enough already without an additional zoom - but to add graphics in an overlay style, or to add brand new UFO stickers type of graphics like a PNG to build up a UFO video is (I would assume) nearly impossible?
But, I suppose that's all well and good, but this is a UFO video that increases the zoom in incremental steps and I'd hazard a guess that it's near on impossible to do and especially have the correct end result looking flawless. And, to boot there seems to be no reward whatsoever or any sort of incentive for the hoaxers, so what the crazy hell is going on?
The answer is simple, because it's real.
Instagram is teaming with the best UFO videos and UFO Sightings (albeit short videos) because it's where people with existing channels just simply upload them to their followers. That's why I am always coming across "random UFO videos" that are different, genuine looking, interesting beyond words and some of these just ooze UFO disclosure. Like it's written all over them, but between the lines. Common sense goes a long way when it comes to Aliens and UFOs.
Here's the awesome video:
Credit: UFO News YouTube/UFO Sightings Footage/UFO News/Ufosfootage/Instagram.
Because UFOs are everywhere now, and the recent UAP disclosure we're beginning to see thousands of people witness the UFOs and upload them to their online social media sites as they're no longer afraid to say publicly about their own beliefs. But some people don't like it and prefer it if they stayed in the background.
That's understandable.
Uploading the UFO evidence anonymously is a good thing because it's the UFO that's so important so staying anonymous is something that I thoroughly agree with, power to you.
Related post
NASA Covers up Another Blatant And Huge UFO At The ISS
I agree with it wholeheartedly because people can see these UFO videos and they can change their attitudes on a dime so-to-speak and not agree with the uploader which then becomes a very nasty online situation.
Plus there's a lot of ridicule including sarcasm, racism, ageism, sexist and even homophobia can and does happen, everyone knows that. Loads of people have seen first hand in the comments sections on Facebook and Twitter for instance where people can be very horrible.
That's why I don't have a problem with people wanting to stay anonymous. Anyways, it's the UFO videos or UFO photos that needs to be heard.
Credit: UFO News YouTube/UFO Sightings Footage/UFO News/Ufosfootage/Instagram.