Triangle UFO photos shows a silver colour, metallic silver UFO in the sky reflecting the Sun and moving around. The eye witness caught this in Oz.

Okay, I'm really intrigued by the shapes and the colours which have me staring at this thing trying to figure it out - but also it's the short bit of info - what is going on here? Let's see.

Seriouse though this is, there's a short piece of writing (below quote) that has me a bit concerned because it's very specific and as a statement, it needs to be looked into. I want to know if it's true or false? 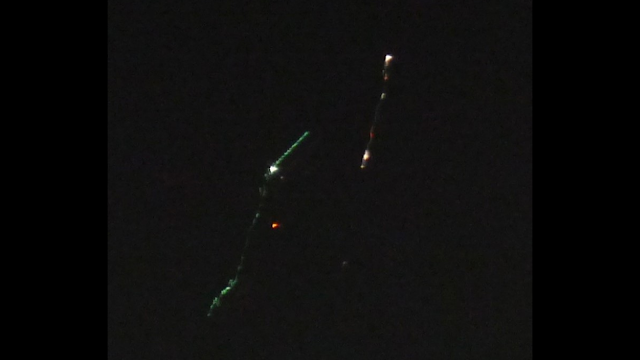 There must be a shadow covering the whole middle part of the Starcruiser or UFO whichever you choose to call it? The shadows are everywhere in this photo and is covering a large proportion of the surface area. Maybe I can put the image through a filter to help us see what might be lurking underneath the shadows? 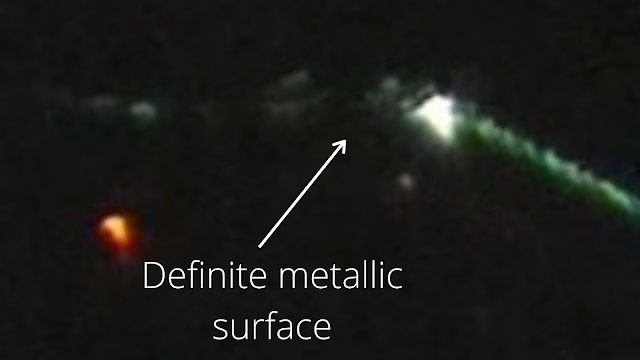 Credit: UFO Stalker/Joseph M. Triscari/UFO Sightings Footage/Canva.
The eye witness has put a less than detailed description with the uploaded UFO report (which was submitted to MUFON). I accessed the information via UFO Stalker which is a sub of MUFON. In fact it's a real time UFO tracking system based on the MUFON Case Management System.
But it's free, remember that!
It gives an immediate view into worldwide UFO activity. I thoroughly recommend that you use UFO Stalker because you can see UFO events literally on a map of the world as they happen in real time and not pay unlike MUFON.
In the image below, I've put it through a filter using the awesome editor Canva and it's brought out a bit more but not a lot more. It can only bring out what's there. It doesn't seem like there's much under the shadows but if you've got better editors or access to better quality editing software can you see what you can do with the images please? Let us know in the comments below on what, "if anything" you can bring out in the image, cheers. 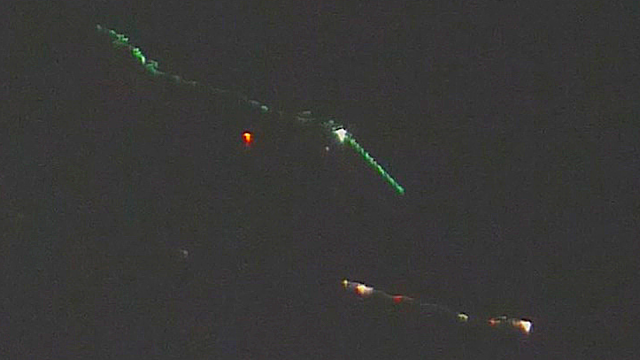 Credit: UFO Stalker/Joseph M. Triscari/UFO Sightings Footage/Canva.
I don't know what to make of this UFO photo because the information is vague at best and non existent at best. Seriously, I'm so grateful that it exists because it's part of the Ufology bigger picture. I'd rather there be a ton of information supplied but it is what it is.
I don't know what this Starcruiser word actually means or refers to because there's lot's of meanings and different images online.
Quote:

That's it, just a few word's and I don't know what this means to be honest with you guys, it's either a bit of insider information or it's a guess as to the identity of the "craft" or even some delusional ramblings.
Summary; Two radical looking ships if ever i've seen one. inverted and forked.
Sighting Basics.
Case 115320.
Occurred 2020-04-28 21:12.
Reported 2021-05-12 17:24
(Reported 1 Years Later).
Source MUFON.
Summary Two radical looking ships if ever i've seen one. inverted and forked.
City, Denver.
Region, Colorado.
Country, United States.
Postal Code, 80219.
I don't mean to be disrespectful regarding this, but because the lack of information is given on this, so I must list all the possible possibilities that this detailed description could mean? That's what I have to put when there's a distinct lack of information given.
But this is being very specific but very vague all at the same time. Starcruiser is specific, but no details is vague.
I'm hoping that it's useful information to someone, that Starcruiser #705c (c) actually is a real, tangible aerial vehicle but I don't hold out much "or" any hope because I don't have any way to verify this unless you can? I'm only supposing that the public doesn't know what this is because it might be top secret and because of the lack of information either way - if it's real or not, this could be why we are seeing a bold claim?
In the photo is a Starcraft?
I must admit though that it is intriguing, it's nothing I've seen before and it seems to be the outline of an aerial vehicle of some sort with light's on inside and outside of the craft?

But on the other hand, I don't know which way to even look at this UFO photo? Is it upside down, is it right side on or should we be looking at this as two separate entities? Is it landscape or portrait. It's confusing and yet intriguing because there's enough to determine what it is, but if only we had a bloody hint!
Can you please shed any light on this little conundrum because it's getting tossed in the bin if not. It's not quite obvious to me what it is. But the description on UFO Stalker is definitely enough to get my attention, especially with the photo looking like it does.
If you read my blog posts then you will know about my beliefs regarding MUFON and what it is that they've put together as a business? I'm definitely not a fan of selling access to volunteering UFO information. Starting a business and then using that as an excuse to charge people for money is not cool. To then say but it pays to investigate the UFO events, well that's not cool at all. It's basically arguing for arguments sake!
Self appointed gate keepers holding the freely given UFO evidence ransom definitely does not get my vote, no matter how important the argument is. That's neither here nor there.
I'm on about charging for access to freely given UFO videos and UFO photos. It's totally different to self appointment and investigating UFO events.
So, remember that the alternative is UFO Stalker.
Credit: UFO Stalker/Joseph M. Triscari/UFO Sightings Footage/Canva.