Black Ring Filmed Over Russia While Witness Was Driving

Is this a black ring portal or a black smoke ring phenomenon which is happening above highways around the world. What's causing these black ring's?

A very strange type of portal or a smoke ring has been reported by people in Russia and you've gotta admit that this looks really interesting, so what is it that was filmed over Russia.

It's been labelled as a black portal by the people that filmed it and some people are saying that it's a smoke ring. I've seem this type of thing before and I'm pretty sure that you have as well? 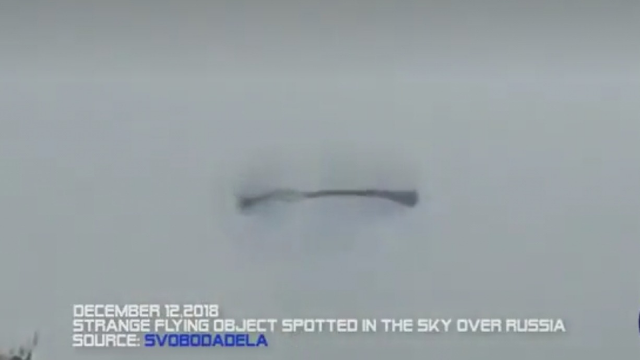 Credit: SVOBOOADELA/UFO Sightings Footage/UFO News/Canva.
There's definitely something there that's not what is in question, but what is in question is what the heck is it? It's more than likely going to turn out to be a smoke ring, that's my early opinion but what's made it, is it a craft, a rocket or a UFO? Who's directly responsible for such a thing right over a highway (if at all) which brings up a load more questions about safety, but that's only if its a man made object right... because, if it's man made then someone is responsible for it? Let's try to get to the bottom of what it is. Could it really be a portal or an unknown object or an unknown craft even?
I "have" written about this same phenomenon before (I'm calling it a phenomenon now because I've found the exact same black circle in the UK), oh but it gets even better because I'd literally forgotten about the research I'd done in that post and the videos I'd discovered which I'm posting in this post but right at the bottom of this post. I decided to just go through the thousands and thousands of post's and news articles that I've written before and low and behold, one very, very similar event occurred in the sky right over another highway but in the UK near Warwick Castle. 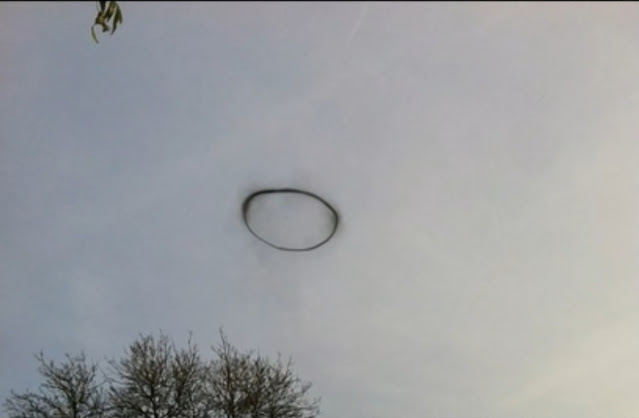 Credit: TheScariestMovieEver YouTube.
Source Ufolovers Instagram.
Also there was another black ring that appeared in Copenhagen not long before that one and yet another one in Denmark. Then we have the black ring in the Instagram video which has not got a place, but it's still another black ring incident so it's got to be counted, right. So that's 2 in Denmark and one in the UK and now this one in Russia plus the one in the Instagram video with no place. So that's 5 black ring's or portal's if you like and after reading my other earlier post, it was attributed to CERN which is The European Organization for Nuclear Research, known as CERN, is a European research organization that operates the largest particle physics laboratory in the world. 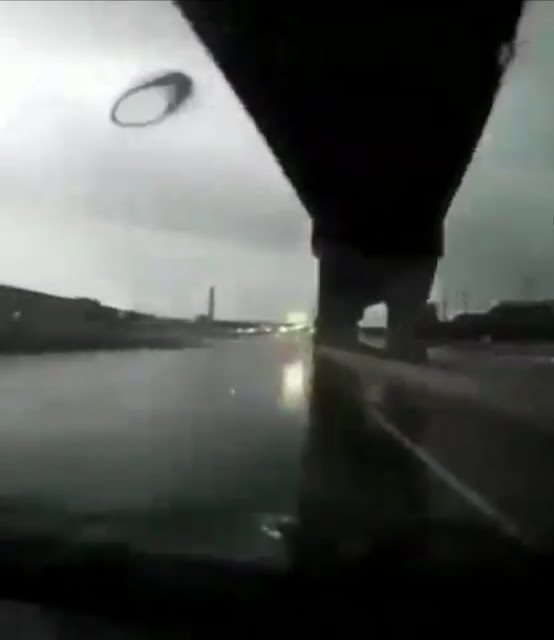 Credit: UFO Lovers Instagram/UFO Sightings Footage/UFO News.
The black ring sky portal here in this image happened in an unknown location but we have the video. Check out this awesome link to UFO Lovers Instagram video to check out that "black ring phenomenon" above a highway, as I've already got 2 videos in this post.
Also lightening was opened up as a possibility and I'm liking that one because these videos all seem to be filmed in very poor weather conditions. That really could be crucial to our investigation and not CERN at all? But we can't rule it out neither as CERN could have created these weather conditions and the smoke ring's are the tell tale signs of CERN in action? Now that makes sense to me, using the weather as a weapon.
Quote:

Lot's of strange events have been attributed to CERN scientists including that they have thrown us all into another reality.

Please remember that I had written this next part of my post before I had found my earlier, earlier post which I had written in May of 2019.
*****
Or is it a simple man made aerial display from a garden party next to the highway? It's already been tagged and called a sky portal which is probably over the top - but it still can't be ruled out but then again, lately I'm being a wee bit more cautious and on the fence a lot more because closing doors in front of me isn't going to do any good. Someone knows what this is, someone will have the answer out there. 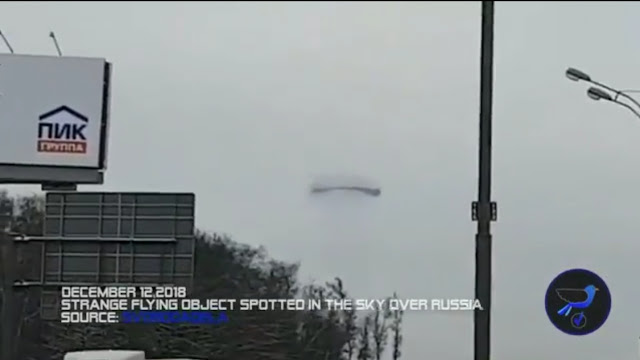 Credit: SVOBOOADELA/UFO Sightings Footage/UFO News/Canva.
I think I need to get out of this slump of being on the fence, what do you think about that? Should I be more determined on my opinions or is the fence still the right place to be taking into account that anythings possible? Please let me know what you think about that, thanks.
Related post
Black Circle or Smoke Ring Right Above a Busy Highway in The UK
This video, it's definitely real as there's just to many variables in this video for the Black ring to be in relation to and still look real. Fakers tend to only have the object they're faking in the video so they don't have to tweaking the UFO to look right. That's my understanding of faking a UFO sighting? I could be way off though...
This isn't the first time I've seen a smoke ring type portal before. I've seen the videos from the UK and the US plus over Europe. What's your thought's on this guy's?
Please share your thoughts and opinions also any ideas that you might have about what is in this short video. There's actually quite a few of these strange videos around the Internet and I'm just as puzzled now as when I started writing this post. I tend to do quite a bit of research coming back to the post I'm writing many times throughout the day but this one's stumped me.
Here's the YouTube video of the "black smoke ring portal" over the highway as posted by Thescariestmovieever YouTube channel - all one word.
Please share your thought's and opinions also any ideas that you might have about this awesome multiple black ring portal phenomenon. Because it definitely is, I've shown that there's many incidents that are occuring around the world and people are becoming aware of these phenomenal portal like openings in the sky, usually near to a highway.
Credit: SVOBOOADELA/UFO Sightings Footage/UFO News/Canva.