How did this fascinating and extremely controversial, ancient marvel of the ages get built without anything that could get the job done "and" get it done to such a magnificent standard, that it can't even be done today using the technology that we "think" they had?

Just to start with guys, some stones are over 100 tonnes... They could also be hundreds if not thousands of years old. We just cannot date the stones or the site itself, this is worth remembering. The blocks are made from andesite which is ultra, ultra hard. It's almost as if lasers or machinery was used to create stunning structures and carvings here.
Guy's, I have a massive problem with this quote below because how did the Incas know that there was lands beyond their land? Sent out to populate their respective lands? It sound's like they had knowledge of lands that they couldn't have known about, right?

The Incas believed the city was the place where Viracocha, their deity of creation, created the ancestral people of all ethnicities and sent them out into the world to populate their respective lands.

I mean just in this one image below we can see drilled holes, impossible carved designs and it's stone that only the bravest of carvers would tackle but only if they had the right tools of modern day mankind? Unless forced workers had to create these stones, but there's no information to suggest that only skilled craftsmen would have been able to create these unless you know ancient Alien entities operating within Puma Punku created these? And that's more than likely based in the "who else could have created these" theory? And I think I'm leaning towards this assessment (small though it is) it's still better that the hammer and fragile chisel theory, right... 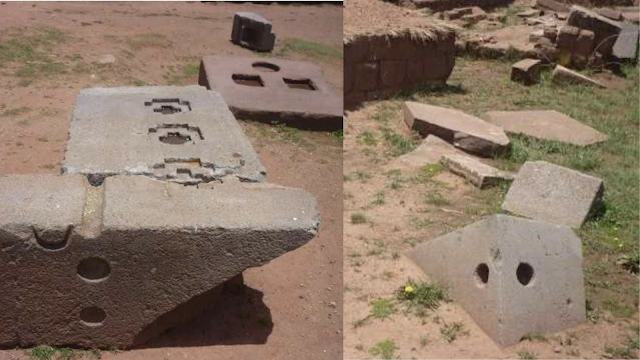 Credit: Ancient Origins/History YouTube Video/UFO Sightings Footage/UFO News/Canva.
You do know that it's a laughable theory don't you? This is some of the hardest stone on the planet, it's just so far from what's possible that if we do talk about the possibility of a copper chisel or a iron chisel and a pick could create these sublime rock formations and intricate statue like carvings.
Quote:

Early explorer and engineer Arthur Posnansky, one of the first modern explorers of the site, dated Puma Punku to about 15,000 B.C.; modern archaeologist Neil Steede stands behind Posnansky’s claim.

It all comes down to that one word which is think. What we think they used was "primitive tools" and a moderately skilled work force yet even in today's world it couldn't be done so something or someone with extraordinary skills or extraordinary tools (for the first time) had to of been utilised and deployed? That all stands to reason right...
Unless your a hardened and to the point person and stay to the facts kinda person, then it must have been perfect carving by humans that resulted in one of the real ancient times anomalies because Aliens don't exist and never have.
Or, your like me and understanding that this type of stone structure and carvings, buildings and technology couldn't have been done by mankind then the only other answer is an advanced peoples now extinct or Ancient Alien being's using their own advanced technology?
Related post
Ancient Alien Elongated Skulls Not Human According To DNA Sample
I want to say that the holes and carvings are impossible for the ancient world to create using the technology that they had which was so primitive. But yet there we have it, the actual real bona-fide evidence is right in front of us. It's hard to dispute with the evidence like this and yet it's real, it's in situ and there it will stay for the rest of eternity "mocking us because we have the evidence but we cannot accept it". So, it's mocking us, it's like it's looking at us saying "come on, figure me out lready if you can"! Just look at this fantastic stone block below, that's a drilled hole. 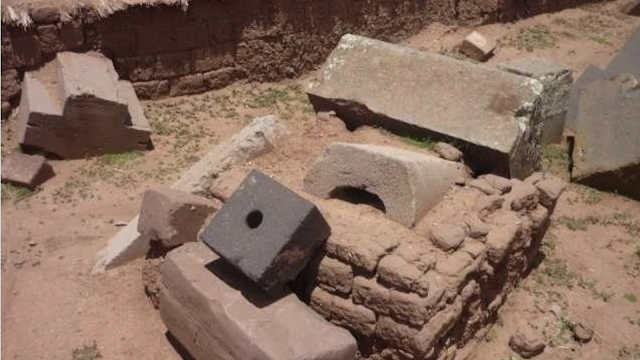 Actually in plain terms there's no way that this was made by using "of the times methods" of construction that even predates the Incas. Seriously even if they had the worlds best architect to plan everything and use strategies, there's no way it could of been achieved using the tools they had to hand.
So it is suggested that advanced machinery was used by Aliens or by people with special powers and that this place is actually as old as hundreds of thousands of years old.
Puma Punka was an abandoned city (apparently, but how do they know that and if they know that - when was it abandoned?) which was part of the conquered area that the Incas took over. They moved in yadda yadda and still we have no answers?
It was a place which only came to light because the Incas moved right on in and incorporated it in to their own empire. Puma Punka was incorporated in to the ancient city of Tiwanaku, that's a fact.
This doesn't sit right with me because it just came out of the jungle and literally has all the hallmarks of been part of some intelligently built city by an advanced peoples and culture with strange symbols that are everywhere still to this day they survive in excellent condition? Plus the building of the place could not be done! There is that don't forget. 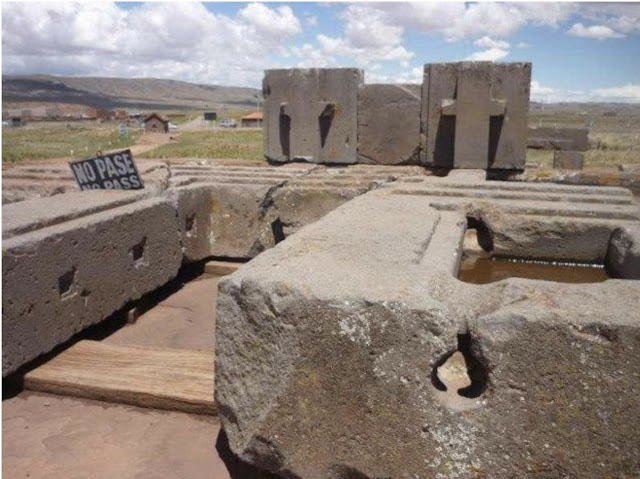 Credit: Ancient Origins/History YouTube Video/UFO Sightings Footage/UFO News/Canva.
Above image:
This is yet one more important piece of the Ancient Extraterrestrial Entities theory creating stone blocks using advanced technologies which was used to create stunning structures for the ancient people of that area which lived either nearby and then moved into the structures or helped in part or fully to create Puma Punku? All theories are welcome because they are all valid until proved otherwise.
Quick quote:

Puma Punku in Bolivia is one of the world’s most mysterious ancient sites. This remains true for both academic archaeologists and historians as well as rogue historians who investigate the hypothesis of advanced prehistoric civilizations or ancient assistance from extraterrestrials.
Puma Punku covers a large part of the massive ancient city of Tiwanaku and it is located just southeast of Lake Titicaca in the Andes. The city predates Inca presence in that part of South America.

The Incas believed that Puma Punku was the place where Viracocha, their deity of creation, created the ancestral people of all ethnicity and races and sent them out into the world to populate their respective lands and areas. But, they didn't even know it existed before they moved in so how do they know this and they moved in because it was abandoned right! I don't get that?
How, what and where? So if they believed this then it cannot of been their original cultural belief because they didn't know about Puma Punku right? It's like saying that London is our cultural heartland but not even knowing it existed. They must of found Puma Punku then wrote all that in to their beliefs.
Which came first the egg or the Chicken and either way this doesn't stand up to any kind of logic! Is this made up by an organisation to get us to think that this was attributed to a peoples because there really is no explanation for it (Puma Punku) existing but yet it does exist and it has all the hall marks of being made by Aliens, I wonder.
So this is my question, what was there, already "why we are been denied the knowledge of Puma Punku" what was it that made the Incas change their whole culture, religion and beliefs plus their understanding and even their own creation story got changed to this one we have now!
What the hell went on back then that we are been denied the knowledge of? The Incas were not idiots, they was a supreme peoples with supreme abilities and they had advanced everything for the times. 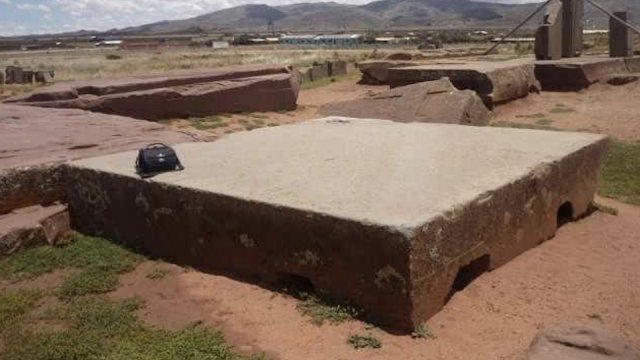 Credit: Ancient Origins/History YouTube Video/UFO Sightings Footage/UFO News/Canva.
The Incas had reason, they had knowledge and they certainly had something which enticed them from Puma Punku to change their whole beliefs as a one people system. That is like us modern day people, all of a sudden finding a hidden city in the forest and taking it over and living in it, changing our culture and our religion and our creation story.
Related post
Ancient Alien Statue And Flying Saucer Discovered In A Mayan Cave
Their ancestors lived and died for their previous cultural beliefs and their previous ways of life so again I ask, what the hell was in this city called Puma Punku, which just appeared from nowhere and made the Incas change everything?
Was it abandoned by a people that had either enough of it and walked away or did they all die in a way as yet unknown? Was it because "they" left Earth (literally) or did they simply abandon it to move elsewhere on Earth - if so the who were they and where did they go?
Ancient Origins has researched this topic at length so it was only natural that the questions I had about Puma Punku I went there to research, but actually it too cannot give us a time frame on when Puma Punku was established or created, built or transformed. They can give us a few educated guesses but that's it. All links for reference are at the bottom.
So yet again, with the age of Puma Punku in dispute, it could be hundreds of years old or thousands and thousands of years old depending on who you ask? So what other so-called facts can we check up on, it's Puma Punku so everything is up for discussion by everyone and their Budgie? But that's for another day and another story otherwise this post will become a book and it's long enough already, lol.
Here's a great YouTube video you should see uploaded by History:
Please share your thought's and opinions also any ideas that you might have about this ancient Alien conundrum that we need to look into. I'd also appreciate it if you could share this post with someone who you think would appreciate it, cheers.
Credit: Ancient Origins/History YouTube Video/UFO Sightings Footage/UFO News/Canva.