Here's a video showing a UFO sighting that is electric blue in colour and it's hovering for a while. All of a sudden it rises but then it flies off.

This is a spectacular UFO sighting filmed directly over over Groom Lake "Area 51" in Nevada with the eye witness filming it giving us a running commentary and it's at night time.

I'm definitely inclined to believe that this actually happened, that it's real and sincerely had taken place. 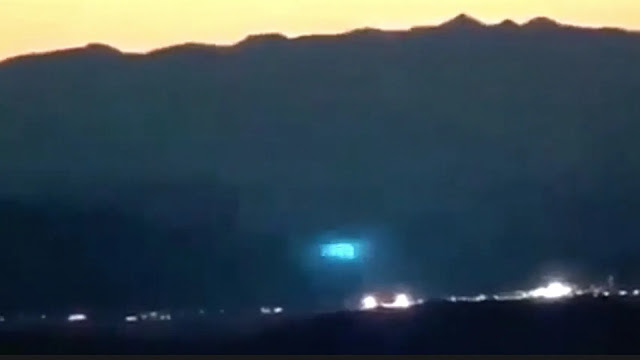 The videos integrity looks legitimate to me and of what people are recently saying about this UFO sighting thing's do look good? But I genuinely think that there's something more to this and that's based on just one thing, how close he is to the base? That's a very close up personal UFO sighting in terms of secretive Area 51, right?

The guy's telling us what's going on while he's filming which is great but he doesn't address the fact about how super close he is to the UFO itself? Which as this is a "equivalent of ringing the doorbell at a Cathedral" you'd think that they would have swept the area and posted look outs so nobody has any access to seeing what's going on! Because(and I can't stress this enough) at the end of the day it's Area 51, the most secretive group of Government building's on the planet except for The Pentagon. So that's the only red flag as far as I can tell about this?

Is this Area 51's most brazen and blatant UFO test flight ever, probably in my opinion? And I only say that because of the very long range that this electric blue light can be seen from and it's also blatantly obvious what's going on here and so you'd expect security or "the cammo dudes" to be on him like a fly on a hot dog!

As he's filming this he's giving us a great running commentary which I don't think that's a good thing to do because I remember hearing before that dotted around Area 51's perimeter there's actually a host of hideen microphones, hidden microwave sensors, Infrared cameras and other alarm triggers and that's not to mention the deterrent of the always visible Cammo Dudes! So how's he got this close to the action, as it real, does it look like Area 51 to you?

Don't forget that this is Area 51 and so I'm not sure if he's well enough away from the military base or the resting facilities for security personnel "not to detect him?" Because I know that there's a certain distance you've got to have between you and the base if you don't want to end up with a camouflaged security personnel all up in your face? Isn't there a perimeter fence all the way around it? That really doesn't seem like the best result does it especially when it's already been given... What's already been given, what I hear you ask?

Oh nothing really, just the order to shoot to kill. On the spot and without hesitation, without question and also they give it with enthusiasm!

Have you ever seen a human being with a live shoot to kill order? No, well that's a very good thing believe me - just hope that you never find yourself by accident in that scenario because that, that right there really is scary, I'd stay away anyways! But that's just me and how serious I take life. It has to be because we only get one shot at life if you'll excuse the pun. Because and this is the crucial part to this, they're "quite happy to carry out this order" without question and yes, that's what makes it scary! If they had any ethical objections to this, they'd be replaced with a more sympathetic version so judt be aware about that.

The only thing that the Cammo Dudes has ever come across at Area 51 is people lost and curious UFO enthusiasts hopefully?

It is really not the movie's.

This could either be a telephoto lens video or he's using a normal camera with great zoom capabilities. The UFO witness getting this video is remarkable and the base itself are remarkable for what they've done equally in my estimates because one is reverse engineering UFOs and probably holding Alien Grey's and the other one got close enough on a particular night and got an unprecedented UFO sighting the likes of which we've never seen before caught on camera, like literally!

Not this close up anyways.

I'd like to know for sure what actually went on, on this night but I'm afraid based on the fact that he's way to close to the base, we might never know what or who or why this even came into existence? The blue UFO light was almost grounded on the surface like it was on leg's or a platform and then it looks like it started to rise and eventually it takes off flying towards the right (as we see it) of the base and then it's hauling ass big time but to the left. Then all of a sudden the blue light vanishes altogether! In a millisecond the blue light UFO was gone, it just vanishes so fast that in the blink of an eye the craft, light Orb or whatever type of UFO you call it - the title on the Instagram video said "Project blue Book" and that's it with a few hashtags so I'm not so sure that it's a literal reference to this UFO specifically as being a part of Project Blue Book, or if it's a play on words just because it's a blue UFO? There's no other information with it.

If you have any thoughts on what is happening in the video and you have some opinions then please let us know about it in the comments section below, cheers. Also if you can share this post with someone I'd appreciate it, thanks.