Here's a fantastic UFO sighting that is shaped just like tube or a cigar. It's a long dark tube that's flying slowly over the Great Wall Of China.

I personally like this UFO sighting because it's got a lot of witnesses on the Great Wall of China seemingly talking loudly about it.

There's no real way of knowing which way this UFO come from but it's definitely there and it got into China somehow?

What I mean by that, did it come straight down from above or was it heading straight to the Great Wall of China from a base or an underground Military Base even? Will we ever know where this came from and is it even real, but I truly hope that it's real? 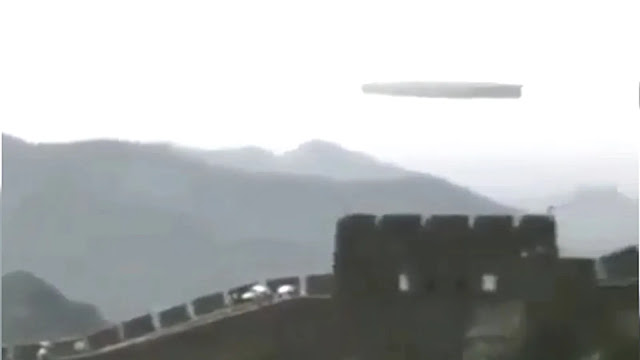 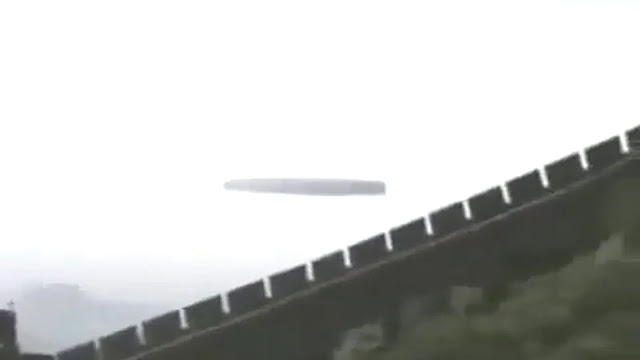 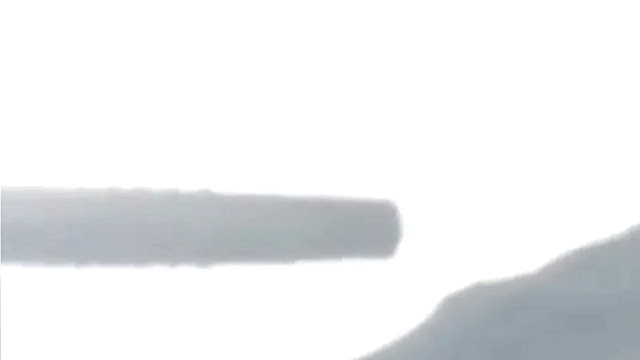 It could be a university students awesome course work or it could be from an indie arthouse movie for all we know?

But one thing I do know guy's is that recently I've had a massive, huge shift in my beliefs and opinions. On the whole as far as Ufology goes I'll alway's love it, it's my passion in life. That and writing, I love to write because it's a great therapy.

But unfortunately there's a very real and a very real darker, more sinister side to it in the horrendous comments some people are leaving and it's not fair.

It's to do with being a bit different because we like UFOs.

What I mean is if I post something that is a bit different (like this UFO shaped tube over the Wall of China) if you or me post something like this, there's a percentage of people who will try all-sorts of disgusting tactics to poke fun at us. It seems that anyone who dares to be different and have a different voice or a different opinion from the "accepted version" or answers that are different than theirs people are becoming horrible and it's actually getting me down. They're called troll's, that's their official title.

Recently, I've started to be more open with my thoughts on various UFOs, and on conspiracies and what not - but that's when the "troll's" come out of the woodwork like the troll's they are. They're leaving nasty comments, trying to start horrible rumors and in general just trolling UFO believer's. I swore to myself that I wouldn't even read any but it's hard not to.  I can't just post a blog article then turn around and wash my hands. But, today I was reading the comments on the post's I've written like I normally read them and it's more toxic than I ever thought it could be! That's actually an understatement because it's just nasty. I know the difference between real, genuine UFO believer's and people who are bored trying to create drama.

Granted it's a small percentage of people and the vast, vast amount of people who leave comments on my post's are awesome 👍🏻🙏🏻 seriously and it's you guy's that have proved to me that I must stay and continue writing about UFOs. Getting voted number 1 for the UFO website in the UK for 3 year's running is no easy feat. Even if we don't like every single post, life's just not perfect, it's never gonna be perfect, right but we don't belittle it or the people who do believe it.

Will I be reading any comments again?

I was thinking though...

Why should I? Because nothing's changed. It's literally every other comment left on Facebook or Instagram etc. I'm not sure why people do it? Is having a different opinion really that bad? Is it that bad that people have to leave some of the most disgusting comments I've ever had the misfortune of reading? No is the answer! It's just bored people who are not thinking straight.

Time will tell if it gets any better in the comments again? I enjoy the interaction with the people who send me direct messages on the UFOs I've written about or the UFOs that they've filmed. It's a nicer, calmer way of communicating so if you believe that you've got an answer or an opinion on what I post and it's important to you, if you'd like me to know or if you'd like to strike up a conversation? Message me anytime my friend's.

I absolutely didn't want to even go down that road but guy's, it's gotta be said as I'm sure you've seen the troll's. I'm pretty sure that it's not you (who's reading this post right here now), it's the people who have been leaving the nasty comments - the one's scrolling through the Facebook posts with no connections to Ufology as they're just on the Facebook blog roll "one post after another" you know what I mean? People who have no interest in Ufology but like to take a dump on anything else that's different or they don't understand. These are the people I'm talking about and it's getting me down, I'll be honest with you. I shouldn't read them, but I'm researching UFOs and these are comments on UFOs, it's like "what the hell" right? I'm interested in what people think about UFOs that's why I ask for people's thoughts and opinions.

Getting back to the UFO which is probably in another Galaxy by now lol. If you can see, it's almost slightly or slowly (almost menacingly stalking) flying past the Great Wall Of China? The people are definitely talking loudly about it, and don't forget that it's China where the people are so polite to start shouting at the UFO or screaming at it. It's probably not the done thing to shout thing's out loud like that.

It's not a Blimp, at least I don't think so because if it was a helium Blimp, it'd need a rudder at the back, it would need ailerons to adjust the the turning, the height, it's speed would need to be factored in so that would need directional propellers that can turn around and we cannot see anything like that?

I don't see anyone actually pointing at the slowly flying UFO but again, that could just be because the people are to polite and will not point at it. I'd expect the people who see it to maybe run away from it? That definitely could be something that indicates it's a CGI rendered animation? I'd like to think though that if it was CGI, there would be a lot of details on the craft itself, right? But instead we just see a black cigar like, missile or tube? This actually could be where all those thousands and thousands of Orbs are coming from! People are sending me so many UFO Orbs I can't count them all. I'm getting 50 a week easily. Unfortunately though guys, it's been able to get round to them.

Here's the epic video that I believe we might be proved it's real, or CGI rendered animation...

If you have any thoughts or opinions on this UFO post, please share it with us in the comments section below, cheers. Also if you know someone who would appreciate this post please can you share it, thanks.