The US has had a lot of the freaky strange event's happening for a long time now. Why should this cloud anomaly be anything out of the ordinary.

The US recently had a strange phenomenon occurr in it's clouds and it's definitely straight out of some sci-fi story.

This short clip was uploaded to Instagram by Theourdopespace account and it is so strange that it reminds me of a black hole. 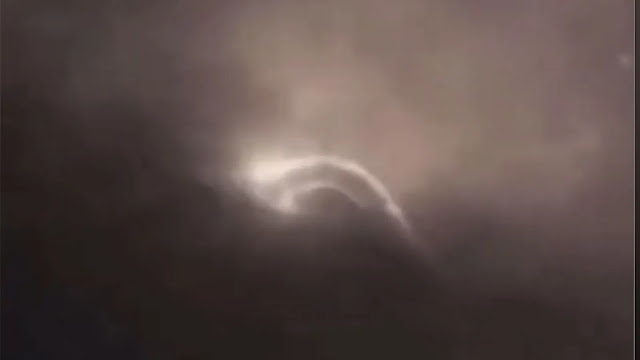 It's a truly unique looking phenomena that for once in a while it has me stumped.
Is it really just a video of a black hole rendered over a normal video as I can't tell? It looks to real for that matter and I'm sure that if it was a hoax we'd be able to tell? There's so many strange things happening in the world "who can tell anymore."

I did think it could be a Ferris wheel in the background and that maybe there's a fairground in the back behind the building's, maybe? I was reading up on the comments on this once epic video (yes I'm starting to have doubt's about this) and someone suggested that it might be the signs of the end times... Lol, when isn't it signs of the end? It's a bit morbid I guess but there's got to be a more natural explanation for what is causing the cloud's to looks and act like the the world has a black hole developing?

One person who was writing about this unusual event in the comments section mentioned that there could be a vortex taking place here and that there's probably some sort of explanation? I'm only mentioning it, that doesn't mean I believe it! It was also talked about the event being a bit like a Fast Walker?

According to promotion materials for a 2006 documentary called “Fastwalkers” (apparently Fastwalker and Fast Walker are both used), NORAD (the North American Aerospace Defense Command located at Peterson Air Force Base in Colorado) uses Fastwalker as a code name for “unidentified flying objects that crosses earth's orbit and land on its surface.” It claims that NORAD tracks an estimated 500 Fastwalkers annually (every day except Christmas Eve).

There's gonna be a time when we're all going to know that we're not alone in the universe, and when it does come time for everyone's mind's to be blown, some people are going to be cool with it, some are going to call it fake news and most are just going to accept it. 50 year's ago just the mention of the UFO acronym was enough to get you locked away and that's no word of a lie. In 1975 (or there abouts) people was said to have mental health. It's good that we've at least progressed from them day's at least.

There has to be a reasonable explanation for what is going on here, right?

CGI, if this is a computer generated video then Ufology is messed up figuratively speaking and literally speaking. If it's this easy to divide us then it's not so much as finished but rather, game over because this looks real to me. Not only just to me does it look real but there's a lot of people who've stated that this is real or rather this looks real to them as well.

There's also the same theme going on in the messages about this, people seem to think that this is a bad CGI rendering from Photoshop? I'm not sure what to make of it, if it's a Photoshop rendering then that's some next level editing tools and I don't think it's that at all. Well, these are my thoughts on this strange and bizarre looking cloud anomaly. What's your thoughts and opinions on what this could be?

Here's the extraordinary video of the cloud anomaly: