There's nothing like discovering something new. Antarctica is home to great Pyramids which have been denied for a long time, man made or Alien made.

I'm going to be asking for people's knowledge and your understanding of the ancient past of our ancestors, our human beings ancient time lines.

It's totally fine with me if people want to believe that our history only goes back two thousand years and before this marker we was a tribal, warrior like people.

Some think we only had one aim and that's protecting our cattle or defending a treeline from here to there from marauders. But personally, I don't believe this and the reason why I don't believe this is because there's evidence to the contrary hidden away in selective museums that isn't shown because they don't know how to show it? Nobody knows where it fits into the accepted version and why it even exists.

Out of place artefacts (Ooparts) and thing's for all intents and purposes that have a story but it can't be told for fear it changes the official narrative! Is it really just as simple as that "it doesn't fit in with the current accepted account of history", so it's suppressed. No, that's just a symptom of the cover up. It's why it's been steadily covered up. Religion possibly? I'm hoping that people can help here and leave comments?

These out of place artefacts are ridiculed by staunch influencial academics and pointed to then singled out because it's different. People do see this but won't acknowledge it and in some cases people deny it!

I'm not saying that these are Pyramids in Antarctica, I'm not sure of much in terms Antarctica nowadays so we must look to the evidence... Admiral Byrd perhaps. 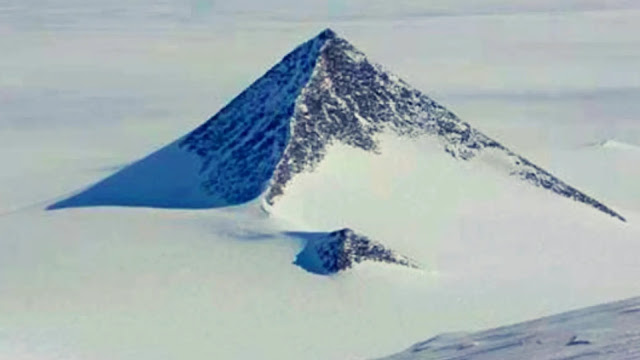 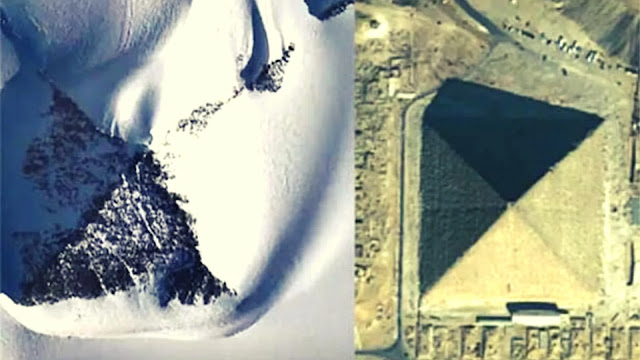 You've got to admit that it looks like a man made Pyramid from ancient times.

Stretching over five million square miles Antarctica is huge, it's easy to dismiss just how large it is. It has ice sheet's that are as deep as a mile and it's had temperature's as low as 60 or 70 below! There's weather in Antarctica that would freeze you within the shortest amount of time. It varies, so specifically it's hard to say but if it's winter and it was windy plus you had normal western clothes on, you'd freeze within minutes. Has it been surveyed, literally just a smidgen as a percentage. Overall, hardly anything. It's covered in ice, ice which wasn't there all the time and of which could be hiding any number of mysterious and as yet unknown structure's including Pyramids. This one (above, top image) is on the surface. Make sure you check out the video below of The Unexpected.

The official scientifically accepted time lines keep changing. That's through learning, it's through new advanced in technology and our understanding. So why can't these be Pyramids, who get's to say what is added and what is not studied? Let's throw into that complete mess the conspiracy theories some of which are rooted in truth and it's definitely spot on for the Pyramids in Antarctica because they exist.

Imagine each theory is a string of spaghetti. We should follow each string of spaghetti just like it's going somewhere, usually it's only to find yet another equally interesting time line that makes a lot of sense. Quite frankly it's confusing. Step back and ask yourself this:

There's a lot more conspiracy theories and they get more bizarre and downright absurd. But some stand the test of time like Admiral Byrd and the Pyramids. That's not to say that the one's I've just written aren't real because depending on who you ask, depends on which answer you get?

Who has ownership of Antarctica and yes you can visit but it's predesignated places and you cannot take anything, look it up. Touring Antarctica has largely been done by the US military in the old day's which is when they built Camp Century. They took along with them nuclear power in the form of a portable reactor but it was removed and Camp Century later was actually abandoned.

But, and that's a huge Kardashian but, hazardous waste absolutely was just left there and definitely, without any opposition to it or without any cover up, it blatantly remains there buried. But it's only buried under the ice can you believe it and it has become an environmental disaster not a concern as it was put in Wikipedia.

Like it's just a quick afterthought or a concern without any thought. Admiral Byrd encountered Aliens, there's an inner Earth, the hidden wall, Pyramids, Alien bases to the Loch Ness monsters holiday home. Okay scratch the last one but you get the picture because the one that sticks out in my mind which I've covered extensively in the past is the Tanks guarding a UFO.

The counterclaim was that they where the loading piles for scientist's cabins. In a row mind you, not four corners but in a row, that's not how science works. Loading blocks are needed at four corners.

The startling pictures show a four-side structure which bears an uncanny resemblance to the pyramids of Giza in Egypt. One of three structures that have apparently been found, it has prompted theories that humanity once inhabited the freezing region. Two of the so-called pyramids stand roughly 10 miles inland while the other lies closer to the coast. Scientists have long believed the freezing climate in Antarctica was much warmer thousands of years ago.

I know that people who stop by my Facebook page and Facebook groups have a absolute ton of knowledge or should I say "a wealth of information" when it comes to Antarctica and the ancient hidden past.

Ain't nowt like folk with a combined wealth of knowledge, skillset and experience with history, cultural diversity and the hidden underground history. Between us all, there's expert's in everything you can imagine like graduates in politics, history, astronomy, literature, oceanography, science in general and professor's.

The odd self employed pool cleaners to boot. Basically what I'm trying to get out is that between us all we can figure anything out? I know this because on just one Facebook page alone there's 5 and a half million visitors each month and the odds-on favourite is that amongst this avalanche of viewers, there's expert's, geniuses, university graduates, students and many other people.

Retired US Navy petty officer first class flight engineer in a squadron called Antarctic Development Squadron Six, claimed to have been part of a crew that flew through a “no fly zone” above Antarctica, and saw UFOs, aliens, and a giant entrance hole to an alien base. He was said to be stationed there between 1983 to 1997, when he retired, and on several occasions saw "aerial silver discs" flying over the Trans-antarctic Mountains.

US Naval officer Saw A Secret Alien Base In Antarctica, codename Brian

Pyramids in Antarctica are there, it's neither here nor there if you believe it or not, that fact still remains and it's not going to change anytime soon. But, is it man made or a totally natural formation that's the question? Considering what the Admiral Byrd's mission supposedly discovered and was subsequently forced to say nothing on the subject, it makes you wonder. Here's a fantastic video with more information, I hope you can make your own mind up about what's real and what's not...

Here's the extraordinary video that was uploaded to YouTube by History Channel:

If you have any thoughts or opinions on this maybe ancient times Pyramid in Antarctica then please leave your thought's in the comments section below, thanks. Also if you know someone who would appreciate this post, please can you share it with them, cheers.