Peruvian elongated skull has been branded one of the most interesting pieces after it appears to have been fused together. Ancient Peru metal implant.

If this elongated skull with the metal implant didn't exist then I would never have even considered writing a single word about it, but it does exist and it's definitely compelling evidence.

When I first started reading about this there was a title and a long-ish paragraph of writing which I was reading about it on my mobile phone. I thought to myself "there's no image, that figure's." So I started reading about this totally unbelievable story anyway and the more I read about it, the more I began to think this is just to outlandish because it's advanced surgical treatment but in the ancient world, right. But then after all I've written about the ancient world, the technology, the advances in science and the huge stones that weigh hundreds and hundreds of ton's "all" fitted with a precision that simply can't be achieved today! 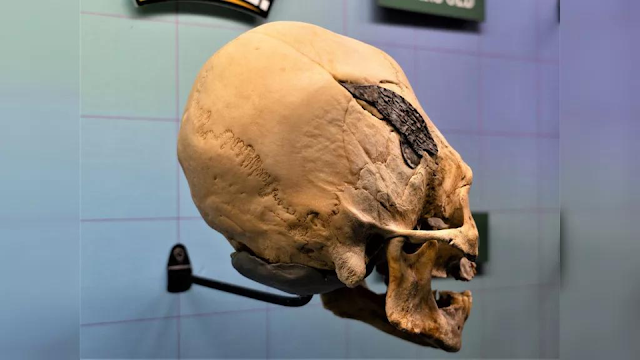 This skull from Peru has a metal implant. If it is authentic then it would be a potentially unique find from the ancient Andes. (Image credit: Photo courtesy Museum of Osteology) The Pyramids for heaven's sake just as another example all took some serious understanding of pretty much everything to do with architecture the likes of which that we cannot replicate today, fact! Using the same technology of the ancient world, we could not do it today. But because of these beginnings it's not too far fetched to believe that the people back then could perform advanced surgical procedures with success because it looks like the bone stsrted to grow around the metal implant. We wouldn't have anything if it wasn't for the first attempts, the initial first time trial and errors research and architecture etc given that there was a huge gap of missing time from this surgical procedure to today, but still it was done and now we have the proof.

"We don't know the metal. Traditionally, silver and gold was used for this type of procedure,' a spokesperson of museum said."

Below is two leading experts in anthropology, but both are at polar opposites in terms of their thinking and obviously understanding of anthropology... Which do you think is right?

The fact that the radiating and concentric fracture lines show signs of healing suggests this individual survived at least several weeks to months," Kurin added.

I think this is something fabricated to make the skull a more valuable collectible.

John Verano, an anthropology professor at Tulane University in Louisiana

So, there you go. I'm inclined to believe that it's real because the bone has started to grow around it! That means the metal implant was definitely put in when the person was alive. Now, it's definitely an ancient elongated skull from Peru, because of where it was found so that's why I'm saying yes. It has to be based on the evidence so far.

Then I saw the photo of the elongated skull! Bloody hell it exists and it looks beautiful. There it is, it's not just a fanciful second hand story from down the pub with friends. It's a real, bonafide skull albeit it's an elongated skull but that just makes it all the more interesting. We're talking about Peru. The Peruvian ancient world is anything but backwards, it's anything but limited in its original understanding of science, astronomy, the human body and languages. Ancient Peru had an highly advanced civilization with learned people who mastered their crafts.

The human body was something that was readily available as a research vessel so it makes sense that an advanced civilization would have an advanced surgical treatment for alsorts of different things that would help people. Is it so hard to envision or acknowledge that an already established "ancient Peru" had a highly sophisticated medical knowledge and surgical treatment knowledge? I don't think it's hard to understand or believe I mean just look at their level of detail and unprecedented understanding of architecture and design, philosophy and music.

As well as planning, they where master's of organization of such thing's as education, their implementation of astronomy and languages, mathematics for that matter and other highly advanced technological know-how was well ahead of their timeand it all point's to "yes" they could have been grafting skull patches, replacement of bone with a metal patch (for want of a better word) which allows us (or at least it should) to see them as the original architectures of the modern world of which thos is just another example of what we take for granted was already taken for granted a long, long time ago.

So absolutely not, it's not hard to believe that this could have come into existence in the time of the ancient Peruvian people. They had the expertise and the knowhow of different scientific research so why not, why not have sn implant grafted onto a skull? It's totally feasible to suggest that this was occurring during the reign of the ancient people of Peru.

Make sure you read the video description in YouTube!