Corey Goode described the Giant's in the stasis chamber as been kept alive. That the ancient Giant was revived and are from 850 years ago. Thoughts.

Who can remember when in 2015 these ancient Giant's discovered still sleeping in stasis after thousands and thousands of years in a chamber?

I'm asking because it seems that since we had this very important incident uncovered through a brave whistleblower which hasn't been verified I must add, it's gone underground and apparently to China. But as you'll find out, Project Avalon has brought up some great questions about the authenticity of this and where is it now?

Okay, Project Avalon (I'm glad I read this page) the website has really thrown doubt on this Giant in the stasis chamber and it's thrown doubt on who owns it, does it still exist, where is it and why are people lying about owning it? 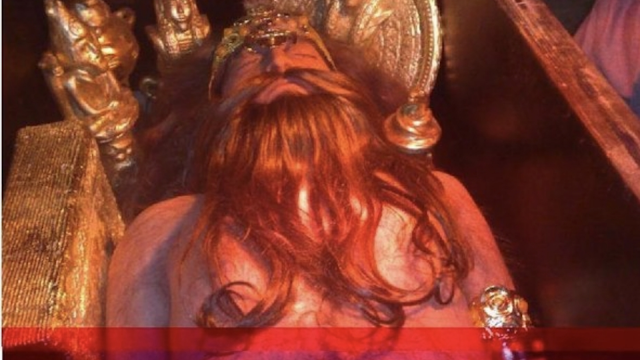 The builders found an underground mausoleum built 10-12 thousand years ago, with three sarcophagi. (later corrected to be about 850 years old).

I really don't know what to believe anymore because there's definitely misdirection and smoke and mirrors used in this story. What's true and what's fake? There's definitely sone truth, and some lies.

Videos cited by Goode have been subjected to a lot of "tinternet discussion". One of the videos dates to a discovery in 2008 following excavations for a building in the Kurdistan region of Iran in which a building was been renovated and a mosoleum that was obviously ancient and originally dated to around 10 to 12 thousand years ago. It was then "reserched again" but now it has changed to 850 years ago. Guy's you need to check out the link's in this post because I've linked to the bigger picture. There's way, way to much to write about and way to much media to show you all the inconsistencies between the original discovery of the Giant in stasis chamber to the artefacts now owned by the "Red Dragon Family". There's massive amounts of anomalies, read this post first if anything. 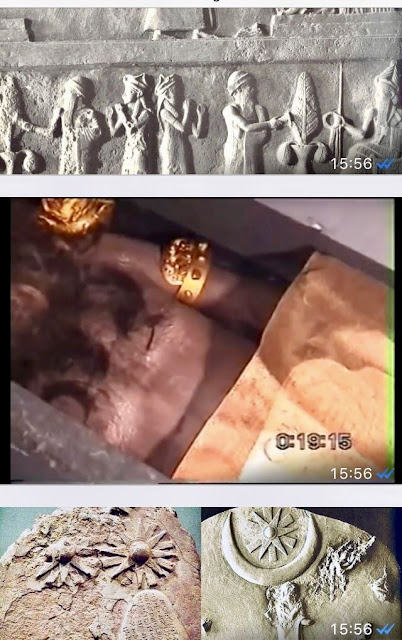 A google translation of a Russian article about the discovery follows:

According to data obtained from the presumptive enough reliable data source photos show found the sarcophagus and find in it the body of an ancient magician. All information supposedly obtained verbally, I have not been tested. Detection time — Spring 2008. As a result of the displacement of ground tomb came to light and the cultural layer of the remnants of the ancient city.

No matter what you think about Corey Goode, you can't argue with the results of what we see? Afterall, he's not the guy who discovered it, he's just bringing us all the information a kind of "don't shoot the messenger" should be applied I believe. 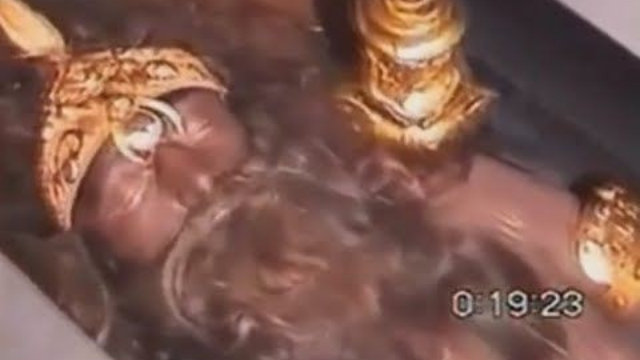 So, if you've got any knowledge of this "what was once everywhere" ancient sleeping Giants, please share your information below in the comments section.

There's plenty of golden objects inside of the stasis chamber and of course what looks like a human being but this one is purple in color? Maybe it's a pigment in the ink working with the stasis chamber to help slow the passing of time? Look, that's just a thought?Maybe it locks in the human into a cell within the chamber? Maybe it's just the actual color of this Giant's skin? You know what though, he doesn't appear to be a Giant to me? He looks normal sized, what do you think about it?

At the time of opening of the tomb in several deaths, some are in a coma to this day. Name Magician — Jaromir. The body is biologically active. Territory: Iran — Kurdistan — Senai. No accurate data. Age — about 12,000 years.

If he's a Giant then I'm needing to see an optician because he aint no Giant! But from the angle of the camera, maybe it's just been in the position that he's in.

"being originally built by an “Ancient Builder Race” who used crystal technologies to create time bubbles in which the flow of time on the inside is much slower than the outside. Thirty minutes can elapse inside the time bubble, while 30,000 years speed by on the outside according to Goode. He said that these stasis chambers with perfectly preserved giants inside them had been found all over the world.

According to Goode, the smart glass pads revealed that Abraham Lincoln had seen one of the stasis chamber giants in one of the ancient mounds found across the United States. This is supported by Lincoln himself who said:

The eyes of that species of extinct giants, whose bones fill the mounds of America, have gazed on Niagara, as ours do now.

Here's the extraordinary video which shows us the ancient Giant in stasis:

Seriously, if you know what happened to the ancient Giant in the video, I'd like for you to share with us all what you think or know happened, cheers.