Ancient Aliens in the form of Nephilim was genetically modified by putting Humans and Angel's together. It's an age old process. Ancient giants.

Let's just see what happens when I poke this "huge - ancient Giant's, Bee hive" because it's something I have been researching for a very long time.

The ancient Nephilim or the "Fallen One's" which is the literal translation which is how it's also been described as. Between 8 and 15 feet tall, these talk being's (or super entities) where super in all aspects. There's reference to these in the Bible as well, but your very welcome to research it and see it however you want to for yourself. It doesn't matter really because these extreme beings are called "the missing link" and that's exactly how some people have described these Nephilim Giant's - which where definitely walking upon this Earth some thousands of years ago?
It's a case of the ancient Aliens coming to Earth and modern scientist's are gonna find a lineage of ancient giants in the genome and it's gonna open up a whole new science but of Extraterrestrials in DNA form.
Watch the awesome video below:
The story goes that humans could be the anomaly and Giant's where prevalent;
Someone or something was called the missing link (Nephilim) which was created from human beings and Angels coming together to procreate and begin the Giant's race. Was humanity the anomaly and was Giant's the real original and most abundant? It's a different way to look at this point of view, but it's absolutely amazing. That's literally what this video is saying. It's trying to convey the message that Angels came to Earth and took humans and created a hybrid species which was called the Nephilim. Which one outlasted the other, how long ago was it? Is our timeline right or wrong? There's way to many inconsistencies between history which is accepted, and history which is in a leading book. Which do we accept... 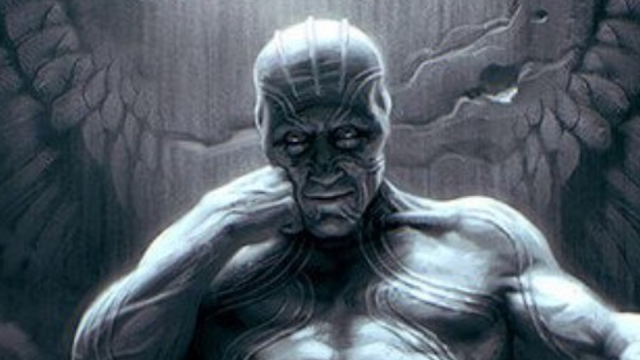 Credit: History Channel/UFO Sighting's Footage/UFO News/Canva.
There's a DNA timeline, there's a definite strange parallel reality running side by side. Some races "still have Neanderthal DNA" believe it or not - it's still within their own genome so to, it could be that there's trace evidence of Extraterrestrials in the form of a small piece of DNA just in people's actual being. Im pretty sure that this is already known seeing as though the human DNA has been sequenced already.
Oh it's hard to get my head around but this is "exactly" what the ancient story goes by. It's an accepted theory which without the research, it would never have sat right with me, but it's been researched and people are becoming aware, more and more of the Nephilim Giant's which is a good thing. There's been ancient giant bones discovered around the world (Smithsonian). Check the video, I just want to bring you meaningful information which this video has in buckets.
Hybrids and Giants, genetically modified and deliberately created entities are real - we humans are creating such things every year so why do people still think it's something that is impossible to achieve? We're creating monsters every year from clones to not so cloned and so called scientific achievement's like using pigs hearts to keep people alive! It's a genetically engineered world and what's happening ain't sitting right with me, where the hell is it going to be in say, 50 years? So when I talk to you about fallen Angels, please, please don't be shy to say what you think. Please leave a comment.
These fallen Angels; i.e Aliens are such being's that are overly tall and over achiever's whigh are I suppose, people whom are all part's of the bigger picture. Why would the ancient builders be putting their best at the beginning of the human timeline story?
Ancient Humans and Angel's came together in a rendezvous at the beginning of time and created the Nephilim Giant's of which was a species of Giant's. A very tall species with extraordinary capabilities the likes of which is not understood and the only reason why we can understand all of the information together is because of a certain few people.
Related post
Astronaut Carved Onto Cathedral In Salamanca, Spain Here's The Truth
Nobody has the ability to point out the future, but anyone can research the past, anyone!
Nobody has ever had the innate ability to access forbidden knowledge and that's it guy's. On the other hand my friend's people can be born with innate abilities like sitting at a Steinway piano and playing a Bache or a  Humans nowadays are average by any means, we're small and bespectacled, we haven't flaws, we have defects and it's clear to anyone else who wants to connect religion the
Only limited by our own prejudices and inability to understand which evidence has been discovered in various places on Earth. It's a very odd, frowned upon and even something that the Church was terrified of - so when evidence of the Nephilim was found, it was quickly covered up. It goes against the establishment, it goes against the machine! But why I ask you, why would a truth seeking religious order ignore and cover up the existence of another branch of our species humanity? existed for a reason, ancient humanity has had a purpose since the Angels took mankind and created a race of Giants from the beginning of our time! It doesn't matter how I say it and it certainly doesn't matter about anything else other than that which is the truth.
Ancient Giant beings where walking upon this Earth because it was all by ä was
Related post
Tiny Alien Looking Being Is Actually Human With 9 Ribs We Was Wrong
Looking at specific certain parts of history for instance, like when Giant beings was said to have roamed the te existed we can find tons of ppl look evidence rela it's a good place to begin the truth and search for any incons
Related post:
3000 Yr Old Ancient Astronaut And Spaceship Artefact Found In Museum
There's lot's of hidden messages in our official time line fine print but is it really deliberately on purpose? And I'm basing it on this, there's the original authors first hand way of writing about what really happened, while a short time after this testimony decade or a quarter of a century later someone's adding another version that has been but history and it's all based on third hand testimonials and even heresay - including interpretations of so called mainstream media. Misconceptions and belief, it's easy to get lost inside tons of stupendous information which on the whole looks and sounds otherworldly, but is it really otherworldly...
There's no turning back, there's no lying and there's nothing and I repeat "nothing" than it it could look it or not but there's a lot of evidence around the ancient world which
Here's the epic video that was uploaded to YouTube by the History Channel:
Please like and share this post with anyone whom you think would appreciate it. It's an information bonanza with a post on the UK's UFO website number 1 because I've put effort into the post's that I've created. It's worth more than any other people's UFO favorite website, I've wanted to put all my effort to investigate such UFO stories and it's all coming to light.
Here's your chance to get free Canva multimedia, by using this link we will both be able to get free Premium photos, icons or illustration's for free. It's a good thing, Canva's probably one of the best multimedia presentation editors and all round design editors of everything that you'll ever need! Here's the link:
Credit: History Channel YouTube Channel/Uf itUFO Sighting's Footage/UFO News/Canva.