Circle Of Light Appears Over Block Of Apartments

A dimension portal opened up over Beijing City while people was walking around just filming it. I'm surprised they allowed it to be seen by people.

I went to search for a UFO sighting that I'm researching and I have come across this amazing circle of light which seems to be catching everyones attention.

Just to set the scene and atmosphere, scientist's are 100 percent building a portal machine, for real it could already be built by now! Check this out.

Related post
Black Ring Appeared Above A Busy Highway
Scientists in Oak Ridge National Laboratory in eastern Tennessee hope so, and have completed building equipment they are to test this summer which may allow us the first glimpse of a parallel universe which could be identical in many ways to our own, with mirror particles, mirror planets and possibly even mirror life. 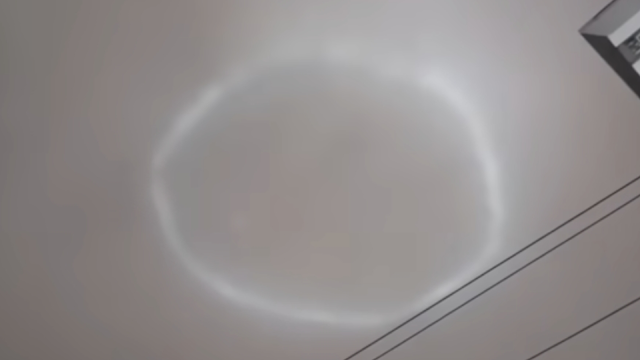 Credit: The Independent/South China Morning Post YouTube Channel/UFO Sighting's Footage/UFO News/Ufosfootage/Canva.
Video description:
Videos of a white circle of light hovering above Beijing city have gone viral on the country’s social media platforms. The local meteorological bureau later explained it was just a reflection of the lights from a rehearsal of the closing ceremony for the 2022 Paralympic Winter Games at the National Stadium.

And if you believe that, you'll be the first person in history to be told a true answer and believe a true answer! Personally, I'll actually like to see some hard evidence.

I've actually written a post before about a very similar looking "inverted circle of light" because the one that I wrote about was a black circle so it's technically the opposite to this one. I definitely prefer this one and that's because of it's almost a phenomena!
It's a circle of light, for one light doesn't bend, turn round corner's or definitely, it definitely doesn't appear over Chinese Cities in the shape of a circle, so everything about this is wrong, it's upside down and going against physics's.
Light, especially in a circle conjures up images in the imagination of stargates, portals and dimensional doorways. Apparently this was the rehearsal light's from the 2022 paralympic winter Olympics lights shining up?
If you think that sounds "off the beaten track, take another gander at the photo from the video and re-read what I've just written? Exactly, it is what it is, right? Beijing, China, who knows what technology is being exploited, advanced under dubious circumstances and guy's if one thing you should look up about China is the advanced technological marvels that are being figured out over there. They've got bigger appetite's for advancing humanities modern marvels and they'vr certainly not got any hang ups like the western world where cloning is illegal, stem cell cloning and other extremely sophisticated technological advancements.

Okay, basically if it's frowned upon in the US or the UK and it's only a matter of time before someone takes the plunge to say "clone people" or hybridization of people. Then you can guarantee that it is not going to happen in the UK or the USA. It's going to be places where they don't have laws for such things.

And that brings me full circle to stargates, portals and other technology which is more than likely going on in China. So what are we looking at here? If it's real, which I'm guessing it is very real, then it's got to be a man-made wonder of the world, albeit probably by accident because of where it is located? Or it's deliberately placed there with whatever the technology is creating this or "opening this up" here over Beijing, China.
Here's the really bizarre phenomena video that happened over Beijing China and was uploaded to YouTube by South China Morning Post:
If you know someone who would like to see this post, please can you share it with them, thanks. Also if you've got any thoughts or opinions on what this portal type Stargate is, then please by all means share your thoughts and ideas with us all in the comments section below, cheers.
Credit: The Independent/South China Morning Post YouTube Channel/UFO Sighting's Footage/UFO News/Ufosfootage/Canva.